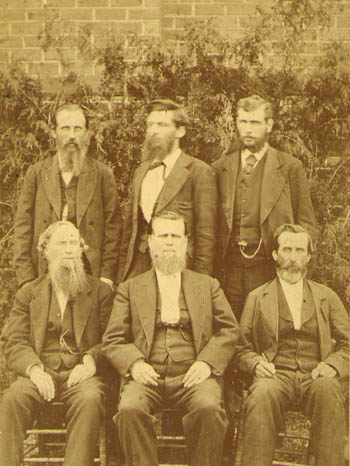 LEMUEL JOHNSON (15 January 1828 – 29 April 1900) taught for more than thirty years the entire mathematics curriculum at Trinity College when it was a fledgling institution located in Randolph County, North Carolina.

Though there is no present building or other monument to his name at Duke, the Rubenstein Library holds in various collections a small memorial to this pioneer faculty member in the form of four manuscript letters, a mathematics primer that was widely distributed during the Civil War era, a carte de visite of him and another of the Trinity faculty of the late 1870s, and an 1887 map of Durham County printed from his own manuscript map, the first published presentation of the bounds of this county after its formation in 1881 from sections of Orange, Wake, and Granville.

He was the second graduate of Normal College, Trinity’s predecessor, when it was a very humble institution situated in a rural, red clay, Quaker-Methodist corner of the Carolina piedmont. There, beginning in 1852, he taught courses in arithmetic, mensuration, algebra, geometry, trigonometry, and calculus as well as performing the duties of college treasurer, librarian, and first president of the Trinity College alumni association.

Among his most memorable achievements as an educator was his tutoring of the gifted Giles sisters, every evening in his parlor after a full day of classroom teaching. Mary Z. Giles, Persis P. Giles, and Theresa Giles were graduated with the Trinity class of 1878 (although segregated into a “Ladies” column with less than full membership), an event that the Wilmington Morning Star reported as “unprecedented in the history of North Carolina colleges.” Indeed, the celebrated Sallie Walker Stockard, early historian of Alamance county and first female matriculate at the University of North Carolina, received her diploma in Chapel Hill in 1898.

In the last years of his life, Professor Johnson supported himself through hard times by teaching in rural high schools and by working intermittently as a civil engineer, and his maps of Randolph and Davidson counties are available online via the NC Maps site.

Post contributed by David Southern, Rubenstein Library researcher and Managing Editor for the Collected Letters of Thomas and Jane Welsh Carlyle at the Duke University Press.

In the Lab: Conservators Don't Like Tape!
A Hidden Map
A Melancholy Skeleton

One thought on “A Thoroughly Forgotten Duke Figure”