Recently part of the McKeen-Duren Family papers was brought to the lab. Two boxes of approximately 40 daguerreotypes and ambrotypes were in need of better housing. Most of the photographs are of the close family of Silas McKeen. Silas was born in Corinth, Vermont in 1831 and was a Congregational Minister in Bradford, Vermont for much of his life. At some time, a family member had attached slips of paper inside each of the cases with a description of who was depicted in each photograph. Inside the case of a photograph of Silas’ daughter Philena was a longer caption: 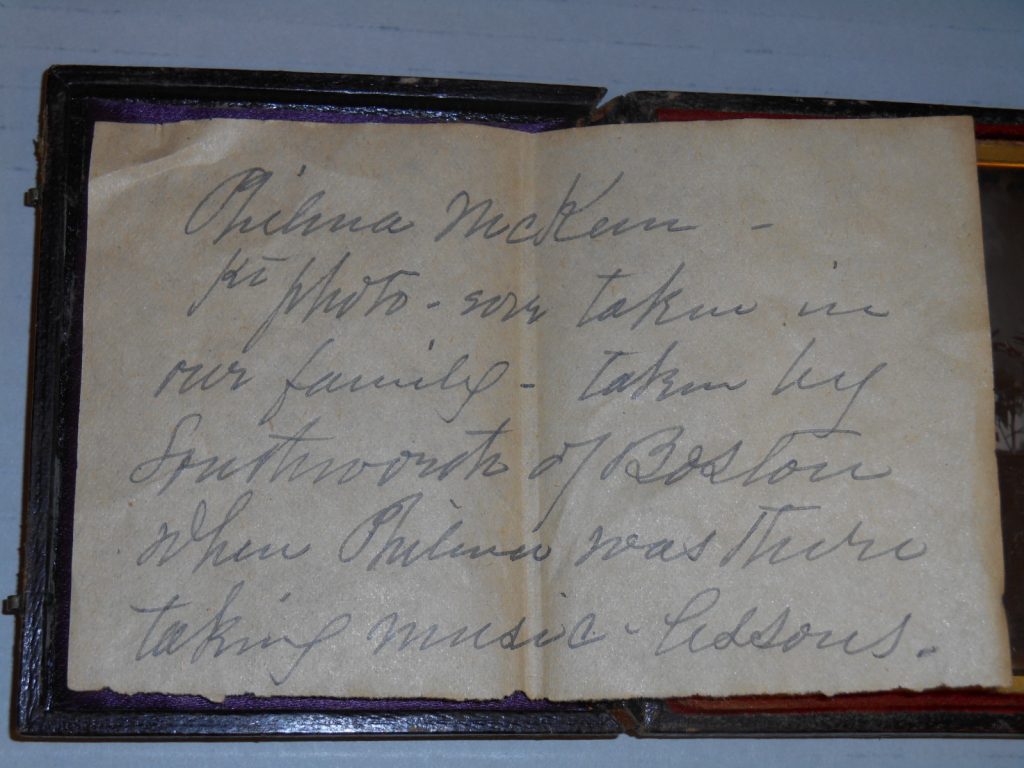 “Philena McKeen-
1st photo ever taken in
our family – taken by
Southworth of Boston
when Philena was there
taking music lessons.”

The name Southworth jogged my memory. Back in May we were treating True Flag, a newspaper published in Boston from 1851-1908. While encapsulating an issue from Saturday July 15, 1854, I had noticed an advertisement for daguerreotypes and taken a photograph of it. 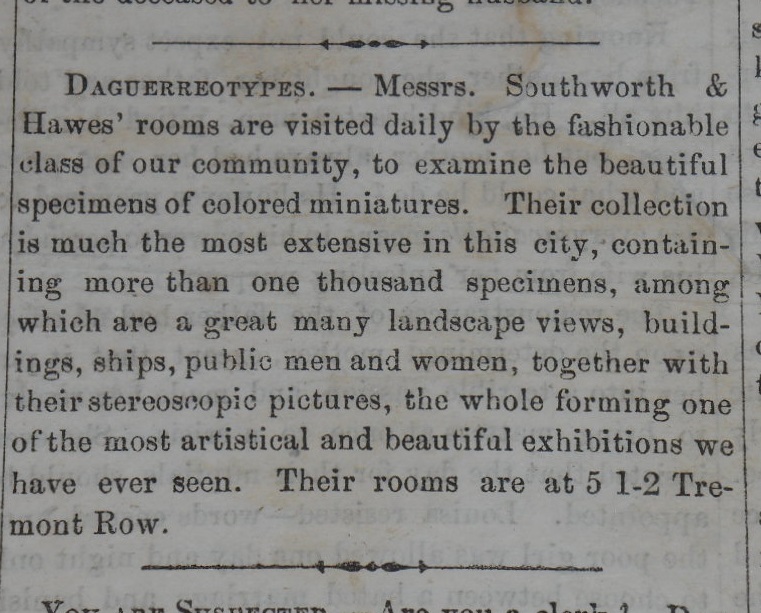 Southworth & Hawes was a prominent photography business active in Boston in the mid-1800’s and well known for their portraits of notable people of the day, including Henry Wadsworth Longfellow, Ralph Waldo Emerson, and Harriet Beecher Stowe. The daguerreotypes of Albert Sands Southworth and Josiah Johnson Hawes are held today in the collections of The George Eastman House, The Metropolitan Museum of Art, and the Museum of Fine Arts Boston.

Curious to learn more about Messrs. Southworth & Hawes, I requested a couple of books from Duke Libraries and noticed something repeated in their images:

Like the backdrop on class picture day, it looks like certain props and settings were used repeatedly in the studio of Southworth & Hawes; A table with a floral patterned cloth, a potted plant, and a book seem to have been an especially popular combination of props. The specific fern-patterned cloth draped on the table beside Philena even makes an appearance in a number of other photographs. A daguerreotype of Harriet Beecher Stowe at The Met looks especially similar.

Along with celebrities, Southworth and Hawes took a number of photographs of their own family members. Although not the best example of their work, in this photograph of Nancy Southworth Hawes (wife of Josiah Hawes and sister of Albert Southworth) at the MFA in Boston, she appears to be holding the same highly decorated book as Philena.

Unlike the fern-patterned cloth and potted plant that popped up again and again, the photo of Philena and the photo of Nancy are the only two I found where this specific book was identifiable. I wonder if the book was just another prop sitting around the studio for patrons to use, or if it held some greater significance. Interestingly, Albert and Nancy Southworth grew up on their parent’s farm in Fairlee, Vermont; less than 10 miles from Philena’s childhood home in Bradford. Is it possible these two families knew each other before meeting again in the Boston photographer’s studio?