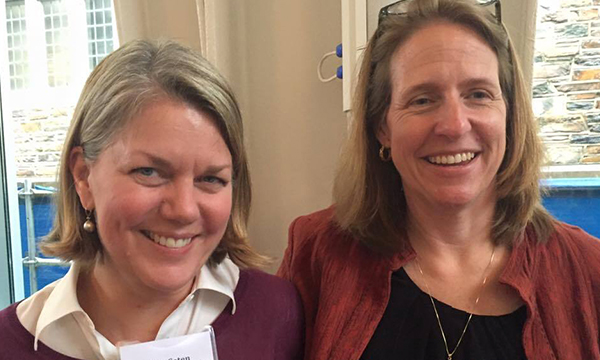 On Monday, December 5, 2022, the Duke University Libraries lost a longtime colleague and treasured friend. Sara Seten Berghausen, Associate Curator of Collections in the Rubenstein Library, passed away at the age of 53 after a heroic fight with cancer. She will be deeply and greatly missed by many in Durham, at Duke, and especially here in the Libraries.

Sara had a long career at Duke—so long that her email address was simply sara@duke.edu. She worked here for just over two decades, during which time her curiosity and expertise led her to hold positions across this organization.

She could boast degrees from both ends of Tobacco Road, including two from Duke. She came here as an undergrad on scholarship for flute performance, only to discover a passion for Russian literature and culture that led her to earn a bachelor’s in Comparative Area Studies and Russian (1991) and stay on for a master’s in Russian Literature (1993). Sara made many lifelong friendships while a student here, most importantly her future husband Alexander (Sasha) Berghausen, whom she met when they both played as undergraduates in the Duke Symphony Orchestra. They married in 1993. She added a second master’s from UNC’s School of Information and Library Science in 1996.

While a grad student at UNC, Sara returned to Duke as a library intern, first in our International and Area Studies Department and later in what was then called the Reference Department in Perkins Library. Several years followed working for the library systems at the University of Chicago and University of Texas at Austin, before she returned to Duke in 2001 as Librarian for Literature and Theater Studies, a post she held until 2014. Ever generous and open to new challenges, Sara also covered the occasional critical vacancy, spending a year as Interim Film and Video Librarian in Lilly Library and another as Interim Slavic and Eurasian Studies Librarian. In 2012, she was promoted to Head of the Humanities Section. Since 2014, she has served as Associate Curator in the Rubenstein Rare Book & Manuscript Library. It was a job she loved, as anyone who spent five minutes in a classroom with her could tell.

Her portfolio as curator included the Economists’ Papers Archive, where she worked with a number of Nobel Prize winners, and wide-ranging literary collections. The latter spanned a multitude of fascinating and notable collecting areas, covering a broad swath of British and American literary history, comic books, science fiction, utopian literature, and Southern writers, including a number with strong Duke connections, such as William Styron, Fred Chappell, Reynolds Price, Michael Malone, Anne Tyler, and Allan Gurganus. She also supported archives related to Duke, Durham, and theater studies, including the Synergetic Theater and Manbites Dog Theater. Sara loved working with scholars, writers, authors, and theoreticians to preserve their papers and develop curricula and public programming around them. Collection donors and researchers deeply respected her expertise and were drawn to her warm and lively personality.

As Sara’s supervisor and friend, Andy Armacost, put it: “Sara had strong relationships across campus and in the Duke community. In her time in the Duke University Libraries she helped our library, our campus, and our town feel a little more connected. She helped librarians, students, faculty, and the community to better know each other.” The person who knew your children’s names and where they went to school, asked about your ailing parents, or brought you food when you were home sick—that was Sara.

Sara was also an active campus citizen. Among the many Duke extracurriculars she participated in, one of her favorites was the Common Experience Reading Committee, where she spent nearly fifteen years reading and debating which book the next class of Blue Devils should read. She had a gift for bringing people together over books and ideas, and she shared that gift freely, enthusiastically, and daily. She was a committed undergraduate academic advisor and provided advice and guidance to hundreds of students over her career. Sara also provided support to fellow working parents by helping to establish the parents@duke listserv in the early 2000s as a way to connect and find parenting resources within the Duke community. It’s no exaggeration to say that Sara bled Duke blue, and her insider perspective as a Duke alum made her an especially good librarian, advisor, and co-worker.

Sara was committed to social justice, and to Durham, and she led by example both at work and in the Triangle community. The list of nonprofit organizations for which she volunteered or served as a board member could fill a whole page, including Schoolhouse of Wonder, Preservation Durham, Urban Ministries, and St. Phillips Episcopal Church, among many others. She greatly admired the work of the Equal Justice Initiative, and one of the highlights of her career was meeting founder Bryan Stevenson after his book Just Mercy was chosen as the summer reading pick for the Class of 2020, thanks to Sara’s advocacy on the selection committee.

After she died, those of us in the Libraries began to share some of our fondest memories of Sara with each other. But because she touched so many lives, we wanted a space for the entire Duke community to be able to share stories and reminiscences about her, virtually. If you’re reading this and would like to contribute your own memory of Sara, please drop it in the comments section below. We’ll be sure to include it.

Sara leaves behind many friends in Durham, at Duke, around the country, and internationally. We wish to express our deepest sympathies in particular to Sara’s family, especially her husband Sasha; children Alexander, Ellen, and Jane; parents Charles and Nancy Seten; and her brother Charles Seten. Her library family grieves with you.

The night before Sara passed away, her close friend and colleague in the Rubenstein Library, Meg Brown, sat with her and read her a poem by Wendell Berry, which we would like to close with—in grief and in cherished memory of our good friend, Sara.

The Peace of Wild Things
by Wendell Berry

When despair for the world grows in me
and I wake in the night at the least sound
in fear of what my life and my children’s lives might be,
I go and lie down where the wood drake
rests in his beauty on the water, and the great heron feeds.
I come into the peace of wild things
who do not tax their lives with forethought
of grief. I come into the presence of still water.
And I feel above me the day-blind stars
waiting with their light. For a time
I rest in the grace of the world, and am free.

All are welcome to join in celebrating the life of Sara Seten Berghausen at a memorial service on Saturday, January 7, 2023, at 2:00 p.m. in Duke Chapel. The service will be followed by a public reception hosted by the Duke University Libraries in the Gothic Reading Room on the second floor of Rubenstein Library.

The family has asked that gifts in Sara’s honor be directed to the Equal Justice Initiative. Donations can be made through their website. Be sure to check the box that says, “Dedicate my donation in honor or in memory of someone,” to indicate your gift is in memory of Sara Seten Berghausen.