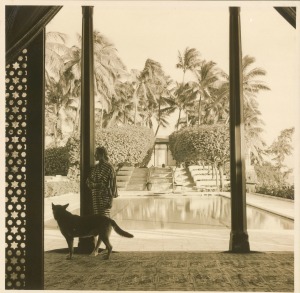 As we cruise into summer after another busy semester, here’s a rundown of some notable recent news stories about the Rubenstein Library:

New York’s Museum of Arts and Design is preparing an exhibition entitled “Doris Duke’s Shangri La: Architecture, Landscape, and Islamic Art,” according to GalleristNY.  The story features a beautiful photo from the Doris Duke Papers on the Shangri La Residence here in the Rubenstein. The exhibition is scheduled to open on September 7, 2012.

Two stories in the Durham Herald-Sun document the Rubenstein Library’s May 15 event to celebrate the publication of Reynolds Price’s final memoir, Midstream, and the fiftieth anniversary of the publication of his first book, A Long and Happy Life.

The Raleigh News and Observer reported on Durham County Library’s Comics Fest.  Rubenstein Assistant Curator Will Hansen spoke about the Library’s comic book collections on a panel entitled “Comics Go to College” with colleagues from Duke and UNC.

The May/June issue of Duke Magazine features a piece on advertising pioneer David Ogilvy, whose career is documented in the Kenneth Roman Papers; an article about Princess Irene’s 1967 visit to Duke by University Archivist Valerie Gillispie; and a column on the American Family Robinson radio serial, rare acetate discs of which are preserved in the Randy Riddle Collection of Race Records and Radio Programs.

Look for more exciting news about the Rubenstein Library in the coming months!