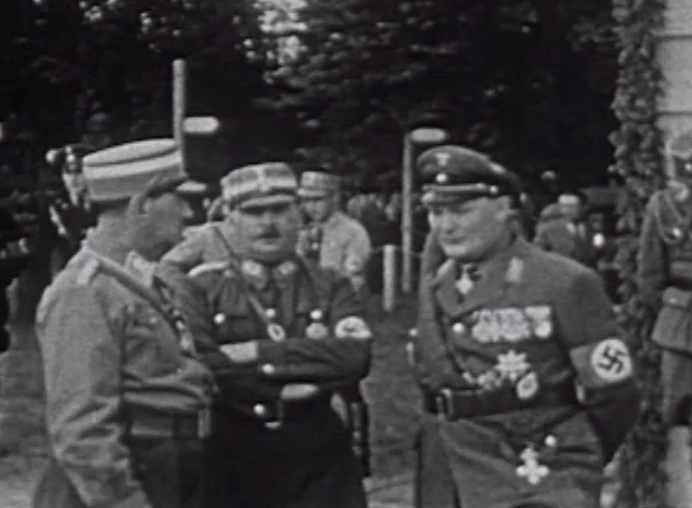 A group of three uniformed men stand together in silence and black-and-white, engaged in what one imagines is small talk.  They are outside, others like them mill about, the mood one of dulled anticipation.  The men are obviously enjoying the extended gaze of the camera but not certain what to do with it.   One of them is Hermann Gӧring.

The scene comes from a film so long on the shelves at Duke no one could say where it came from.  It was simply titled “Hitler Youth Rally, 1936, Nuremberg.” I was attempting to provide a student with a primary source for a paper he was writing on Nazi propaganda, and hoped this film could help.  But I needed better description.  Our electronic catalog yielded a brief record listing the same title and nothing else, only that it was cataloged from an accession record.  But the paper files we keep on our collections had nothing under “Hitler,” “Nazi,” or “Nuremberg.”  I emailed some colleagues to see if they could help my search, and in the meantime began to analyze the film for clues as to its origins.

The film’s most immediate message was that it was a 31-minute, 16mm, black-and-white newsreel printed on Agfa stock and bearing the Agfa logo, silent but with descriptive intertitles.  Gӧring’s was the first face I recognized.  The two other men with him were mysteries but I thought had to be of similar high position — definitely Nazis, but Hitler Youth, no — and within a few minutes googling I found one of them was Ernst Rӧhm, head of Hitler’s dreaded street gang, the Sturmabteilung (aka Brownshirts).  Rӧhm was close to Hitler but, homosexual, an ardent socialist, and holding that the German army should be absorbed under the S.A., was increasingly considered a liability by the Nazi command.  In 1934 Heinrich Himmler falsely told Hitler that Rӧhm was plotting an overthrow, and Hitler had Rӧhm executed, during the purge known as the Night of the Long Knives.  I was fascinated, taking one step forward and moving one step back.  There was a story in this film, but neither was it about Hitler Youth nor did it date to 1936.  So what did we really have here?

As the film unfolded it was clear the setting was the Zeppelinfeld at Nuremberg, where the Nazis held their annual rallies.  I thought if I had a point of comparison, it might be possible to place the year the film was made.  The most obvious choice was to see if Leni Riefenstahl, the image maker of Hitler and the Nazis in the early 30s, had shot a Nuremberg rally prior to her stylistic landmark, Triumph of the Will, which documented the 1934 rally and which, importantly, did NOT include the recently expired Ernst Rӧhm.  And indeed, Riefenstahl had made a film of the rally in 1933, the year in which the Nazi propaganda machine was officially established under Joseph Goebbels.  However, all copies of the 61-minute Der Sieg Des Glaubens (Victory of Faith) had been destroyed following the purge, in an effort to expunge Rӧhm from Nazi history.  All but one.  And that copy, conveniently, had been digitized and published to the Internet Archive.  I downloaded the Riefenstahl film, set up two video playback windows on my computer, and began a comparison.

What you’ll find as you look through films of the Nuremberg rallies is that a standard narrative tends to be followed:  there are preparations on the Zeppelinfeld as crowds pack the town of Nuremberg proper, followed by the arrival of the high command and Hitler and their international guests – in the early 30s this included England as well as Spain, Italy, and Japan.  Then the speeches and incessant marching, perhaps an interlude where the Hitler Youth are shown setting up their tents and camping out as if at a boy scout jamboree, and ending with a speech where Hitler delivers his menacing vision of German supremacy.

It was when Hitler stepped off his plane in Riefenstahl’s film that I found my first clue.  I remembered a similar spot in our newsreel, and when I lined the scenes up and ran through them several times, I realized it was exactly the same moment, shot from different angles.  Marvelously, the films’ respective cameramen could be seen in the others’ shots.  Confirmed: this was 1933, the year before Rӧhm was killed and all traces of him destroyed.  I ran through the film trying to find similar points and discovered that in several places our photographer and Riefenstahl’s photographer probably stood shoulder-to-shoulder.

I began to wonder about the rarity of our film, and as I started to reach out to other archives I also prepared the filmfor presentation, creating a finding aid and uploading the movie to YouTube, at first as an unlisted resource so I could share it with other archivists who could help with its identification.  Lauren Reno, our rare materials cataloger, began refashioning the catalog record, while Sarah Carrier, our Research Services Coordinator and a fluent German speaker, accepted the challenge of translating the titles.  During this process Sarah echoed Hannah Arendt when we talked about what these rallies were actually like, commenting that the film really brings home the banality of evil – “There must’ve been a lot of sitting around and waiting at this thing.”

As Sarah worked on the titles, I got an email from our University Archivist, Val Gillispie.  Val had found documentation for the film, picking up the trail in our old card catalog, which was recently digitized, and following it to a gift agreement.   Donated in 1967 by Duke Divinity graduate John Himes, the film came to us in two reels, and the original description stated, “This is perhaps a movie film with sound tracks.  It is a film of a Hitler youth rally in 1936 in Nuremberg.”  We have no idea whether Himes or the accessioning archivist described it so, or where Himes got the film, but there was enough information on the agreement to discover a little more about Himes.  During World War II he was a chaplain in the 506th Parachute Infantry Regiment, the inspiration for the television film Band of Brothers, so how he came to be in possession of the film spurs the imagination.  At some point after his donation, the two reels, neither one a soundtrack, became one, spliced together in the wrong order but otherwise unharmed.  Several years ago the film was digitized for preservation but no analysis was done.

While these pieces of the puzzle came together, I was contacted by Leslie Swift at the United States Holocaust Museum, who I had queried about the film.  The Museum did not have a copy of it, although they had shorter snippets of other newsreels from the 1933 rally (our film is by far the longest and most detailed after Riefenstahl’s).  Leslie is interested in the narratives of these propaganda films, and noted that one scene in our film, where Hitler is touching the Nazi flags with the flag that is being carried next to him, is something she hadn’t seen before in other similar films.  I talked with Sarah about this, who in doing her research found out it was a ceremony performed using the Blutfahne, or the “blood flag” that had been used in the failed 1923 Nazi uprising, to “sanctify” other flags.  The blood flag, always carried by Jakob Grimminger, was apparently lost after the war, and, grail-like, has its own cult of followers. (It is true that in doing research into materials such as this film, fascination and horror, with the past and present, mix together in equal parts.)

Leslie gave me a contact at the Bundesarchiv, to whom I wrote the next day.  According to Karin Kuehn, a film archivist at the Bundesarchiv, the film “seems to be a so called Schmalfilm-Monatsschau.  These were compilations of several newsreels for home cinema made by Agfa.”  Karin noted that the Bundesarchiv holds some of this type of footage, but only a few might be a match with our film.  I’m hoping within the next few months to be able to view some of that footage.

Re-discovering historical resources such as the Nuremberg Rally film is what makes my job such a joy.  This film and another film we have – in the Doris Duke Collection, portraying the trial of the 20 July conspirators in 1944 – presents two poles of the Nazi propaganda effort. The process we went through to identify the film, to dig a little deeper, will hopefully inform future research, and create a more complete picture of the past.