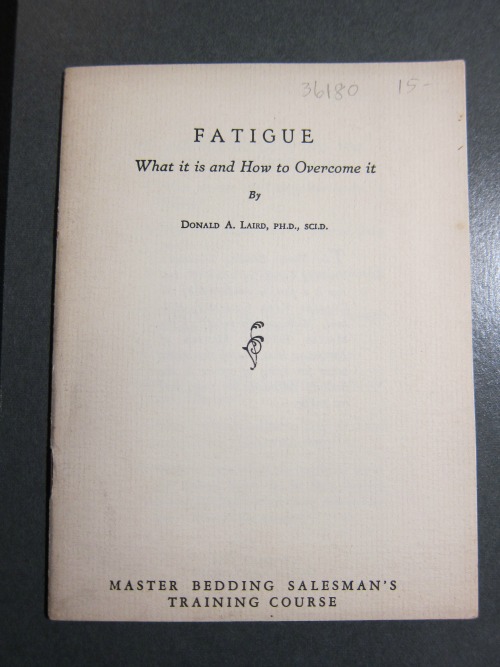 Recently the Rubenstein Library received an inter-library loan request that was quite appropriate for a drowsy Friday afternoon: Fatigue: What It Is and How to Overcome It, by Dr. Donald Anderson Laird. This short pamphlet, collected as part of the John W. Hartman Center for Sales, Advertising & Marketing History, was published in 1934 as part of the Master Bedding salesman’s training course. If you are pepless or suffering from other symptoms of late-semester fatigue, here are some suggestions from the booklet:

“The bed equipment should be used by the housewife for a few minutes several times during the day. It is not essential to sleep, but to lie down on a cushion that makes it possible to relax.”

“Sometimes excitement from the day makes it difficult to relax, even on a well-designed sleep cushion. The condition will be helped by a sleeping room that is designed and decorated to promote calming down emotionally by the judicious use of blues and greens.”

“The muscular relaxation coaxed by the bed cushion, in fact, will help mental calming down, just as a good way to overcome anger is to try to smile and not act angry.”

While this pamphlet was published almost 80 years ago and some of the advice seems less than scientific, this section seemed especially appropriate even today:

“The present generation probably needs at least better sleep than the previous generations. Radio programs, sleep-disturbing night noises from traffic, a greater assortment of time and energy consuming evening pleasures made possible by electricity all probably keep us from getting as much sleep as our fathers did. Then the emotional strain of modern high speed automobile traffic, and the present gnawing apprehension caused by the depression, also conspire to make us need the safety-valve of dreams as never before.”

Replace “radio programs” with “the internet” and “evening pleasures made possible by electricity” with “smartphones,” and that sentence is quite modern sounding.

The final section of the pamphlet gives advice to the Master Bedding salesman on prescribing the appropriate kind of mattress just as a doctor would prescribe a medicine. Naturally, the booklet warns against selling the cheapest mattress: “One’s bed is in reality one’s best friend, and to practice false economy at its expense is indeed false reasoning.” You wouldn’t be cheap with your best friend, would you?

Smile, paint your bedroom blue, and lie down for a bit. Doctor’s orders.

If you’d like to learn more, the Rubenstein Library also holds the companion pamphlet in the Master Bedding salesman’s training course: A New Mattress Era by Marvin C. Lindeman.