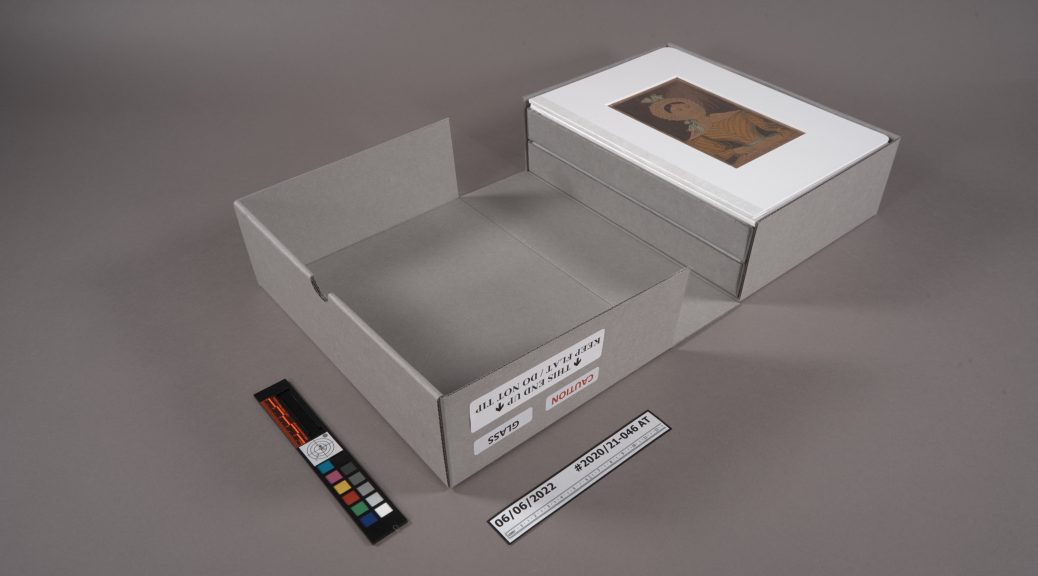 Sometimes an object comes through the lab in an enclosure which is not good for long term preservation, but still has artifactual value and should be retained with the item. In these cases, we have to get a little creative in fabricating a new housing that will keep all the parts together in a safe and intuitively usable package. A set of early 19th century hand-colored engravings arrived here recently, featuring portraits of the same female sailor on land and at sea. The paper was quite brittle and showed some staining, surface soiling, and insect damage. The prints had been housed in matching wooden frames which were slightly too small. The edges of the prints had been folded around the backing boards to fit, and some of those folded edges had snapped off. It was clear that the frames were not a safe place for the prints to live, but they are important to the history of the object and need to be housed together. Time to make some new outfits for these sailors.

After deframing, both frames and prints were cleaned to remove any surface dirt. The prints were humidified in a chamber and flattened to remove the creases around the edges. The loose fragments of the “shore” print were reattached using a thin Japanese paper with re-moistenable adhesive we make in-house. The brittle paper requires some additional support for safe handling and the media isn’t flaking, so each print was fully encapsulated in clear polyester film. The prints and frames would need to live inside the same box without rattling around, so I cut window mats and assembled portfolios with tyvek tape for the hinge. Each print was mounted inside with polyethylene photo corners, so that it can be easily removed if a researcher wants to examine the verso. The frames also got some new housing in the form of a padded tray. Each tray features tabs at the head and tail so that they can be easily lifted out of the box. The foam is notched under the tab to accommodate the metal ring at the top of each frame, but also so that the frame can be safely tipped out of the tray. The trays and mats were made to the same size so that they can be neatly stacked inside a  clamshell box. Labels on the outside of the box indicate that it should be stored flat on the shelf and warn anyone retrieving the item that it contains glass. I like to go back and check on rehoused items like this after they have received some use to ensure that the new enclosures are functioning well.

Micro CT of Many (Mini) Manikins
What's In The Lab: A Farewell to a Beloved Colleague
Quick Pic: Tiny Tin