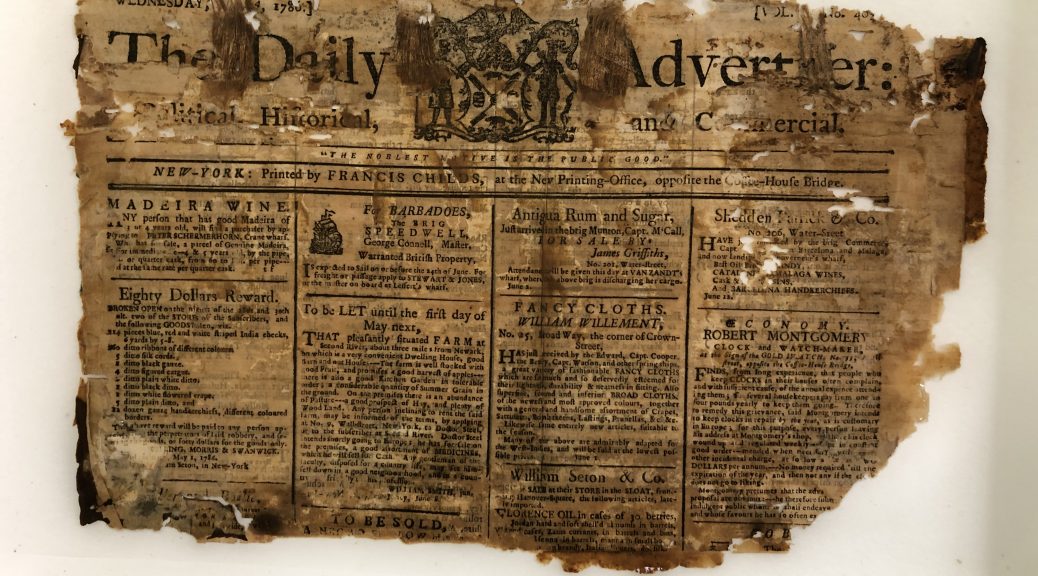 I recently shared some images of a 16th century printed book that is the lab for full treatment and I have since uncovered some additional information about the binding. As previously mentioned, the book was not in good working order when it was acquired, looking more like something left behind in the mines of Moria than a volume that you would be served in the reading room. With so much water damage and loss to the covering materials, it was clear in my examination that the remains of multiple bindings exist on the wooden boards. The outer-most covering is a “quarter-style” strip of brown leather (both adhered and nailed to the boards) and block printed, blue paper sides. Underneath that first layer are wide leather corners and a brown or purple paste paper siding-up the boards. The pastedowns have several layers of paper with both manuscript and print faintly visible underneath. The inner-most layers of covering material were adhered with a thick layer of hide glue, which has begun to fail either through age or the book’s exposure to moisture.  This made it possible to mechanically lift all the layers of pastedown away from the wooden board in one piece, revealing  the print waste. I was surprised to see a New York newspaper from the late 1700s, especially since the text was printed in Frankfurt some 200 years prior. The date at the top left was slightly obscured by minor losses and the remnants of fanned-out sewing supports, adhered to the interior of the front board. Luckily the full run of The Daily Advertiser has been digitized and is freely available through America’s Historical Newspapers, so I was able to look for dates in 1786  ending in “4” that occurred on a Wednesday and locate the issue.

I was able to repeat the process for the lower board and that pastedown actually includes the lower half of the same printed sheet. I would not have been able to identify it so quickly without a digital image of the full newspaper.

The print waste in this binding is a fascinating find on a number of levels. I will note that this particular newspaper is not uncommon, with many libraries holding copies; however, the advertisements printed on this page tell a number of stories. Many of the ads are focused on shipping, with cargo ships for sale and others for hire. There are advertisements for Canadian furs, Irish linen, glassware, and iron goods from England. My favorite is the notice describing a large reward for the perpetrators of a robbery or a smaller one for just the return of the stolen goods. But the darkest parts of our history are represented here as well: ships traveling from Barbados or Antigua carrying sugar and rum, redemptioner servants and slaves described as “healthy” and offered for sale.

We don’t have much information about provenance of this book, but the presence of this newspaper used as binding material gives us clues about when and where at least one of its many repair and rebinding campaigns may have occurred.  This important evidence will be stabilized and retained as part of the conservation treatment.