*sung to the tune of Cindy Lauper’s Time After Time

Older bound volumes in a research library collection have often been subjected to multiple interventions or campaigns of repair over the years. If a leather-bound volume has not been completely rebound, it has often been repaired in some visible way. One of the more common repair practices is rebacking, in which either new material is added underneath the leather covering the spine and boards or the spine is replaced entirely. In preparing the book for rebacking, original covering material may be removed, obscuring evidence of previous repair efforts. This second edition of the works of Samuel Johnson, printed in 1713, is more like an onion with many layers of repair material. 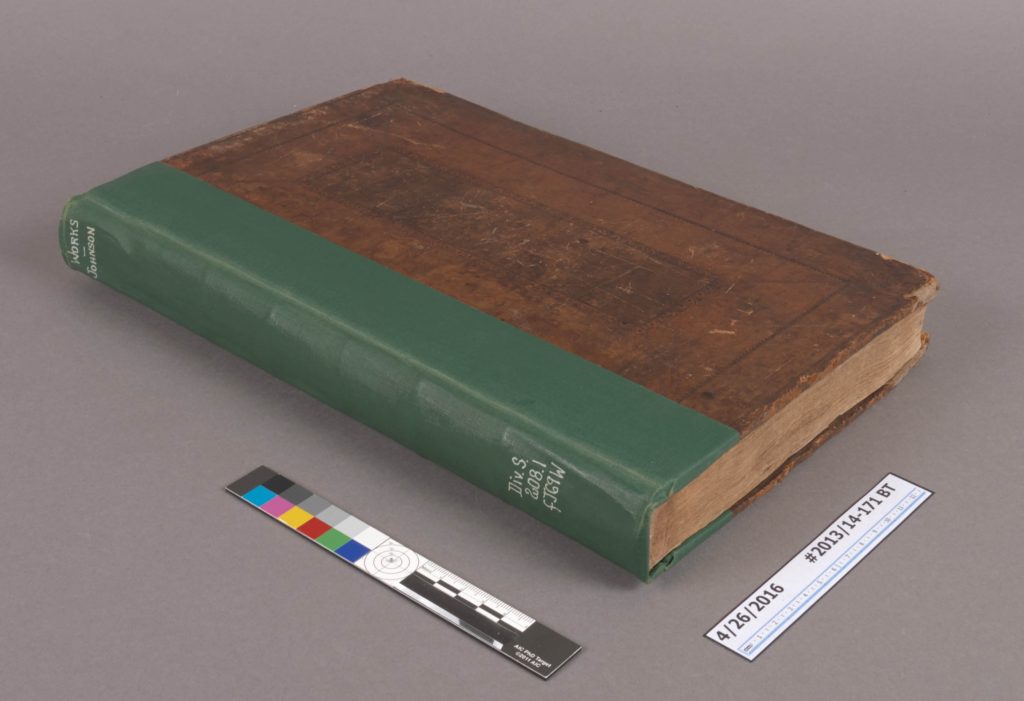 The current binding appears roughly contemporary to the text. It is covered in full brown calfskin and decorated with sprinkling and blind tooling in a style commonly referred to as the “Cambridge Panel“.  Many decades ago, this book was actually part of Duke’s circulating collection and was repaired using the typical techniques employed by libraries at that time. A strip of green buckram was adhered to the boards and spine with an acrylic adhesive and the inner hinges were repaired with strips of white textile. The repair is doing it’s job by keeping the boards on, but it is a little awkward. What used to be a tight-joint binding, now has a space between the shoulder of the textblock and the spine edge of the board. This pushes the boards out at the fore-edge and creates an unnaturally large square. 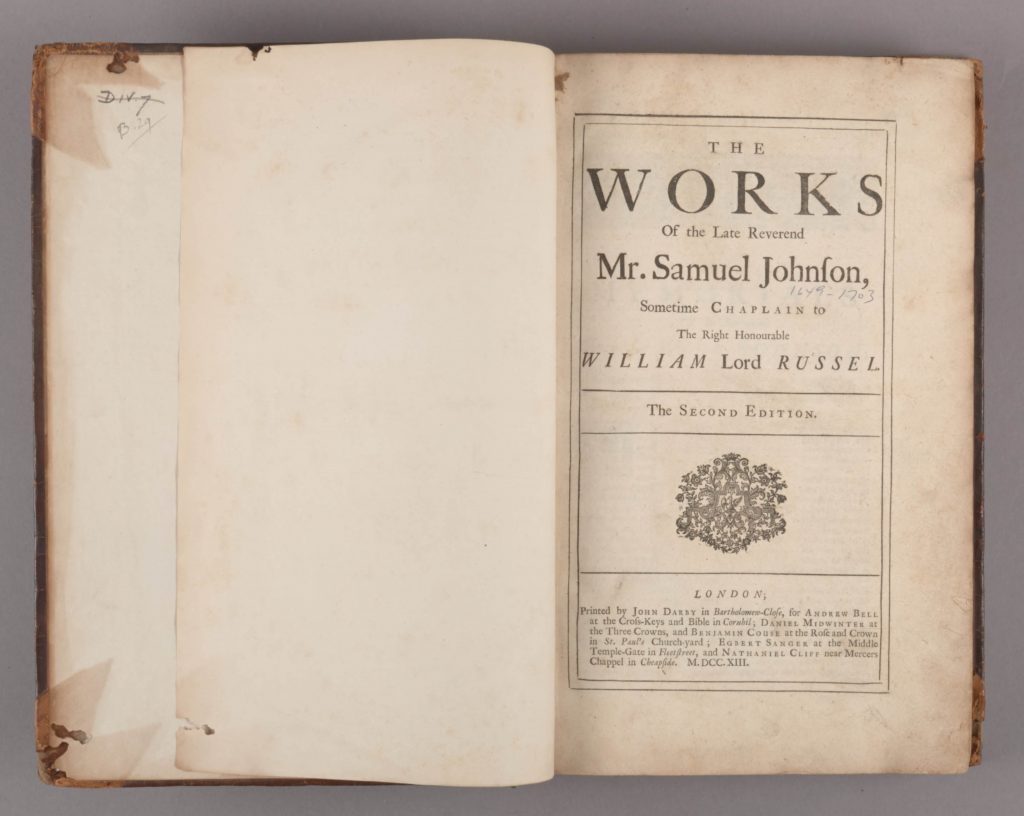 In my initial examination, it was clear that the book had been repaired before the green buckram, too. The endsheets had been replaced with a smooth, wove paper and somewhat crude sheepskin corner repairs were visible through the pastedown (see above). There is some obvious insect damage  at the corners of the front board, but interestingly the insects appear to have only liked the new repair materials. The original text and calf leather are un-chewed.

In discussing treatment options with the curatorial staff, it was clear that the unsightly cloth repairs should come off of this book. When I separated the binding from the textblock, though, I found another leather spine underneath. 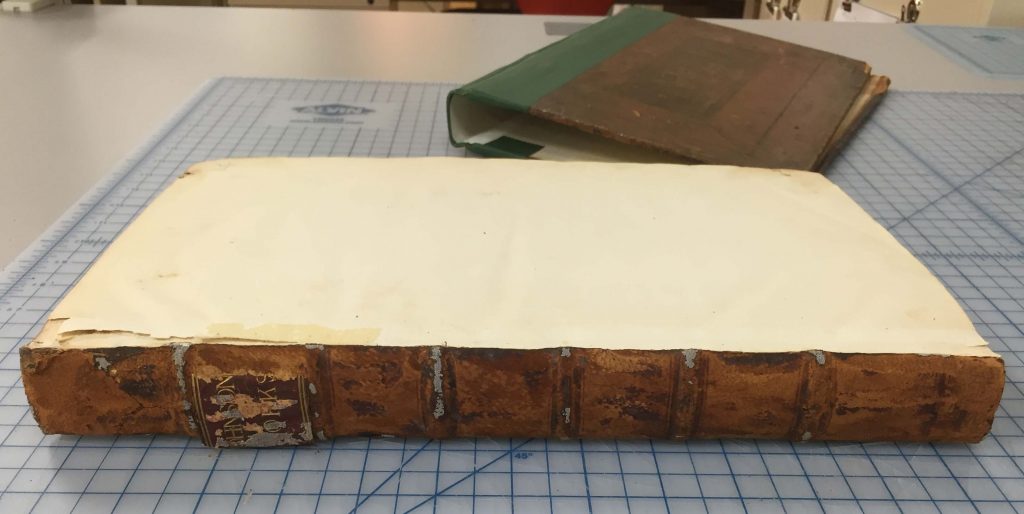 This is not the original spine of the binding. It appears to be a reback using the same sheepskin as the corner repairs. Most of the red leather label remains in the second panel, but the leather is quite powdery and large patches of the grain layer have peeled away. After further deliberation, the decision was made to also remove this spine material, since it was not original and in very poor condition. During removal of the second spine, however, something else was revealed. 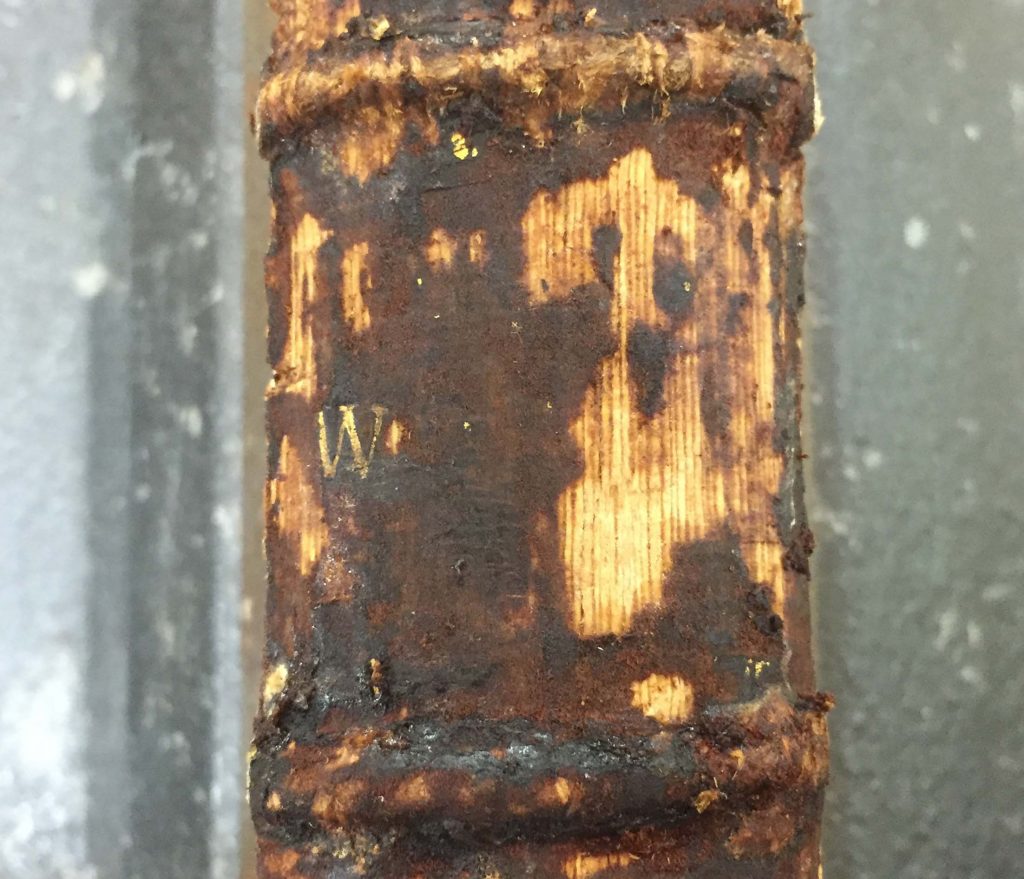 A gilt ‘W’ and a tiny piece of gold line are visible in the second spine panel. Could this be the remains of a third (and possibly original) spine? It is unclear.  While it does not appear that a full calfskin spine is underneath the sheepskin reback, it is possible that the reback was applied on top of small remains of the original spine. It is also possible that titling was added directly to the reback leather, but then because  of error or damage a red leather label was added later.

The textblock spine will be cleaned and lined with strong, high quality materials like Japanese paper and unbleached linen to create a better functioning book. The results will certainly be better than just following tradition and adding another spine on top.

Preservation Week: The Lab Is Hopping!
Is There An Award For Worst Binding Ever?
Making Burritos In Conservation

One thought on “Spine After Spine*”