The Great Art of Knowing

Award-winning avant-garde filmmaker and Guggenheim Fellow David Gatten will present his 2004 film, The Great Art of Knowing, an exploration of the library of William Byrd II, a prominent 18th-century Virginia landowner and author. Gatten is the 2010 Duke Distinguished Visiting Filmmaker in the Program of the Arts of the Moving Image at Duke University. His films have been included twice in the Whitney Biennial, and his work is part of the permanent collections of the Art Institute of Chicago and the Whitney Museum of American Art. 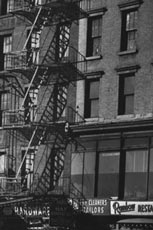 Courtesy of the Jazz Loft Project

The Jazz Archive at the Special Collections Library presents Sam Stephenson, director of the Center for Documentary Studies’ Jazz Loft Project, for a lunchtime discussion of the history of this fascinating audio and photographic archive. Stephenson will highlight some of the recent project activities, including a new book, radio series, and traveling photography exhibition. Guests are invited to bring their own lunches; dessert and beverages will be provided.

From 1957 to 1965 legendary photographer W. Eugene Smith made approximately 4,000 hours of recordings on 1,741 reel-to-reel tapes and nearly 40,000 photographs in this loft building in Manhattan’s wholesale flower district where major jazz musicians of the day gathered and played their music.

A reception to honor sixteen Duke faculty in Chinese Studies who have written, edited, or contributed to books on diverse subjects, including stone sculptures, aging, postcolonialism, film, and contemporary Chinese colloquialisms. 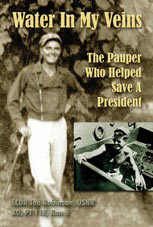 Theodore M. (Ted) Robinson T’40 and Duke military historian Alex Roland will discuss Robinson’s 2008 book, Water in My Veins: The Pauper Who Helped Save a President. The book recounts Robinson’s role in saving the life of John F. Kennedy on the night of August 1-2, 1953, when a Japanese destroyer rammed PT 109. 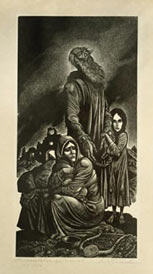 Fritz Eichenberg
The Lamentations of Jeremiah

Professors Eric Meyers and Kalman Bland will discuss artists’ visual interpretations of the Hebrew Bible as exemplified in the exhibit by a facsimile of a 15th-century illuminated manuscript, a traditional Torah scroll, and a selection of modern artist books and lithographs. Sponsored by the Libraries and the Center for Jewish Studies. 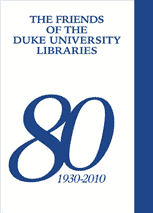 This year’s event will include a celebration of the 80th anniversary of the founding of the Friends of the Duke University Libraries as well as an after-dinner program, complete with musical performance, which will showcase the Jazz Archive at Duke.

Duke University has a long tradition of campus-based jazz performance, and several of the Jazz Archive’s collections document aspects of that history. These include the Les Brown Scores, the Sonny Burke Papers, the Linda Dahl Collection on Mary Lou Williams, and the Paul Jeffrey Papers.

Invitations to the Friends dinner will be mailed to members. If you have not received an invitation and would like to attend the dinner, contact Lizzy Mottern at lizzy.mottern@duke.edu. Special thanks to SunTrust Bank for their continued involvement as presenting sponsor and to on-campus partner, the Gothic Bookshop, for supporting the Annual Dinner.

November 10: Save the Date! 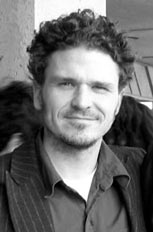 Dave Eggers is the author of six books, including Zeitoun and What Is the What, a finalist for the 2006 National Book Critics Circle Award. Eggers is the founder and editor of McSweeney’s, an independent publishing house based in San Francisco that produces a quarterly journal, a monthly magazine (The Believer), and Wholphin, a quarterly DVD of short films and documentaries. In 2002, with Nínive Calegari he co-founded 826 Valencia, a nonprofit writing and tutoring center for youth in the Mission District of San Francisco. In 2004, Eggers and Lola Vollen co-founded Voice of Witness, a series of books using oral history to illuminate human rights crises around the world.