Sustainability At Duke: leave your mark not your footprint

The concept of sustainability as we know it today owes it origins to the small hamlets of 14th century Germany, where villagers relied on extracting a sustainable yield from collectively-owned forests. History is punctuated with examples of cultures that have flourished or died off due to the economic, social and environmental sustainability of their daily behavior and decisions. This exhibit explores these issues and illustrates how members of the Duke community can create a more sustainable world.

“I Take Up My Pen”: British Women Writers in the Nineteenth Century 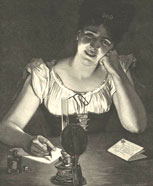 Nineteenth century Britain—a world of progress and reform, discovery and innovation, industrialization and social upheaval—was also the era of the professional woman writer. Nineteenth century women, desiring to contribute to cultural discourse, to voice their opinions, and to tell their own stories, demanded a place beside men in the world of letters.

This exhibit focuses on women’s writing as both a means of self-definition and a powerful tool for social change and highlights the tension between women’s domestic lives and their public contributions to nineteenth century discourse. 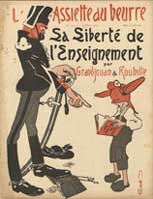 Duke’s outstanding collection of satirical magazines offers a panoramic view of international journalistic caricature from its origins in the 1830s to the present day. This show surveys the spectrum of comic journalism, examining the visual languages of graphic satire and investigating its rhetorical power.

The Perkins exhibit is curated by Neil McWilliam, Walter H. Annenberg Professor in the Department of Art, Art History & Visual Studies with the assistance of some of his students and coincides with an exhibition of contemporary and historical graphic satire at Duke’s Nasher Museum.

The Nasher exhibition, developed by Duke and UNC undergraduate seniors and graduate students, will feature works from the founding of journalistic caricature—the campaign mounted by Daumier and his contemporaries against French monarch Louis-Philippe (1830–1848)—and compare them to cartoons of the Clinton and Bush presidencies. The Duke students working on the exhibit are enrolled in McWilliam’s visual studies course, “From Caricature to Comic Strip.”

The Bathers: Photographs by Jennette Williams

Platinum prints of women in the ancient communal bathhouses of Budapest and Istanbul by Jennette Williams, a fine arts photography instructor at the School of Visual Arts in New York City. Williams has been selected to receive the fourth Center for Documentary Studies/Honickman First Book Prize in Photography for these photographs. She will discuss her work at the exhibit opening at 5:30pm on 12 November in the Biddle Rare Book Room at Perkins Library. The exhibit is co-sponsored by the Duke University Libraries and the Center for Documentary Studies at Duke University.

Chatterley’s black and white photographs trace the life and career of blues musician Honeyboy Edwards, beginning at his birthplace in Shaw, Mississippi, continuing through the Mississippi Delta to New Orleans and then north to Chicago. Traveling by himself and with Honeyboy, Chatterley drove thousands of miles documenting the important places in Honeyboy’s life and career while also photographing the musician at night clubs, blues festivals, concerts, recording sessions and, private family celebrations.

What is Jazz? Selections from the Jazz Archive at the Special Collections Library

Photographs, posters, analytic prose, music manuscripts, and recorded audio, along with playing cards, album covers, and literary fiction are examples of materials the Archive collects in order to document jazz’s social and cultural history. By exploring some of the artifacts of jazz’s past, this exhibit provides one response to the question, “What is jazz?”

An exhibit of materials from the Rare Book, Manuscript, and Special Collections Library that draws from the life and career of John Hope Franklin to explore slavery, the Jim Crow era, civil rights, and African American intellectuals in the 20th century. The exhibit will launch a year-long celebration of the 15th anniversary of the Special Collections Library’s John Hope Franklin Research Center for African and African American History and Culture.