This comment from a suggestion box in the men’s dining hall on West Campus captures student sentiment about the state of campus cuisine when Theodore W. “Ted” Minah arrived in January 1946 as the newly appointed manager of the Duke University dining rooms. The student discontent was in reaction to an outdated compulsory meal ticket system, wartime food rationing, and a decline in the quality of the dining services that was due to poor food preparation and an untrained staff. 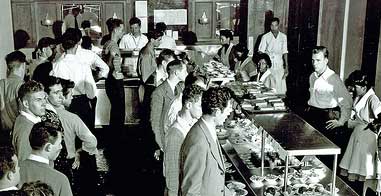 Minah faced logistical challenges as well, such as feeding the influx of returning veterans, who increased the number of students on campus to 5,000. Long lines in the dining halls and insufficient seating only added to the student discontent. Under these circumstances, it would have been understandable if Ted Minah had turned down Duke’s offer. But as the materials in the Theodore W. “Ted” Minah Records and Papers in the University Archives reveal, Minah was no ordinary man. During his twenty-eight years at Duke, he transformed the dining halls into an award-winning, highly rated operation that served millions of meals to generations of Duke students. 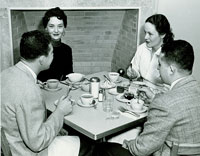 Early in Minah’s tenure he resolved to make the dining halls more than just a place to grab a quick meal. His objectives and operational philosophy for the dining halls were to provide a social atmosphere where students could mingle and have a healthy meal. More importantly, Minah believed that good dining was part of the students’ overall education. Dining halls including the Great Hall and the Oak Room were designed, and in some cases, renovated, to encourage students from different racial and socioeconomic backgrounds to engage with each other and with faculty and guests. The Men’s Graduate Center (now Trent Hall) was a shining example of this model. Constructed in 1953, the new dining hall featured a cafeteria, private dining rooms where those students with “allied interests” could eat together, and a coffee lounge where graduate students, faculty, and friends could gather informally. In 1961, the Graduate Center was opened to freshman and sophomore nursing students, with the hope that dining there would contribute to their “social education.” 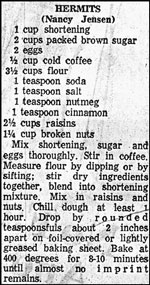 Minah also believed that “adventurous and stimulating eating habits” contributed to a student’s education. His office is said to have been filled with cookbooks and magazines, and the assorted recipes preserved in his records and papers suggest that he frequently experimented to meet changing student tastes. While some of Minah’s culinary offerings were popular with all Duke students (including the famous Duke Toll House cookies and hermit cookies, which some alumni still reminisce about!), others like the congealed apple and cottage cheese salad were reserved for the more “daring” appetite. Minah’s success in providing food that was healthful, nutritious, and palatable earned him the Silver Plate Award as Outstanding Food Services Operator in the Colleges and Universities Division in 1968.

Employing students in the dining halls was another Minah innovation. In a 1974 interview he claimed to be the first university dining director in the country to develop a program for student employees. The idea for the program probably derived from his own experience: Minah learned the food business from the bottom up—starting on the dish machine, washing pots, and then working his way up to the status of journeyman cook while still in college. In the program Minah established at Duke, interested students were recruited, trained, and given opportunities to become dishwashers and cooks, cashiers and waiters, with the promise of gaining valuable work experience while still having ample time for an academic and social schedule.

Incentives spurred the workers to move up into better and higher paying positions. Countless letters from students seeking employment in the dining halls speak to the program’s success. One, dating from 1966 reads, “my sister … spoke to you concerning my working in the dining hall next fall, and I was glad to hear that a place is available … I appreciate your giving me the opportunity to work at Duke and am looking forward to it.” 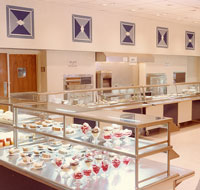 Minah’s rapport with students never faltered, even in difficult situations. During his career he weathered three boycotts—grapes, lettuce, and meat—and the 1968 dining hall strike for “decent living wages.” While the episodes were marked by controversy and strongly held views, Minah always tried to reach common ground with students, not only to meet their demands, but to keep the dining halls open. During the dining hall strike, he recalled that “there were some 250 students who volunteered to work—they simply didn’t want this crowd (union supporters) to take over the university.” 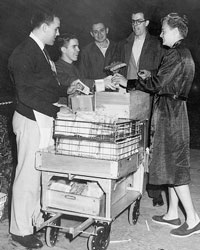 Recognizing that students were a vital part of the dining halls’ success, Minah was always open to their suggestions and ideas. The “chowman” was one such initiative. Students proposed the service to counter the night-time bootlegging of food in dorms that had culminated in unsanitary conditions in rooms, food poisoning, and complaints about students knocking on door at all hours of the night trying to sell food. Introduced in 1950 and run by the M.S.G.A. (Men’s Student Government Association) Catering Service, the student chowman vendors peddled sandwiches, milk, ice cream and other snack foods from 10:30 to midnight to hungry West Campus students. Student vendors earned a commission—up to 20% of the sales, which was about $500 per student per semester. Eventually replaced by “robot rooms” (vending machines) in 1961, the chowman left a legacy of feeding Duke students for nearly eleven years.

As important as students were to the success of the dining halls, they were just one side of the equation; the dining hall employees were the other half. When Minah arrived at Duke, more than 90% of the food services employees were African American, and, as he said, “there was no one in the vicinity that had had restaurant experience…” Demonstrating a commitment to equal opportunity that was rare for the time, Minah set out to “provide an atmosphere in which all those employees who are in our employ will have the opportunity and desire to improve their skills and by their increased productivity attain higher goals of status and remuneration.” Minah backed up his words with action.

In 1947, he initiated an on-the-job training program, taking advantage of the U.S. government’s offer to fund education for returning veterans of World War II under the G.I. Bill. In the program’s first year, six veterans were enrolled in training for institutional or restaurant management, with fourteen others learning to be professional cooks and bakers. Over the course of several years, Minah expanded on-the-job training, enabling cooks and supervisors to attend schools including the Culinary Arts School and the Cornell Hotel School. He also instituted promotion policies and worked to ensure that pay and benefits were competitive. By 1967, nearly half of the supervisors and clerical staff (including cashiers) were African American, and for many years there was less than a 5% turnover rate in Minah’s department. 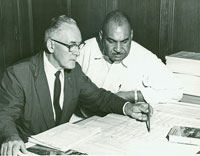 Minah’s commitment to his employees is well-documented. His records and papers are replete with thank-you letters from employees grateful for Minah’s interest in their well-being; service bulletins and newspaper advertisements promoting dining hall employees who were available for summer jobs in North Carolina and out-of-state resorts (an arrangement that enabled them to combine vacation with extra income); and letters of recommendations, including Minah’s letter praising William “Big Bill” Jones. Minah had known Jones since 1937 and, when he came to Duke in 1946, Minah thought Jones would be ideal as the banquet manager for the dining halls. The two worked together at Duke for nearly thirty years, and in 1970 Minah wrote of Jones:

I shall always consider it a great privilege to have been associated with him for the past 33 years since we began working together in the Brown University Dining Halls back in 1937. He has taught me a great deal not only about the operation of a dining hall service but how better to understand my fellow man.

Managing employees and the operations of the dining halls were only part of what Minah did every day. His duties also included buying, warehousing, preparing, and serving food; service and selling; housekeeping; office management and accounting; and renovations, repairs, installations and alterations. In performing his responsibilities, Minah’s goal was to “initiate and engage in continuing experimentation, research and self-development which will raise the standards of [the] profession.” As with his other operational philosophies, Minah’s actions matched his words. During his tenure at Duke, he not only introduced new dining hall concepts (for some of Minah’s innovations, see the sidebar), but also established a reputation for successful high-profile catering events, including Duke presidential inaugurations, receptions for dignitaries such as Vice President Hubert Humphrey, and banquets, including a 1,000-person affair in the Cameron Indoor Stadium honoring Dr. Wilburt C. Davison, the first dean of Duke Medical School.

Ted Minah was a prolific writer, publishing dozens of articles in College and University Business and Institutions Magazine, and he frequently provided counsel and the benefit of his experience to the industry. Minah served as president of the College and University Food Service Directors (1964), vice president of the North Carolina Restaurant Association (1950), and president of the Kiwanis Club of Durham. With each position he had the opportunity to promote healthy eating, employee training, new methods of cooking, and the importance of the food services industry. The National Association of College & University Food Services recognized Minah’s significant contributions to the profession by renaming its highest award the Theodore W. Minah Distinguished Service Award in 1973; Minah had received the award when it was established in 1967. Today, the award is still bestowed on those who have made an outstanding and enduring contribution to the food service industry and to the association.

By his retirement in 1974, Minah had transformed dining services at Duke University from a small, disjointed department to an award-winning operation of twelve dining halls serving approximately 15,000 meals per day. Throughout the nation, Ted Minah was known as the “dean” of college and university food service directors. He died in 1991 at the age of 82.

Minah’s records and papers, which were received by the University Archives soon after his retirement, show a complex man who was kindhearted, creative, and wholly committed to his profession, students, employees and the University. For those who worked with or knew Ted, and for those being introduced to him for the first time, he will be remembered for the indelible mark he made on the foodservice industry and Duke University.

All quotes are from materials in the Theodore W. “Ted” Minah Records and Papers in the University Archives.

During his tenure, Ted Minah introduced many innovations. A few of the more notable include: 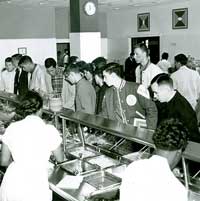 Read More about Dining at Duke

The Inventory of the Theodore W. “Ted” Minah Records and Papers (http://library.duke.edu/digitalcollections/rbmscl/uaminah/inv/) and photograph exhibit “Dining at Duke” at http://www.flickr.com/photos/dukeyearlook/.

Mary Samouelian was the 2007-2008 Isobel Craven Drill Intern in University Archives. In 2008 at the annual meeting of the Society of American Archivists, she received the Theodore Calvin Pease Award, which recognizes superior writing achievements by students of archival administration. Samouelian received the award for her paper, “Embracing Web 2.0: Archives and the Newest Generation of Web Applications,” an investigation of the extent to which Web 2.0 features have been integrated into archival digitization projects.

5 thoughts on “Dining at Duke”