Robert L. Eichelberger (1886-1961), a 1909 West Point graduate, served with distinction in the U.S. Army, rising to the rank of lieutenant general before his retirement in 1948; he later received a fourth star. Throughout his career, during many extended assignments away from home, Eichelberger wrote letters every day—and sometimes as frequently as four times a day—to his wife, Emma, a native of Asheville, NC. Addressing her “Dear Miss Em,” Eichelberger filled the letters with details of his experiences (without divulging military secrets) and anecdotes about colleagues, including Douglas MacArthur, referring to them in a code only Miss Em would understand. And along with the letters he sent photographs.

After Eichelberger died, Emma Eichelberger donated her husband’s personal papers, comprising nearly 30,000 items, to Duke’s Rare Book, Manuscript, and Special Collections Library. While the bulk of the collection dates from the World War II era, a series of unique and almost unknown photographic images of the Russian Civil War in eastern Siberia recall one of the general’s earliest assignments. 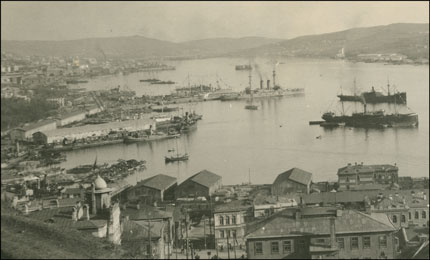 Eichelberger was posted to Siberia in 1918, where he served for two years as assistant chief of staff, Operations Division, and chief intelligence officer with the American Expeditionary Forces (AEF). The AEF went to Russia by order of President Woodrow Wilson on a mission that constituted America’s first attempt to use its armed forces for peacekeeping purposes.

From an office on Svetlanka St., in Vladivostok, Eichelberger oversaw an intelligence network that extended over 5,000 miles into the Ural Mountains. In his official capacity as America’s chief intelligence officer in Siberia, he interviewed (frequently over a bottle of vodka) hundreds of Russians from all walks of life, including “everything from a Baron to a prostitute.”1 The intelligence he gathered, his analysis of it, and the reports he wrote allowed his commanding officer, Lieutenant-General William S. Graves, to set an American course in the face of “competing signals” from both Washington and the Inter-Allied Military Council, a ten-nation coalition of American, British, French, and Japanese officers. The Council debated, formulated, and tried to implement a coherent Allied policy for Siberia and eastern Russia between 1918 and 1920.

Members of the Inter-Allied Council

Materials in the Eichelberger Papers pertaining to his participation in the AEF’s incursion into Siberia are grouped into two series: military papers and pictures. The Military Papers Series includes typed letters, handwritten notes, intelligence summaries, memoranda and reports, and leaflets, as well as maps. An oversize “top secret” map is one of a series made on tracing paper to record the changing locations of military bases and troop strength of American forces in Siberia along the railroad linking Vladivostok and the Nikolsk-Ussuri and Suchan mines.

The U.S. government considered the mines and the railroad necessary for the “economic relief” of the Russian people. These same installations were also deemed critical to the success of the U.S. military’s political mission, namely, supporting “any efforts at self-government or self-defense in which the Russians themselves might be willing to accept assistance.” The question, of course, was which one of the various warring factions in the Russian Civil War constituted the true representatives of the Russian nation.

The Picture Series, comprising over a thousand photographs, complements the written record of Eichelberger’s tour of duty in eastern Siberia and is equally important. Some of the photographs are loose and some have been pasted, probably by Emma Eichelberger, into two photo albums. The albums contain official AEF photos (primarily of foreign troops parading down Svetlanka) as well as scenic views of Siberia’s architectural and natural landscapes, among them Golden Horn Bay.

The many loose photos differ in character from the official pictures and panoramic landscapes preserved in the albums. These are much less romanticized images of everyday life in eastern Siberia: an enormous hog outside a Chinese tailor’s shop; three peasant children; a young Russian soldier almost drowning in his big fur hat and heavy military overcoat.

Eichelberger’s Siberian photos provide unique visual documentation of both American involvement in the Russian Civil War and daily life during war-time in an ethnically and religiously diverse region on the border of three major 20th-century powers: Russia, Japan, and China. And now these images are available on the Web at http://library.duke.edu/digitalcollections/esr to anyone with access to an Internet browser. The Eichelberger photographs and other related photographs have been digitized to form a collection titled “Americans in the Land of Lenin: Documentary Photographs of Early Soviet Russia.” “Americans in the Land of Lenin” was modeled, at least in part, on the University of Michigan’s “Polar Bear Expedition Digital Collections,” which consists of materials related to the American intervention in northern Russia at the end of World War I.

The Duke project encompasses roughly 1,400 images, many with captions and other annotations, and is one of the largest collections of photographs of the Russian Civil War in the United States. The launch of “Americans in the Land of Lenin” marks the completion of the first step in the digitization of Duke University’s extensive collection of 20th-century Russian visual culture.

Erik Zitser is the librarian for Slavic and East European Studies.

Read More about Robert Eichelberger and the U.S. in Siberia

10 thoughts on “Images of the Russian Civil War in Siberia from the Robert L. Eichelberger Collection at Duke University Libraries”