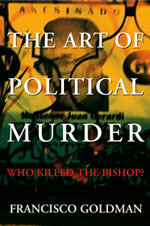 The Art of Political Murder, an exhaustively researched story of assassination, impunity and justice in Guatemala, has won the first annual WOLA-Duke Book Award for Human Rights in Latin America. Francisco Goldman’s book, published by Grove Press, recounts the 1998 killing of Bishop Juan Gerardi, four days after he and a group of lawyers presented a devastating report on human rights abuses committed by the Guatemalan military against civilians. Goldman received the award at a 17 September gala in Washington, D.C. that was attended by some 250 WOLA supporters, including human rights advocates, scholars, Latin American diplomats, and representatives from Duke. Goldman will speak at Duke on 18 November.

WOLA (the Washington Office on Latin America) and Duke University created the prize to honor the best current, non-fiction book published in English on human rights, democracy and social justice in contemporary Latin America. In addition to the Libraries, the Duke Human Rights Center is also a co-sponsor of the award.

The book award is the second cooperative venture between WOLA and Duke University. Under an agreement signed in January 2008, WOLA has donated its historical archives, dating to the organization’s founding in 1974, to the Archive for Human Rights at the Duke University Libraries. The materials in the archives document WOLA’s influential role in keeping human rights and justice central in U.S. policy toward Latin America. In presenting the book award at the gala, University Librarian Deborah Jakubs said, “We are honored that WOLA selected Duke to be the repository for the organization’s archives and entrusted us with their history. This book award is another element of our partnership, and we look forward to further collaboration with WOLA.”