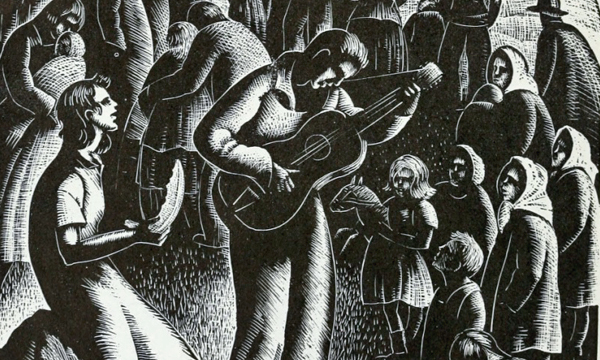 Duke University Libraries has received a $74,595 grant from the Council on Library and Information Resources (CLIR) to digitize a large collection of North Carolina folk music that has never been widely heard.

The collection includes some 1,367 songs recorded in the 1920s and 1930s on wax cylinders and aluminum discs. The recordings were made in the field by folklorist, professor of English, and Duke University administrator Frank Clyde Brown (1870-1943), who traveled across North Carolina collecting folk songs, sayings, stories, and other folklore between 1912 and his death in 1943. Brown collected songs from at least 52 of North Carolina’s 100 counties, representing all regions of the state.

“The recordings include music unique to North Carolina, as well as popular American folk songs, traditional British ballads, and a range of other tunes,” said Winston Atkins, Preservation Officer for Duke University Libraries and the principal investigator for the project. “Taken together, they represent an important and untapped primary source of American folk music in the early twentieth century.”

The songs have never been widely accessible due to the age and fragility of the recording technology Brown used, as well as the difficulty of transferring them to more modern media formats.

“Until recently, there has been no non-destructive way to recover audio on historical wax cylinders and aluminum discs, which require a mechanical stylus and can be damaged if played today,” said Craig Breaden, Audiovisual Archivist in Duke’s David M. Rubenstein Rare Book & Manuscript Library.

The Duke recordings will be digitized using a new non-contact technology, known as IRENE, at the Northeast Document Conservation Center in Andover, Massachusetts. IRENE takes ultra-high resolution visual scans of the grooves imprinted on the cylinders and discs and mathematically translates those into digital sound files that are remarkably faithful to the original recordings. Because there is no actual contact with the recording, IRENE’s scans can also capture sounds from damaged media.

The method has been used successfully to digitize other historical audio collections, including some of the earliest examples of recorded sound made by Thomas Edison.

Digitization will begin in the summer of 2016 and take approximately one year. The recordings will then be described and processed, and the collection will be made freely and publicly available through the Duke University Libraries website in 2018.

Born in 1870, Frank Clyde Brown began his career as a professor of English at Trinity College in Durham (the forerunner of Duke University) in 1909 and later became chairman of the department. Between 1924 and 1930, as Trinity expanded into Duke University, Brown served as the institution’s first comptroller, overseeing the construction of West Campus and the renovation of East Campus. He also served as university marshal, entertaining distinguished visitors to the new university.

In 1913, at the urging of legendary folklorist and musicologist John A. Lomax, Brown founded the North Carolina Folklore Society and was elected its first president. He later served as its secretary-treasurer, program chairman, and primary collector until his death in 1943. His efforts to record the sounds and nuances of North Carolina’s “folk” were part of a national trend in the early twentieth century to preserve American folk culture, aided by new technologies that allowed folklorists to make recordings in the field. The 1,367 songs captured by Brown are a significant part of that legacy.

The seven-volume Frank C. Brown Collection of North Carolina Folklore, published posthumously by Duke University Press between 1952 and 1964, represents Brown’s lifetime of collecting. It is widely regarded as one of the premiere collections of American folklore ever published and is available online. Four of the seven volumes are dedicated to the music Brown recorded and include transcribed melodies and song lyrics. However, the editors of Brown’s work left out an estimated 400 songs he recorded. These “bonus tracks,” which are found on the wax cylinders and aluminum discs but not in the published collection, will be digitized as part of the project.

Brown’s original manuscripts and notes, which were used to compile the collection, along with his original recordings, are housed in Duke’s Rubenstein Library.

In 2015, two Duke faculty members—Victoria Szabo and Trudi Abel—incorporated some of the Frank C. Brown recordings into NC Jukebox, an interdisciplinary Bass Connections course introducing undergraduate and graduate students to digital history. Students conducted original research on the history of the recordings and tracked down the descendants of some of the singers and musicians. The course will be offered again in Spring 2017.

The grant to digitize Brown’s recordings is part of CLIR’s Digitizing Hidden Special Collections and Archives awards program, a national competition that funds the digitization of rare and unique content held by libraries and cultural memory institutions that would otherwise be unavailable to the public.