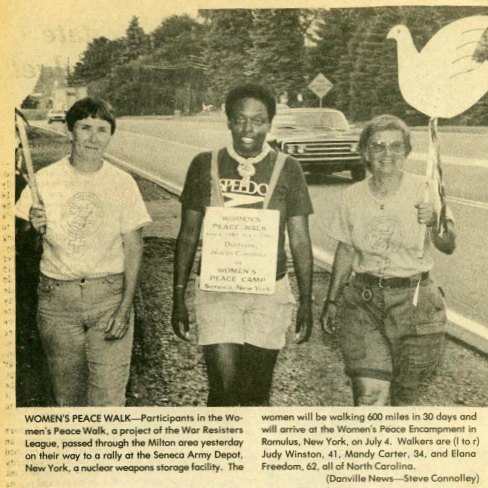 This year Carter celebrates 45 years of social, racial, and lesbigaytrans justice organizing, and it’s almost impossible to summarize all that she has done—beginning with peace activism in the late 1960s and continuing today in her role as National Coordinator for the Bayard Rustin Commemoration Project of the National Black Justice Coalition. So instead, here’s one small peek.

Though based in Durham for much of her career, Carter has traveled up, down, and around the country in support of her activism–and in the summer of 1983, she walked from Durham, North Carolina to Seneca, New York as part of the Women’s Peace Walk.

Organized by the Southeast Regional Office of the War Resisters League—where Carter worked at the time—the Women’s Peace Walk aimed to draw attention to and protest the build-up of nuclear arms and specifically, the planned deployment of Cruise and Pershing II missiles to Europe later that year.

Organizers timed the end of the walk to coincide with the beginning of the Women’s Encampment for a Future of Peace and Justice, and the destination itself held particular significance. The area was not only home to the Seneca Army Depot, a nuclear bomb and missile storage site, it was also where women of the Iroquois Nation met in 1590 to demand an end to war among the tribes and where more than 300 men and women came together in 1848 for the nation’s first women’s rights convention.

If you’re interested in learning more about Mandy Carter, her lifelong activism, and social change in Durham over the past 30 years, head down to the Durham County Library at 5:30pm on Wednesday for a panel discussion featuring Carter, Caitlin Breedlove (Co-Director, Southerners On New Ground) and Steve Schewel (Founder, Independent Weekly). Event details are available here.

Calling All Campers!
Exhibit Opening: "Our History, Our Voice: Latinx at Duke/Nuestra Historia, Nuestra Voz: Latinas/os/e...
Bus Boycotts and the Politics of Race