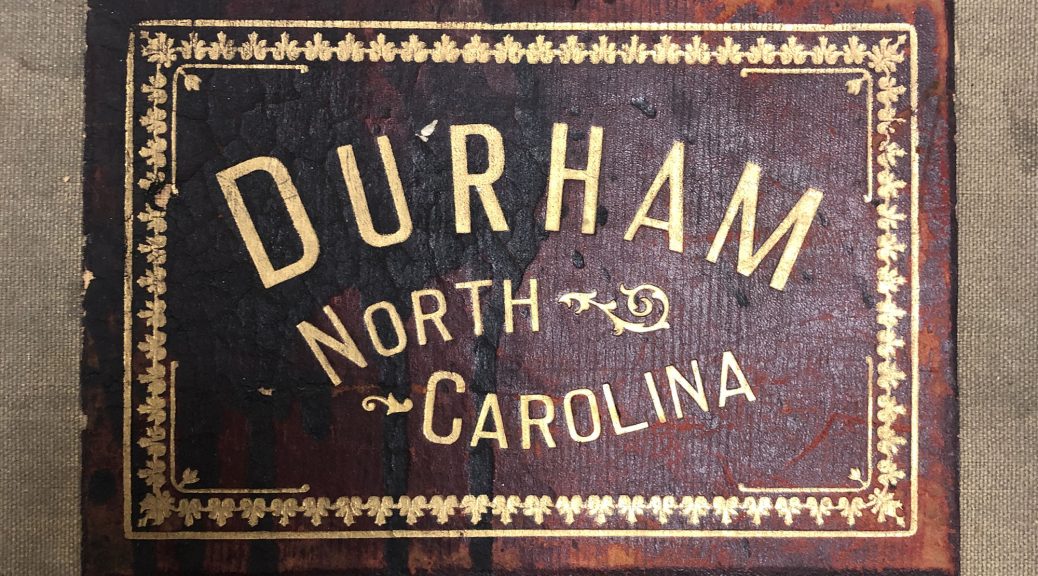 Another very exciting and very large book arrived in the lab this week: a volume of the Sanborn fire insurance maps for the city of Durham. The Sanborn maps were used as a reference by insurance underwriters to assess risk and determine how much insurance to offer without having to physically travel to the location. Originally published in 1913, the contents of this book were continually updated until 1931 to accurately reflect changes in buildings throughout the city. Rather than reprint the maps annually with updates, corrections were just pasted in. You can see the evidence of these corrections everywhere. For example, the endsheets are covered in additional indexes: Looking closely, you can see printed instructions to the corrector for which indexes to paste over with the update. Small cutouts of updated maps are also pasted, layer after layer, throughout the interior. The binding is reflective of common ledger bindings from the late 19th and early 20th century, which feature a number of structural components designed to allow such a large and heavy book to function. These include both leather and heavy cloth spine linings, a shaped rigid spine piece, and cloth reinforced hinges.

Despite the added strength from those materials, they have not been able to withstand the stresses that this book places on them when opening – particularly as they have aged and weakened. Large portions of leather and the “hubs” (raised bands) are missing from the spine. The leather joints have completely split and the spine piece is just hanging on by a thread now. Fortunately the sewing and spine linings remain intact and functional.

Luckily, most of the stamped leather tabs remain. While examining the book, I was keeping an eye out for some of Durham’s more notable landmarks.  The Erwin Cotton Mill, located at the corner of 9th and Main street, was easy to spot. I also found the oldest operating business on 9th street, the White Star Laundry. That corner looks a little different these days. The building in yellow was demolished in the 1950s. I even found the infamous “Canopener” bridge on Gregson St! The Sanborn maps contain a wealth of information about the cities they describe and are an important resource for scholarship. We will be working with the curators at the Rubenstein Library to determine the best treatment plan for stabilizing and housing this volume so that it can be safely accessed by patrons.

If you are interested in learning more about the history of your city from Sanborn maps, you might be able to find digital images of the maps through the Library of Congress.

Quick Pic: What a Difference a [Press] Makes
Your Friday Sound Bite
The Road to the Conservation Lab...

One thought on “Maps of Durham”