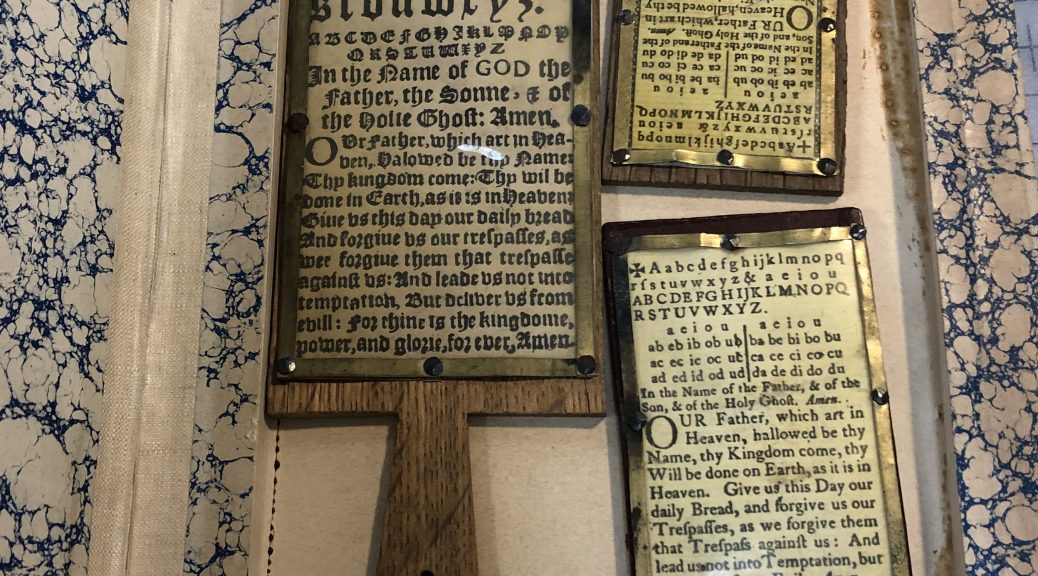 Long used as a primer in children’s education, the hornbook originated in England in the 15th century. The books commonly take the form of a wooden paddle inscribed with the alphabet or a piece of text, which is protected with a transparent sheet of horn. The materials of construction can vary, with the paddle made of wood, bone, leather, or stone. The text can be printed or in manuscript, on parchment or on paper. The protective transparent sheet might also be made from mica. The hornbook is referenced in literature as early as Shakespeare’s Love’s Labour’s Lost  and is a format that was often used in both English and the American education until the late 18th century.

We learned all this and more when a special edition of Andrew Tuer’s History of the Horn-Book came through the lab recently for boxing. The publisher’s use of the hornbook’s iconic shape in the decoration on the front cover and the spine label is quite appropriate. But while this parchment case binding looks fairly ordinary, it contains quite a surprise. The front section of the book has been glued into a solid block, which is quite heavy. The blocked section features a textile flap along the tail edge of the front flyleaf. Don’t you wish every history book you picked up included little artifacts hidden inside a secret compartment? Thanks to Rachel Penniman for snapping some photos of this amazing object before it returned to the stacks in its new enclosure.

Quick Pic: Bat!
Blast From the Past
What's In The Lab: A Farewell to a Beloved Colleague