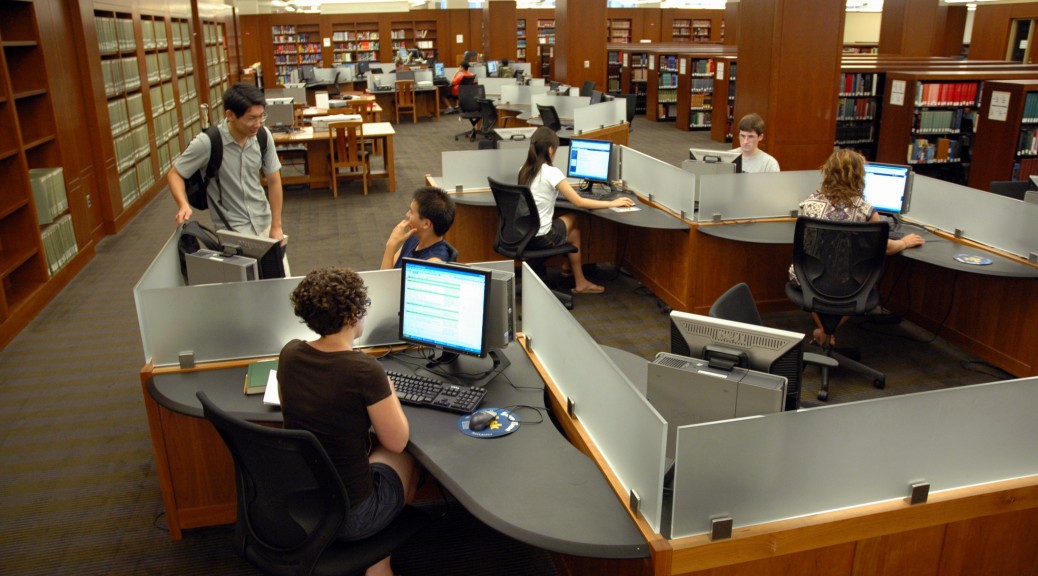 The Duke University Libraries are a bustling hub of activity—everywhere students are chatting over cups of coffee, tucked away in study carrels, and diving into the depths of the stacks. But in addition to the crowds of diligent Dukies chipping away at their work, there is a second, less obvious body of regulars who are always here—student employees.

The Libraries are one of the largest employers of students on campus, with more than 250 undergraduates and graduate students employed in various positions during the academic year. Students are an indispensable part of our workforce, and without them we could not be one of the top research libraries in the nation. So in recognition of their important contributions to our success, we would like to introduce you to just a few of our brilliant library student workers. 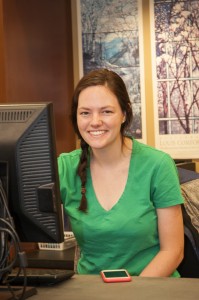 The students who staff the circulation desk at Perkins Library have become familiar and welcome faces to the patrons they serve. Kristin Brunn, along with her co-workers in Circulation, represents the public face of the Libraries. Kristin, who has worked for the library for three years, says her duties include checking out materials, handling closed reserve books, managing the nearby e-print stations, and answering patrons’ questions.

Kristin’s job has pushed her to become comfortable chatting with new people and interacting with the never-ending stream of library patrons. Plus, her work experience at the library has helped her get a second job working with Duke Reunions. 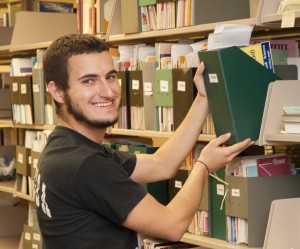 While many students work at the circulation desk, far more are at work behind the scenes. Chris Moldes, a graduate student in the Slavic and Eurasian Studies department, started working here last year after he received a notice about an opening in the Libraries’ International and Area Studies Department. The library had recently received fifty boxes of new materials, all in Russian, and needed someone to help process them. Chris was the perfect candidate—he was looking for an opportunity to improve his Russian translation skills in a practical way, and soon he was up to his elbows in Russian materials.

The majority of the donated documents were Russian grammar books, many of them from Soviet times. Chris was fascinated by the cultural and historical perspectives the materials presented. He recalls flipping through alphabet books for children, which featured Stalin prominently throughout. Looking at books from just a few years later, Stalin was conspicuously absent. Among the materials there was a volume from The Great Soviet Encyclopedia, a comprehensive encyclopedia created by the Soviet Union from 1926 to 1990. The historical disparities between the American and Soviet perspectives made it one of Chris’s favorite finds. 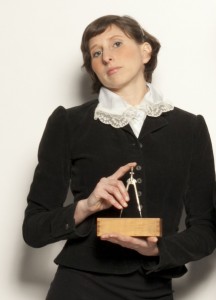 A world away from boxes of Russian grammars, Beatriz Wallace sits beside a student in the Murthy Digital Studio, part of the renovated space in The Edge: The Ruppert Commons for Research, Technology, and Collaboration. Beatriz, a Digital Humanities Graduate Assistant, is helping the student find the best digital format to accommodate and promote her work.

Much of Beatriz’s work involves creatively merging the humanities with science and technology. She is currently part of a four-person team developing a new online resource titled Project Vox. The project addresses the fact that few female students choose to pursue majors in philosophy. This is, in part, because students receive limited exposure to the work of female philosophers. Project Vox is a digital resource specifically devoted to showcasing the work of women philosophers and making their writings easily accessible (projectvox.library.duke.edu).

Beatriz has also used library resources extensively in her own creative work as an MFA at Duke. While working on a project about illness and illustration, she was struck by the artificiality and coldness of medical diagrams and images. Combing through resources from the Duke Medical Center Archives and the Rubenstein Rare Book & Manuscript Library, she looked for medical images from before the digital era. These sketches and drawings had been crafted by human hands and had a warmth and presence about them that was completely different from their modern-day counterparts. She went on to digitally alter and combine many of the images as part of an art installation, Anatomy in Four Parts. In combination with other material investigations of medical imagery, such as preserved animal organs, her installation highlighted the ways we interact and imagine illness as both an art and science. 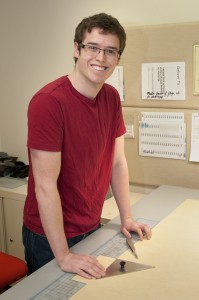 The digital humanities may be focused on the future, but across the library another department is working to make sure we don’t let the past slip away. Aaron Webb is a senior working in the Verne and Tanya Roberts Conservation Lab, where the most delicate and fragile of the Libraries’ materials are repaired and protected. Currently, Aaron is working on re-encapsulating some historical maps from the Libraries’ collections. This involves sealing the individual maps between two pieces of Mylar, allowing them to be handled and used without wear-and-tear to the paper.

Aaron is majoring in physics, and surprisingly he has managed to pick up some transferable skills during his time working in the library. The most difficult part about working in the Conservation Lab is the precision that it requires, but Aaron uses that same care while doing delicate electronics work. It turns out that wielding a bone folder or conservation scalpel is not so different from handling a soldering iron in a physics lab! 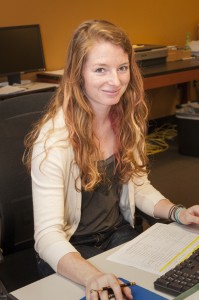 Anna Maudlin Speth’s academic interests and her job at the David M. Rubenstein Rare Book & Manuscript Library are a near-perfect match. Anna Maudlin has always had a love for old things, but it was not until her freshman year at Duke that she became interested in majoring in history. Wondering what sort of careers could result from such a major, she met with her Writing 101 professor. One possible career path her professor suggested was to become a librarian. Anna Mauldin was intrigued, and by her sophomore year she was employed as a reproductions assistant in the Rubenstein Library.

Working in the Rubenstein, Anna Mauldin makes copies of materials requested by researchers who cannot visit the reading room themselves. She also staffs the research services desk, helping patrons access the materials they have requested.
Anna Maudlin’s job exposes her to a wide range of historical materials. Among her favorites is a set of journals from pioneers who moved west across the country. She finds them particularly fascinating because, having made the cross-country journey themselves, the journals are also pioneers.

Inspired in part by her work in the Rubenstein Library, Anna Maudlin recently applied and was accepted to library school where she plans to focus on archival work.

These are merely a handful of the stories and faces behind the students who keep the Libraries working. The next time you check out a book, pore over rare manuscripts in the Rubenstein, or peruse a Soviet encyclopedia, be sure to thank a student worker.

Gwen Hawkes (T’16) is an English major and a library student worker herself. For the last two years, she has worked in the Library Communications department.