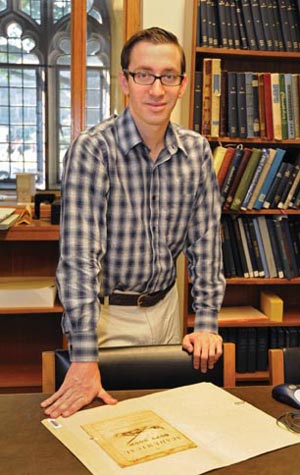 On the evening of June 30, 1868, a “very tired” farm mistress sat down to record the day’s accomplishments in her diary. She had spent a busy day baking, cutting patches for her husband’s pants, and walking with her house servant. Each night, no matter how much her day contained, the unnamed woman found the energy to record a short summary of the day’s events. This remarkable diary is just one of the many treasures in Duke’s Rare Book, Manuscript, and Special Collections Library.

As part of my Master’s thesis at the University of North Carolina at Chapel Hill, I have been researching North Carolina’s Forsyth County during the Civil War and Reconstruction, frequently drawing on collections at UNC and Duke. As I neared the end of a morning in the RBMSCL reading room, I decided to take a quick look at an anonymous “North Carolina farm woman’s diary, 1868” listed in the online catalog. Opening the thin composition notebook, its pages yellow and worn, I was immediately struck by how familiar-sounding some of the names in it seemed. Even more striking, I felt I had seen this author’s handwriting before. I decided to spend ten minutes trying to identify the author.

In the diary, the author’s family members are always referred to by first name only. No surname is ever given. Who were Abe, Julia, Gina, Erastus, Paulina, and “the Dr.?” I performed a quick search of the 1860 and 1870 census records—which have been digitized and are available online. Searching by first names it quickly became apparent that the only family in Bethania that fit the description was the Jones family. The fact that the author mentioned several other prominent local families, but not the Joneses, confirmed my suspicions that the diary likely belonged to a member of the Jones family. But which one remained a mystery. The author was clearly a woman, but with numerous women residing in the Jones’ family household in Forsyth County, North Carolina, it was not immediately clear which woman she was.

Returning to the Southern Historical Collection in Wilson Library at my home institution of UNC, I requested the Jones Family Collection and examined the diaries of Julia Jones (1824-1913). The similarities in handwriting, style, and diction were uncanny. She referred to family members in identical ways, even referring to her husband as “the Dr.” Additionally, though the collection at UNC contained Julia’s diaries for the years 1867, 1869, and 1870, the volume for 1868 was missing. Somehow, it appears that the missing volume ended up at Duke. I was satisfied that the anonymous “North Carolina farm woman’s diary, 1868” was ready for a name change. Over 140 years after it was written, the author’s identity had been rediscovered.

But who was this Julia Jones? Born Julia Conrad, she was the daughter of Abraham Conrad, a wealthy planter and early Bethania settler. When she married Dr. Beverly Jones, Julia brought a large farm, a mill, and substantial wealth into the marriage. Dr. Jones was a leading citizen and one of the few doctors in their neighborhood. Their impressive house can still be seen in Forsyth County just north of Bethania (not open to the public). A slave-owner before the war, Dr. Jones avoided military service himself, though at least one son served in the Confederate Army and another guarded Union prisoners in the final days of the war. Although their mill was burned and their slaves were freed, the family weathered the war relatively well compared to some neighbors. The family remained economically stable thanks to both the farm and Dr. Jones’s medical practice. In fact, in 1868, the family was still employing some of their former slaves.

What was once a disconnected Reconstruction-era document can now be used—along with the Jones Family papers in the Southern History Collection at UNC—to compare the day-to-day activities (and workload) of a wealthy southern woman before, during, and after the Civil War. This is just one example of how digitization allows historians to use manuscripts in new ways. With text-searchable census records and newspapers, it is far easier now than it has ever been to contextualize manuscripts. Identifying authors takes a fraction of the time it took historians and archivists before the digital age. The Internet has truly changed the way we do research. The archives are full of such anonymous documents, and Duke has a number of them. My hope is that other historians will continue to fill in the missing pieces and rediscover the provenance of these and other important manuscripts.

Adam H. Domby is a second-year graduate student in history at the University of North Carolina at Chapel Hill.

3 thoughts on “Keeping up with the Joneses”