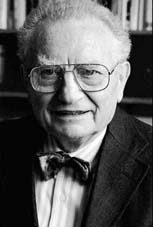 Courtesy of Massachusetts Institute of Technology

The papers of preeminent American economist Paul A. Samuelson (1914-2009), the first American recipient of the Nobel Memorial Prize in economics, are being added to the Economists’ Papers Project in the Rare Book, Manuscript, and Special Collections Library. Prior to Samuelson’s death on 13 December 2009, he had made the decision to donate his papers to Duke where they will join the collections of his MIT Nobel Prize-winning colleagues Robert Solow and Franco Modigliani, as well as those of Nobelists Kenneth Arrow, Lawrence Klein (Samuelson’s first Ph.D. student), Douglass North, Vernon Smith, and Leonid Hurwicz. The Economists’ Papers Project, developed jointly by Duke’s History of Economics group and the Special Collections Library, is the most significant archival collection of economists’ papers in the world.

Samuelson was the singular force leading to the post-World War II reconceptualization of economics as a scientific discipline. His textbook, Principles of Economics, grounded the vocabulary and teaching practices of the economics profession in the second half of the twentieth century, and his career at MIT made that economics department the world leader in scientific economics.