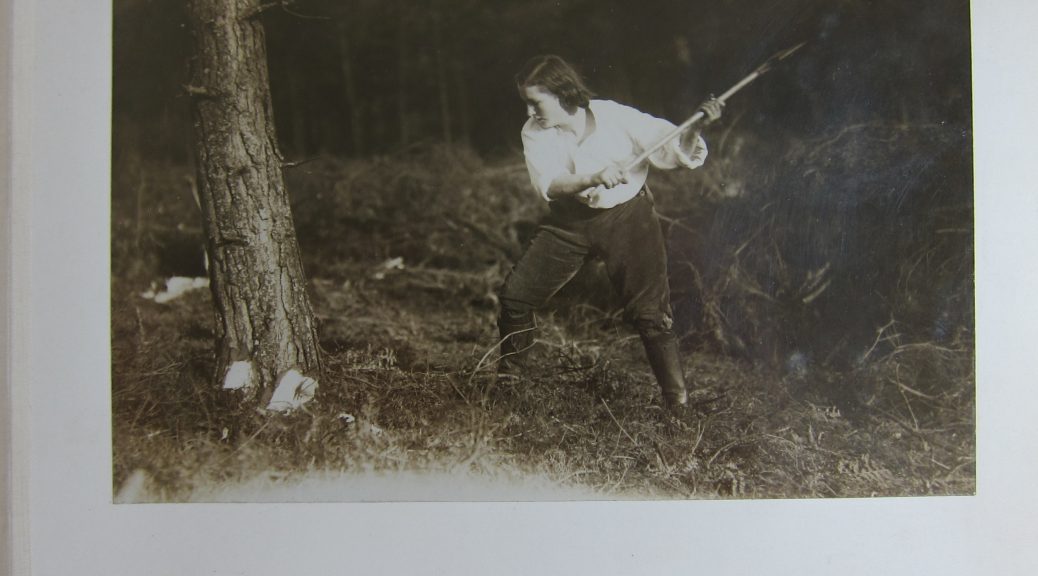 Today’s blog post features a photograph album of 20 gelatin silver prints that depict women loggers at work in England during World War I. This item is from the  Lisa Unger Baskin Collection which documents women’s work across the centuries, from the 13th to the 20th. We chose to highlight this photograph album because it unites two of the Rubenstein’s collecting areas, women’s history and documentary photography.

Although the title, Glimpses of Women’s Work in the Woods, verges on the whimsical, these photographs show young women hard at work doing the grueling manual labor that, until the Great War, had been done almost exclusively by men.

The women depicted in the photographs were members of the Timber Corps. During World War I, forestry, like many male-dominated industries, was left critically under-staffed and the British government encouraged women to do their part for the war effort by taking on these vital jobs. The images show women loggers felling trees with hand-axes and saws, trimming and “barking” felled trees, carrying logs, and driving horses. These photographs were taken in the summer of 1918 around the towns of Petworth and Heathfield in Sussex, England.

These images were captured by Horace Nicholls, a British documentary photographer and photojournalist. He had been a war correspondent during the Second Boer War and later returned to England to work as a photojournalist. Prevented from serving in World War I due to his age, in 1917 he became an official photographer for the Ministry of Information and the Imperial War Museum, documenting life on the home front.

The series was not issued commercially and the album in the Baskin Collection appears to be a unique production. The 20 gelatin silver prints are carefully mounted on cream card stock with gilt edges. The binding is full red leather with the title in gold on the front cover and spine. Each print has a hand lettered caption. Click this link to view the full catalog record.