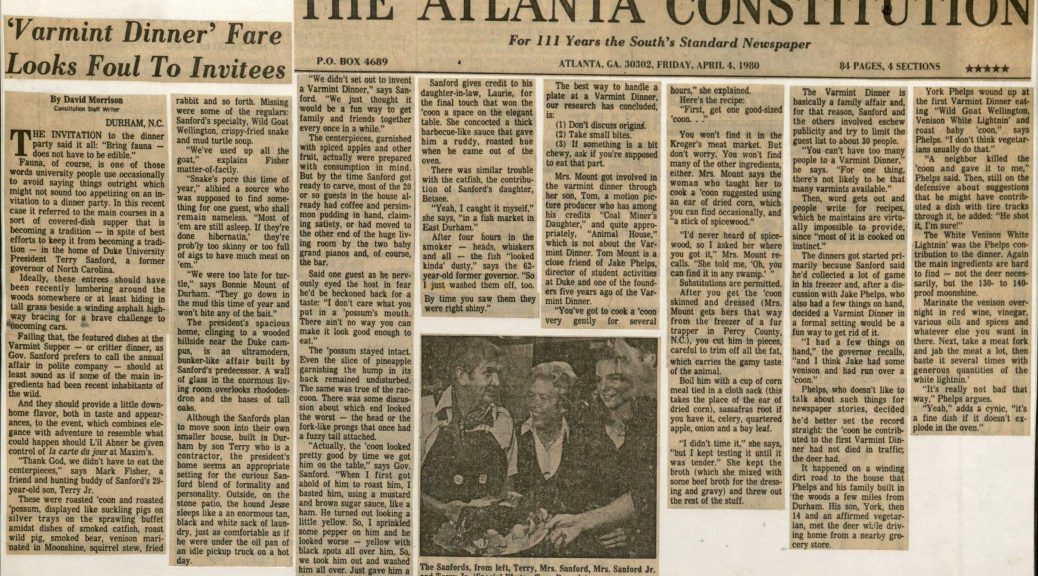 Terry Sanford was a fixture of North Carolina life and politics for decades, and from 1970 to 1985 he was “Uncle Terry,” the President of Duke University. As a North Carolina State Senator, Governor, and United States Senator, he was known for his tireless support of and advocacy for education, especially public education, as well as his support of civil rights causes, including desegregation. He has left a lasting legacy here at Duke (the Sanford School of Public Policy is named for him), in North Carolina, and across the South.

While he may be well-known at Duke and across the country for his progressive ideals, he is slightly less well-known for a particularly fascinating tradition known as the Varmint Dinner. We’re here today to rectify this oversight and share with you all the story of this peculiar party.

According to an article in the Atlanta Constitution in 1980, the Varmint Dinner, also sometimes called the Critter Dinner, started in the mid-1970s when then-President Sanford and a friend, Jake Phelps, had “a lot of game” and thought “a Varmint Dinner in a formal setting would be a fun way to get rid of it.” The dinner continued because it was a way “to get family and friends together every once in a while.” Hard to argue with that!

So what was served at the Varmint Dinner? Over the years, courses included raccoon (universally shortened to “ ’coon”), venison, catfish, wild pig, squirrel, rabbit, goat, bear, turtle, possum, and snake. The theme demanded the idea that “these entrees should have been recently lumbering around the words somewhere or at least hiding in tall grass beside a winding asphalt highway bracing for a brave challenge to oncoming cars.” Highly romantic description that allowed for basically anything not raised on a farm for the sole purpose of being eaten. In keeping with the down-home feel, the dinner was limited to mostly family and some friends, and the recipes based on instinct, rumor, and trial and error. With help from, according to the article, copious amounts of moonshine.

The article appearing in the Atlanta Constitution does an excellent job of trying to convey the sense of Southern country ingenuity combined with refined charm and grace that the whole idea of this dinner given by Terry Sanford evokes. The Terry Sanford Records and Papers, the collection of materials from President Sanford held in the University Archives, also includes some humorous correspondence that details the attendance of the article’s author at the Varmint Dinner in 1980.

Included in the collection is a note written to President Sanford by Bill Green, a journalist and the then-Director of University Relations, conveying the wish of David Morrison of the Atlanta Constitution to attend that year’s dinner, if there was to be one, and offering to bring snake. President Sanford jotted a reply on the letter that reads: “We’ll have one if we can gather in enough varmints. Seems we have been eating them as fast as they come by –“. Later correspondence shows that David Morrison, in attempting to deliver his promise of snake, contacted Georgia State Senator Franklin Sutton, apparently a known source of “rattlesnake steak,” who wrote a lengthy and detailed account of how he might trap a snake and why he was unable to procure one. The letter was a fun reminder to me that politicians and executives rarely typed their own correspondence, since it also includes a sharply hilarious postscript from Senator Sutton’s secretary Benita to David Morrison. We don’t know exactly how long the Varmint Dinner tradition carried on, since this correspondence and the photocopied article from the Atlanta Constitution, as well as half of a photocopied article from an unknown paper, are the only mentions of it in the collection (that I know of, please note this collection has more than 300 feet of material). But if you are looking for a new holiday tradition, and you can lay your hands on some (legally and ethically acquired) varmints, consider what Uncle Terry would do.

These materials came to light during recent reprocessing of portions of Terry Sanford’s collections related to his campaigns for President of the United States in 1972 and 1976. There is a wealth of interesting material in this collection – check it out for yourself!

Correction: After this was posted, a helpful friend of Terry Sanford called to let us know what happened to the Varmint Dinners. The dinners continued while Sanford was President of Duke University and lived at Knight House on Pinecrest Road, but once he stepped down as President and moved to a different residence, the dinner ended. The dinner written about above was one of the last Varmint Dinners held. Paul Vick, our source of information, attended and assures us it was a good one.