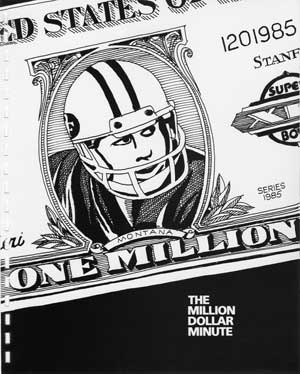 During this year’s Super Bowl, Kim Kardashian will spoof her own public image to promote a T-Mobile data plan. The cost of airing this half-minute commercial? $4.5 million. The price tag for a minute of airtime has grown exponentially since Super Bowl I, from the bargain rate of $150,000. Advertisers are willing to front the cost because Super Bowl commercials are a cultural phenomenon unto themselves—ad exposure is amplified far beyond television viewership on game day.

Super Bowl XIX produced network television’s first million dollar minute in 1985, prompting advertisers to ask, “Is it worth it?” The J. Walter Thompson (JWT) advertising agency set out to convince its clients that—with a stand-out, creative ad—Super Bowl advertising was indeed worth the price. The agency conducted marketing research following the 1985 game specifically to measure the impact of Super Bowl advertising. JWT interviewed over four hundred people about their football viewing habits and attitudes towards Super Bowl commercials, then summed up its findings in a report entitled, “Super Bowl XIX and the Million Dollar Minute: Anatomy of an American Institution.”

Over 100 million viewers tuned in to watch the San Francisco 49ers defeat the Miami Dolphins, 38 to 16, in 1985. This made it the tenth highest-rated show of all time, but it still fell short of the ABC network’s predictions and records set by past Super Bowls. The series finale of M*A*S*H* in 1983 still held the number one spot with a Nielsen rating of 60, compared to Super Bowl XIX’s rating of 46.

Even as football audiences were shrinking and Super Bowl viewership was in decline, the price of advertising spots continued to climb. “But,” JWT asked, “what about values beyond the ratings?” The agency argued that Super Bowl ads had a significant impact on Americans, beyond the number of viewers they reached.

Advertising during the Super Bowl was a gamble. Companies put down major financial outlays in the hopes that the impact of a Super Bowl ad would pay off. Thirty-six advertisers spent a combined $30 million for 52 minutes of commercials spread over six hours for the 1985 championship. JWT warned that an expensive ad could still be drowned out by the “chatter factor” of Super Bowl gatherings, or succumb to the power of the “remote-tuner zapping” channels.

JWT’s study confirmed the obvious with such observations as, “Super Sunday is a major social event” and, “Eating is a major part of Super Sunday.” But it also uncovered what makes a Super Bowl ad a unique opportunity for advertisers. Super Bowl advertisers had an automatic advantage with a significant segment of the audience. 14% percent of the viewers polled reported that they felt more favorable towards Super Bowl advertisers than the promoters they saw during the regular football season. Nearly half of the respondents were able to recall one or more commercials aired during the Super Bowl without any prompting.

IBM invested millions of dollars to air 13 spots sprinkled from the pre-game show through post-game programming. Apple took a different approach by publicizing its sole commercial in advance of game day. The company placed full-page ads in the Sunday newspaper, advising, “If you go to the bathroom during the fourth quarter, you’ll be sorry.” JWT had several high-profile clients in the Super Bowl that year, including Ford Motor Company, Hyatt Hotels, the U.S. Marines, and Miller Brewing Company.

Apple’s ad, in contrast, had a dark and brooding tone. The minute-long commercial, entitled “Lemmings,” aired just once during Super Bowl XIX. A line of blind-folded businessmen mindlessly trudged one by one across a barren landscape until they plummeted over the edge of a cliff. Apple promised to break the monotony of “business as usual” when it released the Macintosh Office computer. JWT’s study found that the ad was the both the most loved and the most hated game day commercial that year.

The J. Walter Thompson Company’s recommendations for how to make the most of a Super Bowl advertisement sound familiar. Specifically, advertisers should use supplemental promotions and tie-ins with other forms of media to ensure their ad gets noticed. “Create additional top spin,” JWT advised. T-Mobile has certainly done so. The company released its Kim Kardashian ad early, giving Conan viewers the first glimpse. The ad won over 6 million hits on YouTube in two days. Entertainment news outlets, bloggers, and Kardashian’s 28 million Twitter followers have given the commercial momentum before it even appears on television. What is this “top spin” worth? Maybe $10 million.