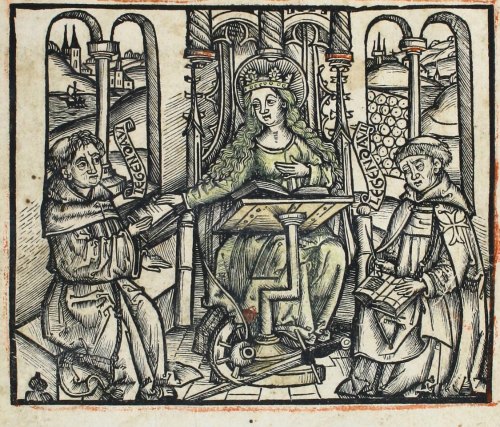 In June and July we’re celebrating the beginning of a new fiscal year by highlighting new acquisitions from the past year. All of these amazing resources will be available for today’s scholars, and for future generations of researchers in the Rubenstein Library!  Today’s post features a remarkable addition to the Sallie Bingham Center for Women’s History and Culture. Check out additional posts in the series here. The Library has acquired a rare incunable (item printed from moveable type in Europe before 1501), the Legenda de Vita S. Catharinae by Frater Petrus, published in Strasbourg on April 6, 1500.  It tells the story of St. Catherine of Alexandria, one of the most popular and important saints in late medieval Europe, and an enduring icon of women’s learning.  She was said to have won a debate with the Roman emperor’s elite philosophers over the value of Christianity, leading to her imprisonment and torture on the breaking wheel, now often called the Catherine wheel.

This edition includes seventeen beautiful woodcuts attributed to the artist known as the “Master of Terence,” who worked frequently for the book’s publisher, Johann Grüninger. The copy now in the Rubenstein Library, just the third known copy in an American institution, also features a contemporary binding with elaborate tooling and a brass clasp, and extensive rubrication both in the text and bordering the woodcuts.  It will reward a variety of research approaches, from literary scholars interested in book history and the popular medieval genre of saints’ lives to those working in women’s history, religious history, and art history.