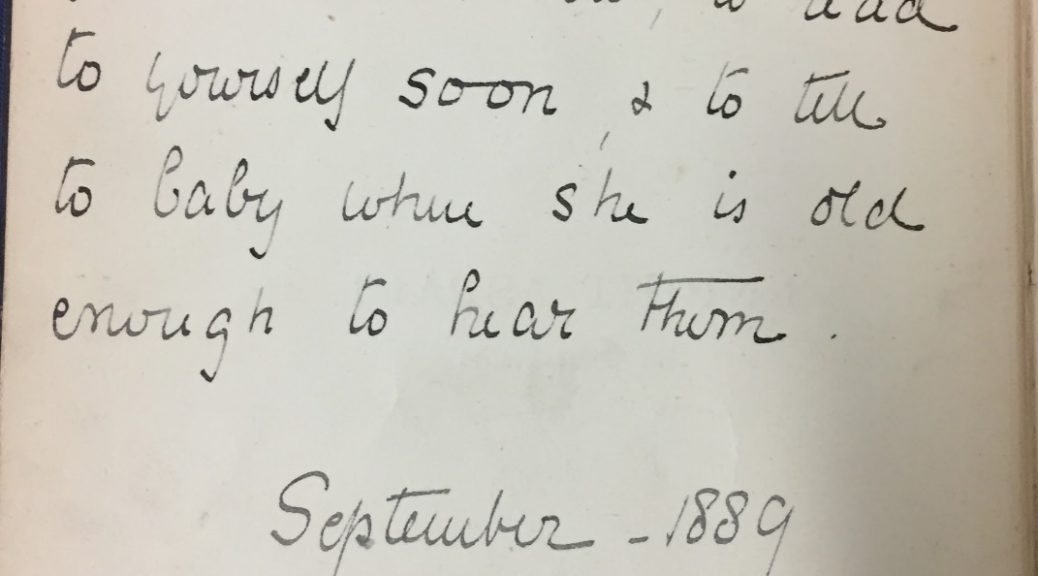 When I open books, one of my favorite things to do is look for small signs of its previous owners, its provenance: Was the book a gift, with a thoughtful note to the recipient? Did the owner write her name, big and bold, on a flyleaf? Sometimes there are so many signs that a separate story, that of the owner, begins to emerge. This was the case with Una Vincenzo, Lady Troubridge and her copy of Knight Asrael: and Other Stories, written by her aunt Una Ashworth Taylor.

Una Vincenzo, Lady Troubridge was born in 1887 to a family steeped in literary culture. Not only did her aunt Una write Knight Asrael, but her other aunt Ida wrote several novels, contributed regularly to 19th century magazines, and published biographies on Lady Jane Gray, Queen Hortense, and Madame Roland (Palumbo-De Simone, 2004). Her grandfather, Sir Henry Taylor,  was a well-known dramatist and poet (Reger, 2004). This literary heritage is felt early on in Una Vincenzo’s copy of Knight Asrael. Una Ashworth Taylor wrote a deeply personal inscription to her nieces, one explicitly connecting baby Una and her older sister Violet to literature, to the power of reading:  “Here are your stories, Violet, for you to listen to now, to read to yourself soon, & to tell to baby when she is old enough to hear them. September-1889.”

Although it’s unclear if Violet read the chivalric stories in Knight Asrael, Una seems to have, or at the very least, she enjoyed its opening pages. On the front pages of Knight Asrael, there are exuberant blue drawings, signed by their artist: U.T.

While these drawings might be some of the earliest known Una Vincenzo works, they are not the last: Una trained at the Royal College of Art, ultimately focusing on sculptural works (Ormrod, 1984, p. 29). A bust of the famed Russian ballet dancer Vaslav Nijinsky cast by Una now lives at the  Victoria and Albert Museum.

Una Vincenzo left one more sign in Knight Asrael, an inscription of her own on the title page: “Radclyffe-Hall & Troubridge, Chip Chase, Hadley Wood, Herts.”

Radclyffe Hall is the author of several novels, most notably The Well of Loneliness, an influential work in lesbian literature.  She and Una met in 1915 and moved in together in 1919—after Una formally separated from her husband, Admiral Ernest Troubridge (Ormrod, 2004, p. 65, p.133).   Una and Radclyffe (also known as John) were romantic partners for 28 years, living together at Chip Chase and abroad, until Radclyffe’s death in 1943 (Baker, 2004). Una documented their lives together through photography

and a biography published after Radclyffe’s death, The Life and Death of Radclyffe Hall. And even after death, Una continued to write letters to her beloved (Ormrod, 2004, p. 286).

When the provenance in Knight Asrael is taken together, the life and loves of Una Vincenzo, Lady Troubridge begins to break through: her artistic endeavors, her literary nature, and her deep love for Radclyffe Hall. Una ultimately lived to the age of 76, dying in 1963 in Rome, Italy (Ormrod, 2004, p.313).

The Rubenstein Library acquired its copy of Knight Asrael as part of the Lisa Unger Baskin Collection, a transformative collection documenting the lives and work of women across several centuries.