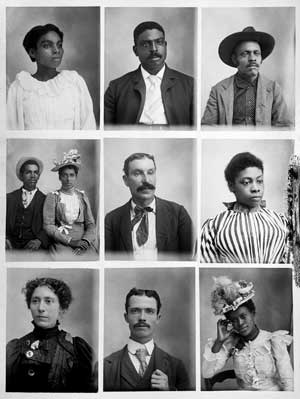 The portraits of Durham photographer Hugh Mangum are the subject of a new exhibit, opening July 22nd at the Museum of Durham History’s History Hub. “Hugh Mangum on Main Street: Portraits from the Early 20th Century” shows Mangum’s largely unknown portraits of Southern society after Reconstruction.

Mangum was born in Durham in 1877 and began establishing studios and working as an itinerant photographer in the early 1890s. During his career, Mangum attracted and cultivated a clientele that drew heavily from both black and white communities, a rarity for his time. Mangum’s photographs are now part of the Rubenstein Library’s Archive of Documentary Arts.

“Although the late-19th-century American South in which he worked was marked by disenfranchisement, segregation and inequality — between black and white, men and women, rich and poor — Mangum portrayed all of his sitters with candor, humor, and spirit. Each client appears as valuable as the next, no story less significant,” said curator Sarah Stacke. “His portraits reveal personalities as immediate as if the photos were taken yesterday.”

Stacke, a photographer and a 2014-2015 Lewis Hine Fellow at Duke’s Center for Documentary Studies, and Margaret Sartor, who teaches at CDS, are working together on a book about Mangum’s life and work. This new exhibit expands on “Keep All You Wish,” an exhibit of Mangum’s work that Stacke curated for CDS in 2012.

“Hugh Mangum on Main Street: Portraits from the Early 20th Century” opens at the History Hub, 500 W. Main St., on Tuesday, July 22 and runs through August. The exhibition will be in the Our Bull City area.

The public is invited to a launch party for the exhibition on Wednesday, July 23, from 5:30pm to 7pm, and a program on Mangum and his work at 3pm on Sunday, August 10.There is no charge for the exhibit, program, or party. The Hub is open Tuesday-Saturday, 10am to 5pm.