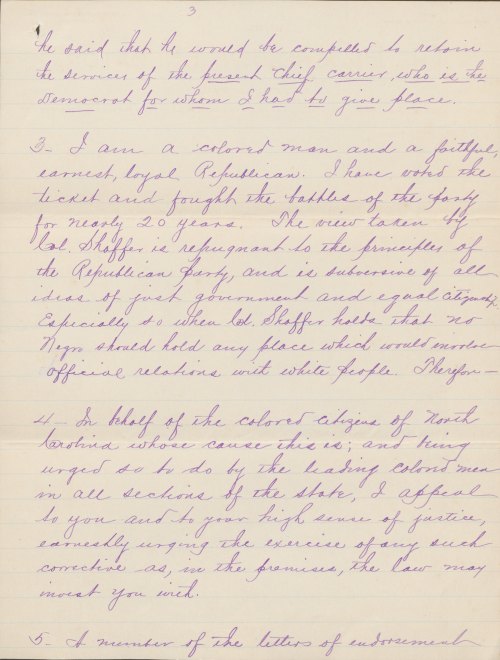 Episode 3: Into the Fire (1861 – 1896) traced the tumultuous journeys of African Americans from slavery to freedom in the second half of the nineteenth century. The Civil War opened as a battle to preserve the Union, but as enslaved men and women flocked to Union lines searching for freedom, their actions transformed the war into one for emancipation.

Kate Foster, a white woman from Adams County, Mississippi, kept a diary during the Civil War. In this entry from July 16th, 1863, she writes about the slaves who abandoned their masters in pursuit of freedom with the union army.

At the conclusion of the war, freed black men and women set out to build new lives learning to read, buying land, building institutions, and raising families.

After the 15th Amendment guaranteed black citizens’ right to vote, they used the ballot to elect African American city councilmen, state legislators, and congressmen to office. But white southern Democrats swiftly retaliated against these challenges through lynch mobs and violence at the ballot box, eroding African Americans’ newfound citizenship.

Mr. P. Joiner writes to Editor John Bryant in 1868 reporting the shooting of a black man by white democrats near Albany, Georgia. The white mob then continued on a rampage through the countryside, warning African Americans that it was “their country and they was going to rule it.” (John Emory Bryant Papers)

The 1890s brought a wave of state constitutional conventions across the South, aimed at systematically disfranchising black residents. These actions were buttressed by the Supreme Court’s Plessy v. Ferguson 1896 decision, supporting the principal of a separate but equal society and paving the way for legal racial segregation. As the twentieth century dawned, the full citizenship black Americans had so briefly experienced seemed like a distant hope.

Charles Hunter was born a slave in Raleigh in 1851 and spent his life pushing for the advancement of African Americans. In 1889, Hunter writes to the Postmaster General in Washington, D.C., protesting the white Raleigh postmaster’s refusal to appoint Hunter due to his race.