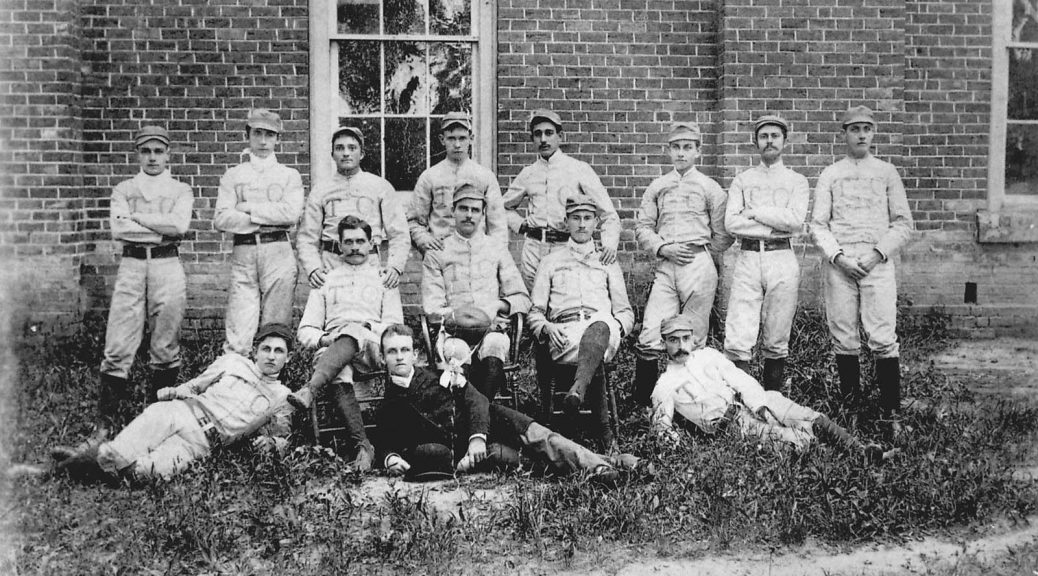 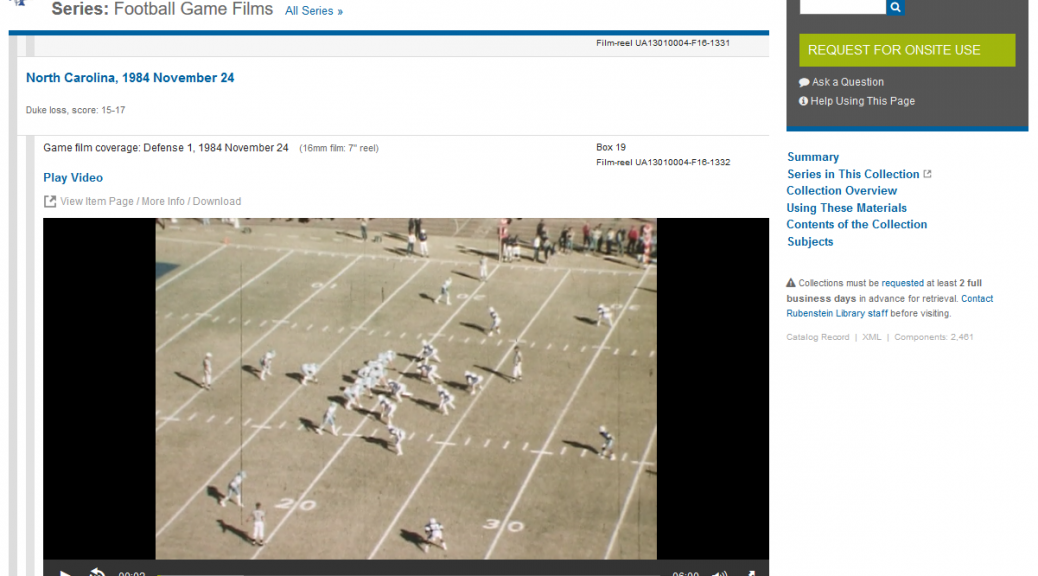 Duke University Archives is very proud to announce that select films of football games made by Duke Athletics are now available for viewing on the web!

This is exciting news for us, and we hope you will be excited, too. The digitized films are available in two different ways: within the complete collection guide and directly from the Duke Digital Repository.

Not all of the films are available, unfortunately, as not all have been digitized yet. Only the football game films that have been requested by our users and digitized within the last ten years or so can now be viewed by anyone. The story of how these films became available is a bit complicated, and demonstrates why making digitized content of archival materials is never as easy as folks might think.

The football game films have been in the archives since the 1980s, with additions coming in occasionally. The older films are all actual films – 16mm films, to be more precise. Later films were made on video, including Betacam and DVCam. In total, there are about 2,500 films representing more than 80 years of football games at Duke. Staff have made copies of some game films for people to view since the originals first came the Archives, and as time went on the format of these copies changed: we have use copies of films on VHS, Betacam, DVD, and digital files.

To keep an inventory of these films, Archives staff created an Access database in the mid-2000s, which includes both football and basketball films. This database included the date of the game, the opponent Duke played, and the outcome of the game, as well as how many films had been made of the game and what boxes they were in. The database was later made available online so people could search it and find games they were interested in seeing, and also included some information about use copies.

Unfortunately, the database was difficult, and then impossible, to update. We received more films from Duke Athletics, and more use copies were made, but the database didn’t include these new items. Also, our methods of keeping track of individual films changed. Our current archival practice for handling sound and motion picture recordings is to give each item a unique number so we can track it, and track any copies made of it. The database was made before we assigned these unique IDs to the films, so staff created a spreadsheet with information from the database plus the unique ID assigned to each film.

What’s more, we now manage all of the information about all of our collections in a separate, much larger database, ArchivesSpace. The sports film database could not talk to ArchivesSpace, and the spreadsheet version with the unique IDs wasn’t formatted to go into ArchivesSpace, either.

By 2016, we had well over a hundred boxes holding a couple thousand films of football games (and a similar situation with basketball films), and we had quite a lot of description about the games divided across several places, plus use copies of films and a few dozen digital files of games that people had requested, none of which were easily accessible to the public.

We know people want to see these films. We want people to see these films! So we set to work to figure out how to get a full list of all the games we had, in the same place and format where we keep all the information about our collections; how to let people know which ones have been digitized already; and also let people actually watch the ones that have been digitized.

First I had to get all the metadata about the films together into one place, formatted consistently, with the unique IDs we use to track them included. This involved lots and lots of spreadsheets. I used the original Access database, two different Excel spreadsheets that had been created to assign unique IDs and format data, and OpenRefine. I spent a lot of time cleaning up dates, moving things around, and just so much copying and pasting. I also had to figure out how to organize the films in a way that made sense both to human beings looking at the lists and the way ArchivesSpace stores and displays description. Finally, after months of wrangling spreadsheets, I got the description for football films from the 1930s through 1993 organized by opponent, in chronological order, with any other description we had (final score, what part of the game an individual film covered), and into ArchivesSpace. We created a collection guide that was available online, showing all this information, hooray!

After that, there was still a lot of work to do to get the digitized films available for streaming online. I worked closely with Craig Breaden, the Audiovisual Archivist, to figure out what had been digitized and where those files were. Craig and I also worked extensively with Molly Bragg and Moira Downey in the Digital Production Center to get the digitized films into the Duke Digital Repository, the home of our digital collections. Moira did a ton of work and was very patient with me while we worked out how to do this, since it involved once again making sure the metadata we had was formatted in a way that worked with the DDR systems, that we knew what and where the files were, and many other steps.

Getting digitized archival material available for almost seamless viewing by the public takes a lot of preparation and work behind the scenes. The technologies we use to make copies of recordings, the methods we use to keep track of our materials, and the way we store and display materials online all change rapidly and frequently, so any endeavor like this, even one that seems simple, takes multiple people, multiple systems, and a surprising amount of time. So far, there are 38 films from the Football Game Films Collection available online, but there is still a lot of work to be done with this collection: there are more films to add to the collection guide, and other copies made of films that we hope to make available.

The staff of University Archives is very excited to make the digitized football films available, and we’re glad all our work went in to something we think a lot of people will enjoy. I’m currently working on repeating this process with the Basketball Films, so stay tuned!