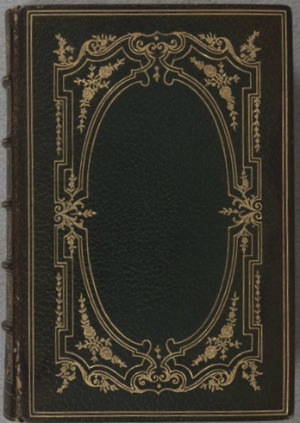 Today, 31 May 2013, is the 194th birthday of Walt Whitman.  The Trent Collection of Whitmaniana in the Rubenstein Library is one of the largest collections of Whitman’s manuscripts and printed works in the world.  Just in time to celebrate the Good Gray Poet’s birthday, a beautifully “wrapped” new addition to the collection is available for research.

From an otherwise unremarkable edition of Whitman’s Prose Works, the copy newly arrived at the Library was lavishly extra-illustrated and expanded into two leather-bound volumes by an early owner, with the addition of 26 autograph letters and manuscripts and one hundred portraits and views.  Extra-illustration, also known as Grangerization, involves the addition by a collector of separately produced items such as portraits and manuscripts to a printed text.  Controversial today because it involves dismantling and transforming books, the practice was quite popular in the nineteenth century; this example is from the early twentieth century, perhaps the 1920s.

Many of the added items are of interest, including a manuscript slave deed and letters by Whitman friends and notables such as John Burroughs, John Swinton, William Cullen Bryant, Henry Wadsworth Longfellow, and General William T. Sherman.  Most importantly for Whitman scholars, the first volume contains a page of Whitman’s manuscript notes on the Quaker preacher Elias Hicks.   The manuscript had fallen into three pieces due to being folded into the binding; thanks to the work of Conservator for Special Collections Erin Hammeke, it has been repaired and remounted. While we cannot say with certainty who created these extra-illustrated volumes, the second volume bears the bookplate of Mary Young Moore, a Papal countess for whom a high school on Staten Island, New York is named.  Given the connections of both Whitman and Hicks to New York City, this manuscript fragment may have especially appealed to Countess Moore.