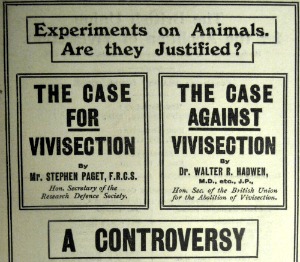 As a volunteer for the History of Medicine (HOM) Collections, one of my projects was to create subject guides for several of the Collections’ strengths. I focused on collection strengths in areas of anesthesia, human sexuality, materia medica, pediatrics, psychiatry, vivisection, and yellow fever. I spent the past few weeks gathering sources and images to highlight the HOM’s interesting collection of vivisection materials, many of which come from the large vivisection pamphlet collection.

A significant amount of the collection features philosophical debates between those who regard surgery on live animals for experimental purposes as cruelty and those who support vivisection for benefits stemming from progress and advancements in medical science (e.g., creation of immunizations and vaccines). Many photographs and drawings in the vivisection pamphlet collection show how dogs were used as test subjects for medical experiments. In one photograph, it is evident from its posture that a dog that had its pituitary gland removed is undergoing discomfort; the image was taken hours before its death. In another drawing, a dog appears to have had its hind legs bound and one of its forelegs sealed. The caption underneath reads, “They who know the pain of a limb even a short time in a cramped position can imagine the sufferings of this dog.”

On the other hand, animal experimentation has played a crucial role in helping to develop immunizations against infectious diseases, such as polio and diphtheria. The photographs below feature children whose lives were saved by antitoxin discovered through medical research using animals. In an attempt to appeal to people’s emotions and gain acceptance for animal experimentation, one of the captions contains a suggestion for others to imagine their own child as one of the pictured victims of infantile paralysis. The question is asked, “Would you hesitate to sacrifice under ether one or more animals if through the knowledge gained the disease could have been prevented, or your child could have recovered without being crippled?” The vivisection controversy brings up other provocative questions: Is animal experimentation justifiable if it results in the possibility of a cure/immunization/vaccine for a disease (e.g., cancer, HIV/AIDS)? Do the benefits of eradicating diseases for humans outweigh the suffering and pain caused to animals in medical research? Does the use of anesthesia make vivisection more acceptable? Are there parallels between animal vivisection and human vivisection as historically conducted by the Nazi and Imperial Japanese armies? Come examine the materials in the History of Medicine Collections and develop your own conclusions.