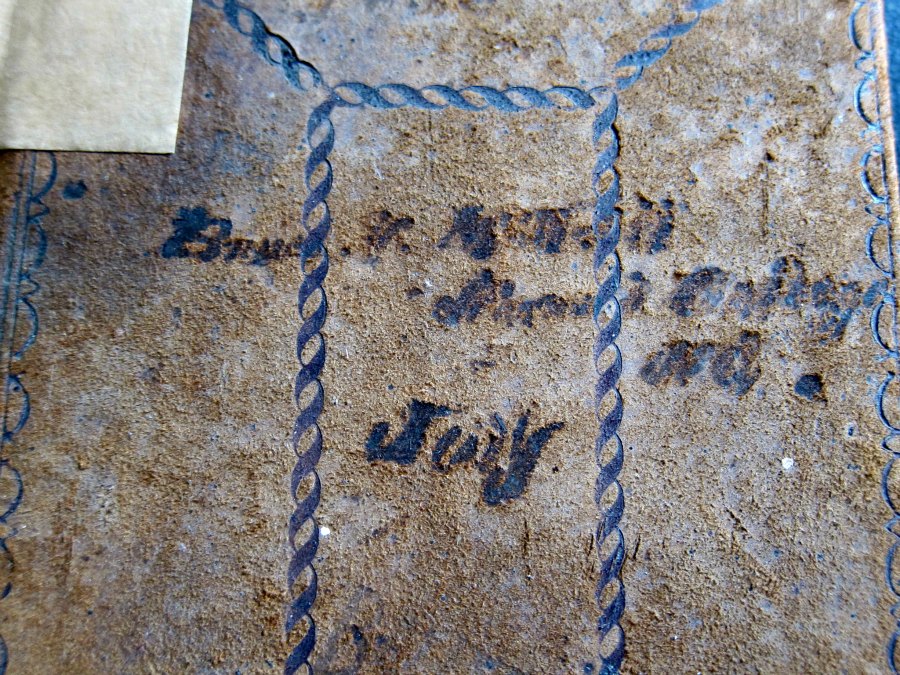 Our manuscripts cataloger, Alice Poffinberger, recently showed me a merchant’s daybook from Normal College, Randolph County, NC. For those unfamiliar with the history of Duke, Normal College was renamed Trinity College in 1859, which was renamed Duke University in 1924. The Normal College daybook dates from 1852 to 1853, and includes the names of the school’s students and faculty, including its president, Braxton Craven, and Enoch Faw.

Identifying the name of the merchant or store, however, has proven to be a challenge. It was first cataloged in the 1940s as the S. C. Bruce Daybook, even though Bruce’s name appears prominently as a customer, not the merchant. Later attempts to trace the origin of the daybook culminated in consulting the 1850 census. They deduced that because both William Moffett and N. D. Bain were listed at households no. 6 and no. 8, respectively, and because both were listed as merchants, that the daybook likely belonged to the firm of Bain & Moffett. Also, on the upper left corner of the daybook’s front cover are the letters B and M with what was thought to be an ampersand between them.

While the item is cataloged as the “Bain & Moffett [?] Daybook,” Alice and I remain unconvinced that this is its true identity. It may be difficult to tell from the photographs, but in person, the branding on the cover looks more like Bruce than Bain and what is thought to be Moffett looks like it could be McNeill. What’s been assumed to be an ampersand looks more like an H or N.

The North Carolina Digital Heritage Center’s DigitalNC site provides access to city directories from across the state. Unfortunately, the earliest available issue for Randolph County was published in 1894, making our wish to positively identify the daybook’s original owner a bit more difficult. We will continue to pursue this item’s identity as time allows. We will also graciously accept any help or insight.

What do you think? Is it Bain & Moffett, or something completely different?