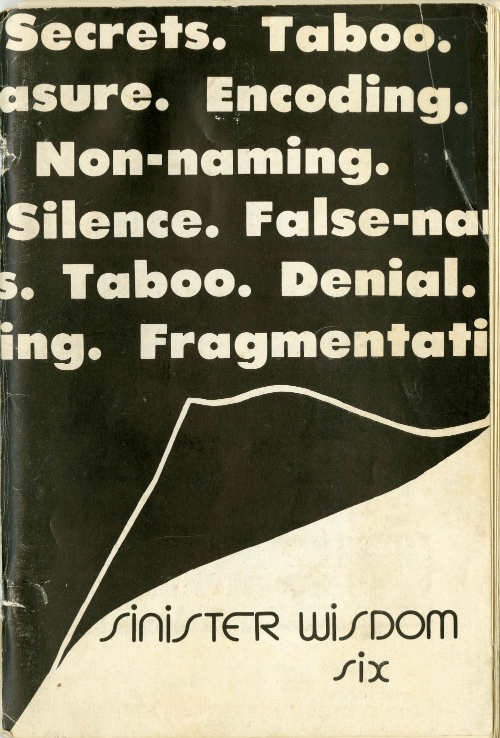 With great admiration, the Rubenstein Library pays tribute to Catherine Nicholson (1922-2013), theater director/producer, and pioneering co-founder and editor of Sinister Wisdom, who died June 16, 2013. Nicholson’s papers, which are held by the Sallie Bingham Center for Women’s History and Culture, document her life as a scholar and activist. Beth Hodges, former contributing editor, honored Nicholson with an obituary to be published in the fall issue of Sinister Wisdom. Hodges writes, “Friends remember Catherine as a dedicated lesbian feminist cultural worker, gifted writer, thinker, teacher, conversationalist, and a steadfast friend. Catherine possessed exceptional abilities, vision, and creativity and was also unusually motivated and self-disciplined. She chose to do her best in whatever she undertook, be it acting; directing; editing and publishing a women’s journal; [and] teaching theater and producing the world-premiere of a Monique Wittig play.”

With her partner, Harriet Ellenberger, Nicholson founded Sinister Wisdom, subtitled “A Journal of Words and Pictures for the Lesbian Imagination in All Women.” Hodges writes, “Sinister Wisdom became Catherine and Harriet’s life, took over their house, determined they would drive a truck rather than a sports car, even decided where the couple would live. The job of ‘creating a women’s community on paper,’ as one woman put it, was all-consuming.” Michelle Cliff and Adrienne Rich were the next editors to take the helm of Sinister Wisdom, which continues to be published today under the editorship of Julie Enszer.

Several students from the Duke Women’s Studies Senior Seminar class “Feminist Theory: Durham 1960-1990,” taught by Professor Kathy Rudy during spring, 2013 used this collection in their research on Durham’s activist community of the 1960s-70s. One of those students, Chantel Liggett, received the Middlesworth Award for her paper “Divergent Priorities, Diverging Visions: Lesbian Separatist versus Gay Male Integrationist Ideology Surrounding Duke in the 1970s and 80s.”