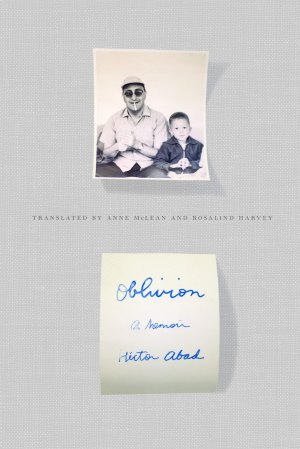 Abad will receive the award on November 28 at Busboys and Poets in Washington, D.C. The event will include a reading of Oblivion and a discussion of how the human rights situation in Colombia has evolved since the death of the author’s father 25 years ago. Abad will then travel to Durham, North Carolina, to do a reading on November 29 at 5:00pm in the Rare Book Room of Duke’s David M. Rubenstein Rare Book & Manuscript Library.  For more information on the reading, contact Patrick Stawski at (919) 660-5823 or patrick.stawski@duke.edu.

Abad’s book begins with the author’s memories of his father, Dr. Héctor Abad Gómez, who developed practical public health programs for the poor in Medellín, Colombia. The increasing violence and human rights abuses of the 1970s and 1980s led Gómez to fight for social justice in his community. As a physician, he recognized the violence as a societal sickness in need of a cure, but his political views put him at odds with those in power, and they labeled him as sympathetic to Colombia’s left-wing guerrilla groups. In Oblivion, twenty years after his father was killed by a right-wing death squad, Abad pays homage to the man who continues to inspire him, and he shows us the importance of standing up against injustice.

Judges for this year’s competition called Abad’s book “deeply moving,” “beautiful,” and “original,” recognizing it for painting a heartfelt picture of how damaging political violence is for victims and their families and for stressing the importance of fighting for social justice and the respect for human rights, despite staggering opposition.

Award judge Holly Ackerman described Oblivion’s main accomplishment as its ability to “make us deeply feel the value of every human life and the terrible consequences of political violence wherever it occurs. It is a universal vignette… The book sharpened and renewed my conviction that ‘recognition of the inherent dignity and of the equal and inalienable rights of all members of the human family is the foundation of freedom, justice and peace in the world.’”

According to Leonor Blum, the chair of this year’s award judging panel and emerita professor of history and political Science at Notre Dame of Maryland University, the book “is a sensitive portrayal of the multiple facets of this modern Don Quixote who is idealistic to a fault, who cares about ‘el pueblo,’ who lives a middle class life surrounded by a loving family with its laughs, quirks, and tragedies.”

“It kept me up at night and brought me to tears and will bring, at least in my mind, something like eternal life to the murdered Doctor Héctor Abad Gómez.” says journalist, writer, and  award judge Roger Atwood.

Robin Kirk, Director of the Duke Human Rights Center, explains that she chose this book “because it offers us something new and challenging, something surprising and hard—being an activist and making a difference can sometimes cost your life.”

Previous WOLA-Duke Human Rights Book Award recipients include: Katherine Sikkink for The Justice Cascade in 2011; Victoria Bruce and Karin Hayes, with Jorge Enrique Botero for Hostage Nation in 2010; Ambassador Heraldo Muñoz for The Dictator’s Shadow: Life Under Augusto Pinochet in 2009; and Francisco Goldman for The Art of Political Murder: Who Killed the Bishop? in 2008.