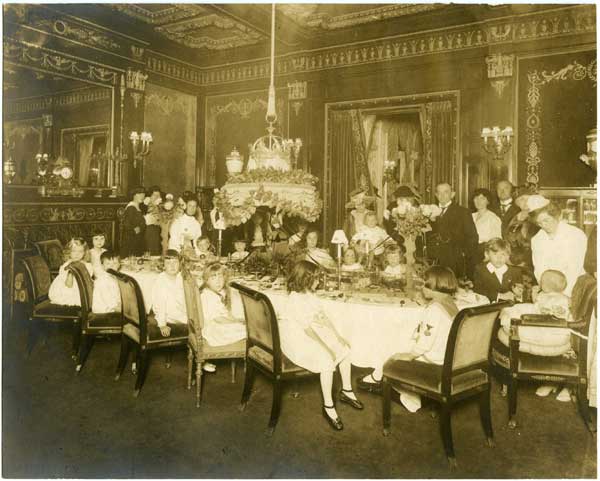 Happy birthday to our super blog, which turns five today! We took a quick look at some numbers (although apparently age is more than just that) and found that the blog racked up 54,901 pageviews this year—so thank YOU, dear readers, for coming along with us on our explorations of the Rubenstein Library’s very cool collections (and the very cool people who work with them). We hope you’ve enjoyed it as much as we have!

We went looking for something appropriately celebratory to share, and didn’t have to look farther than the papers of our own Benjamin N. Duke. Isn’t this just about the fanciest birthday party you’ve ever seen? The photo dates from around 1916 and includes Mr. Duke himself (he’s standing behind the bouquet on the table). It was taken in New York City, at the house next door to Mr. Duke’s own mansion at 1009 Fifth Avenue (2 East 82nd Street, to be exact).

We’re not certain, but we’re wondering if this might be a birthday party for Mr. Duke’s grandson (and future U.S. ambassador), Angier Biddle Duke, who was born in 1915. If only the baby seated at the head of the table on a plump cushion had his head turned toward the camera. . . . If you have any information about the photo, send us an email!

Also, inspired by this photograph, we are thinking of trying to invent the combination piñata-chandelier. If you have any ideas about that, send them to us in an email as well.