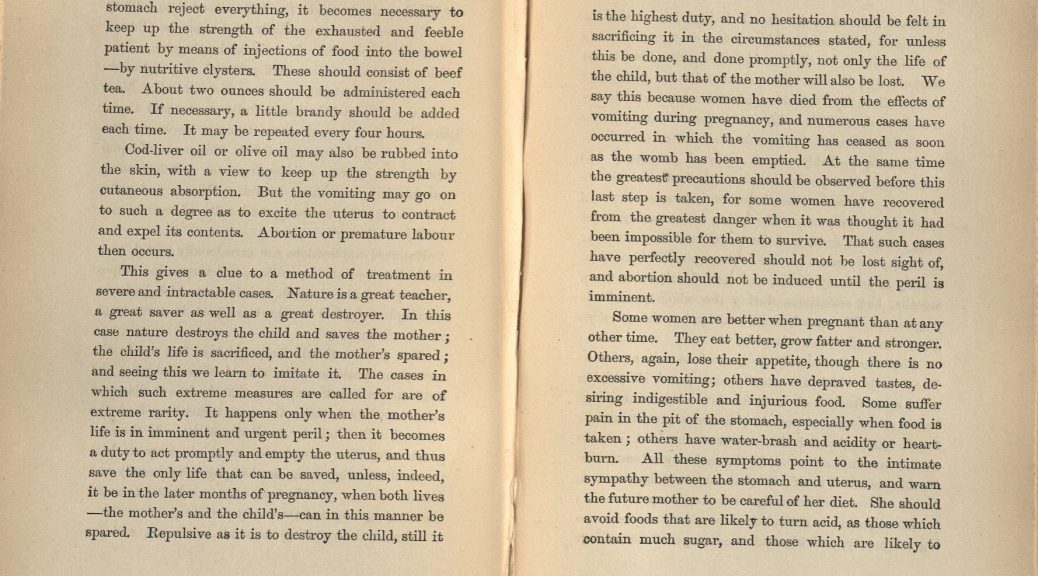 The History of Medicine special collection houses many exciting—and, dare we say, sexy—artifacts that draw the interest of students, staff, and researchers. The carved ivory memento mori is a thing of beauty. The amputation set invites people to picture themselves on a battlefield during the Civil War. Anatomy and dissection are contemplated as one looks at flapbooks and manikins.

But what draws me in? The written word. The books, the pamphlets, the zines—they are the voices echoing to me through time.

With abortion constantly in the news at this cataclysmic time, and with a young child with many questions about puberty, I threw myself into the History of Medicine Collections as its latest intern, wanting to know, “What do we say about puberty? About menstruation? About abortion? What do doctors say? What do mothers say? What does corporate America say? For heaven’s sake, what do we tell the children?!” Here is a small sampling of what the special collection offers.

The Ladies’ Physician: A Guide for Women in the Treatment of their Ailments by a London Physician is a book from 1884. This guide has several redeeming factors. It makes clear that it is the mother’s duty to inform their daughters of what to expect before menstruation begins. While not always feasible (what does one do when there is not a maternal figure in the child’s life?), I generally like the attitude that we do not leave young girls and women in the dark regarding their health. In some ways, the text is very thorough in covering many common issues that women might experience, including the more benign, such as leukorrhea (“the whites”, or simply, vaginal discharge), to the more serious, such as tumors and endometritis. This was somewhat shocking to me as, anecdotally, I hear from many women that their endometritis was ignored by health providers for many years before being properly diagnosed. Pregnancy and many of the possibilities an expectant mother might experience as the body changes are also covered—from varicose veins to constipation to neuralgia of the face.

The section on pregnancy begins with a quick history of how much has been discovered recently—such as how physicians can now say with certainty that a person is pregnant by using a stethoscope and auscultation. Only sixty years ago, our London Physician tells us, did a woman claim to be pregnant by the Holy Ghost and had many followers who believed her, including people in the medical field. (Actually, the London Physician says “medical men”, and I wondered if midwives were at all involved.) Different signs of pregnancy are written about, but we are also told that there may not be any signs at all, at which point, a story is told about a Mrs. G—–, which feels straight out of a modern showing of “I Didn’t Know I Was Pregnant”. Neither Mrs. G—– nor the neighborhood physician ever guessed she was pregnant, and indeed she was in labor and they still did not suspect that she was giving birth. Ten hours into labor, another doctor examined her and realized what was happening, though the expectant parents still did not believe it. The story has a happy ending—healthy mom, healthy and loved daughter. The London Physician also tells us that the opposite can occur, when a person thinks they are pregnant when they are not, whether it is due to false signs from tumors, an abnormal menstrual cycle, or simply gas or muscles twitching.

As one might expect, The Ladies’ Physician has its problems and questionable moments, too. The causes of puberty and menstruation are written about obtusely—I could not guarantee that a person without some prior knowledge of menstruation would completely understand what the book is saying happens during “the process which marks woman as woman.” (I will not even get into how this is not how we define “woman” anymore because now we know not all women experience menstruation.) The text also does not include visuals. At another time, the London Physician gives somehow not enough information by giving us too much information. We are initially told the average pregnancy is about nine or ten months, but the London Physician goes on for a distressing couple of pages about how some countries and cultures think that the duration of pregnancy lasts longer–three hundred days, or even going into years, the most being four years. (FYI: Elephants have the longest pregnancies of any land mammal, somewhere between eighteen to twenty-three months.) I do not know if this was simply an interesting point about varying belief systems, or to go back to the point about how physicians have recently learned more about pregnancy, or to cover all the bases of how long one might be pregnant in case somebody is incorrect.

One section regarding abortion was interesting to me, and I feel the need to quote it to get it exactly right. From pages 222-223, regarding severe cases of illness:

The cases in which such extreme measures are called for are of extreme rarity. It happens only when the mother’s life is in imminent and urgent peril; then it becomes a duty to act promptly and empty the uterus, and thus save the only life that can be saved, unless, indeed, it be in the later months of pregnancy, when both lives—the mother’s and the child’s—can in this manner be spared. Repulsive as it is to destroy the child, still it is the highest duty, and no hesitation should be felt in sacrificing it in circumstances stated, for unless this be done, and done promptly, not only the life of the child, but that of the mother will also be lost.

Another section about quickening was of interest from page 196. The London Physician does not think this is the moment a child is considered alive, instead that the

They do not know when the child possesses a soul but

…[l]et it suffice here to say that from the time of conception there is life in the embryo, simple though it be when compared with the higher life of a born child or an adult man, yet too complex to be solved by the greatest philosopher.

I think the London Physician dropped the mic there, so I will end here as well.

Some of this blog post was written tongue-in-cheek, but that does not discount how I think on this book. In 1884, women had something to refer to that gave them reassuring and helpful information regarding their bodies. The information is given in a matter-of-fact manner, not sensationalized or hidden in shame (though we could work on some bits for clarification). It still leaves me with many questions—how many people had access to this book? Who was the London Physician? What did people do if they did not have access to a book like this? I am assuming they sought other women for advice, or at least I am hoping they did.