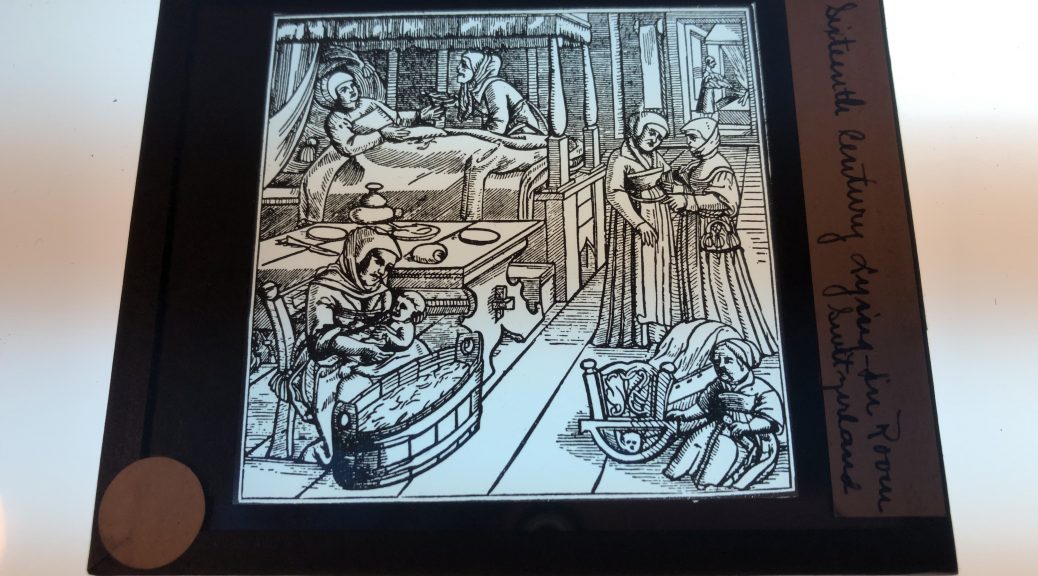 Pregnancy and birth, as universal and unvarying phenomena, can offer a revealing and reflective view into a specific historical chapter. Careful attention to the dynamic nature of the circumstances that have historically defined the experiences of pregnant and birthing women can help us contextualize and better understand our present moment. The relationship is bidirectional: so too does an exploration of historical factors help shed light on the rationale for trends in the medicalization of birth. The aid of a generous History of Medicine travel grant allowed me to spend time with a number of fascinating collections at Duke’s David M. Rubenstein Rare Book & Manuscript Library that can offer such insight. These included, for example, the collection of medical instruments from the practice of Dr. LM Draper, the Louise Hortense Branscomb papers, and the Wilton G. Fritz Collection Artifacts.

In the United States, the circumstances of birth changed dramatically toward the end of the Progressive Era. Prior to the twentieth century, the care of pregnant and birthing women was most commonly the domain of midwives and other female practitioners, who were not incorporated into a recognized professional body. The shift toward a physician-centric approach can be traced back to a revolution within the medical profession, beginning in the late 1800s and continuing well into the following century. The wide variety of obstetrical tools surviving from Dr. LM Draper’s twentieth-century collection offers insight into standard practices of American physicians of the day. I was particularly intrigued by the array of various iterations of forceps, insinuated as they are in the medical profession’s early- and mid-century proclivity toward instrumental intervention in labor, an intentional move to set physicians apart from low-interventionist midwives.

The glass slides for Dr. Carter’s OB/GYN lectures provided a window into the education aspect of the medical approach to obstetrics. Such primary sources set forth the gold standard of mid-century medical education of the day. The use of visuals in the slides informs an understanding of the historical pedagogical practices in this field, while the language employed clues us into the sociocultural milieu that circumscribed and defined medical education of the day.

The medicalization of birth that took shape in the early twentieth century has attracted both celebration and criticism. Many have critiqued physicians, both in this period and since, for their quickness to instrumentally intervene in birth and their failure to outperform more hands-off midwives in terms of clinical outcomes. In the early twentieth century, Abraham Flexner, under the aegis of the Carnegie Foundation, set out to survey the state of medical education in the United States and Canada. His 1910 report eviscerated the medical profession, suggesting that a vast majority of American doctors were woefully unqualified and had received what little education they possessed from institutions of highly dubious rigor and quality. “But the very worst showing,” he noted, “is made in the matter of obstetrics.”