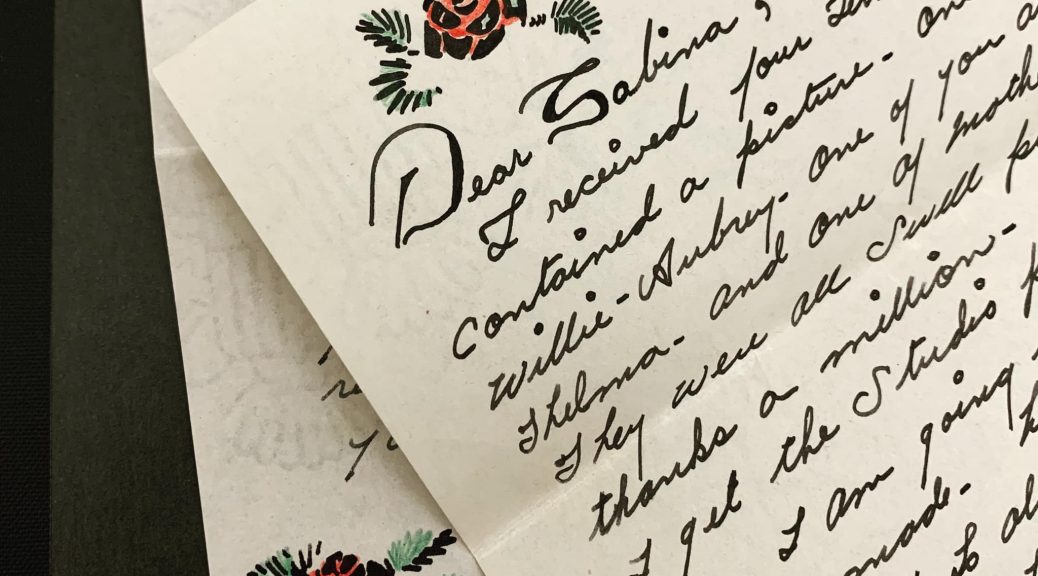 The Carl V. Corley papers at the Rubenstein document the career and artistic output of Carl Corley, a white novelist and illustrator, and notably include works of gay fiction and homoerotic art. Even more notable is the fact that Carl always signed his works with his real name. A recent addition to Corley’s papers, consisting largely of correspondence from Corley to a woman named Sabina Allred (later Sabina Allred Allen), greatly enhances and complicates our understanding of Corley, his life, and his work.

The Sabina Allred Allen Collection of Carl Corley Papers, received in February 2022, contains World War II-era love letters from Carl to Sabina. In these letters, he frequently addresses how much he loves and misses Sabina, as well as their plans for the future (engagement, marriage, etc.). Carl wrote to Sabina almost every day until his transfer overseas, after which time he still wrote to her at least weekly.

Also included in this addition of material  are illustrations of Sabina that Carl created and gifted to her. The artwork originally accompanied the letters that he sent during World War II, but the drawings were separated from the letters at some point after receipt. Most of the artwork depicts Sabina wearing different outfits and hairstyles, sometimes illustrating a style that Carl mentioned in a letter, while other pieces depict Sabina and Carl together. Several of the illustrations also feature a Southern plantation house that appears to be inspired by Tara from Gone With the Wind, one of Carl’s favorite works.

The World War II-era correspondence between Corley and Sabina ends in early September 1946, after Corley has returned home. In this letter, Corley ends their relationship, citing (among other things) how different they are from each other, as well as issues of trust. A couple weeks later, Sabina married Bobby Arnold on September 21, 1946. Sabina and Bobby divorced in May 1949, and she then married Dempsey Allen on June 13, 1949. Sabina and Dempsey Allen remained together until their deaths in 2008 and 2016, respectively, but Corley did re-enter Sabina’s life in 1999.

Carl Corley and Sabina Allred Allen reconnected in 1999 while Corley was working on his autobiography, which he refers to as “The Art and Writings of Carl Corley.” From these later letters, it seems that Carl reached out to Sabina for her help in reconstructing his adolescence, as well as to see the artwork he created for her during World War II. Sabina was a great source of inspiration for Carl’s artwork, so he likely viewed her as an important figure to include in his autobiography. Carl and Sabina continued to correspond weekly through at least April 2002, discussing politics, family, daily routines, collecting habits, and their past. Many of these letters also contain racist diatribes against Black Americans.

While Sabina Allred is only a blip on the radar in original materials acquired from Corley—she is featured in two small photos in his World War II scrapbook—this new addition suggests that perhaps Sabina’s role in Corley’s life was more significant than the original collection lets on. The addition also suggests that Carl may have been struggling with his identity as a gay man, as well as giving us a window into the bisexual practices of gay men during this period. The Sabina Allred Allen Collection of Carl Corley Papers adds a significant dimension to our understanding of Carl, and we look forward to having faculty, students, and researchers engage with this new material.