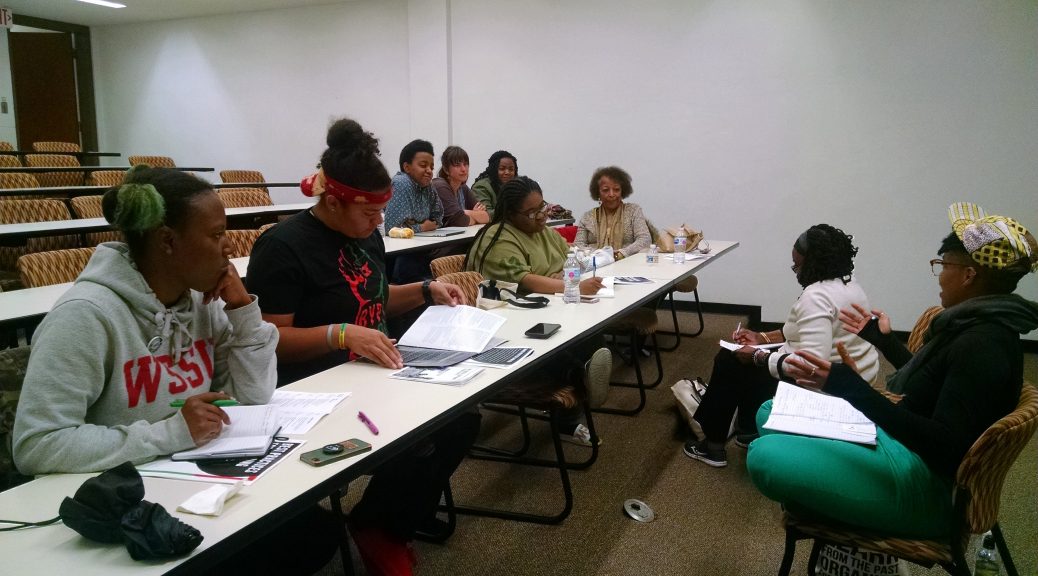 A new initiative developed by the Student Nonviolent Coordinating Committee (SNCC) Legacy Project (SLP), the Center for Documentary Studies at Duke University, the Duke Libraries, the New Georgia Project, BYP 100, and the Ohio Voice and made possible by a $630,000 grant from The Andrew W. Mellon Foundation, aims to document how today’s activists built their social and political movements.  An understanding of the present day mobilizing of protest and political organizing will allow future generations to learn from the experience of today’s movements, their development, and how their achievements offer practical lessons in the struggle for human and civil rights.

The multi-generational project team based in the Duke University Libraries will convene and record conversations among three generations of activists—SNCC veterans of the Emmett Till generation, young people of the Trayvon Martin generation now leading the Movement for Black Lives, and the new generation of organizers mobilizing in the wake of George Floyd’s murder.

“Over the past sixty years, the idea and ideal of American Democracy has been shaped by the three groups that will participate in the intergenerational discussions,” Courtland Cox, Chair, SNCC Legacy Project. A key goal of these conversations is to pass on informational wealth, knowledge and practical guidance between and among the generations. The dialogues will also allow contemporary activists to tell the story of their movements from their own perspective. Hence the project’s name—Our Story. Our Terms: Documenting Movement Building from the Inside Out.

“We at the Center for Documentary Studies are excited to nurture this essential sharing-of-work among people who are bringing us closest to the aspirations of self-determination and democracy. It’s a privilege to take part in this project with our partners — we’re paving the way for coming generations to build without fear of losing, forgetting, or ignoring their hard-won knowledge and what Courtland so aptly calls ‘informational wealth.’” Wesley Hogan, Director, Center for Documentary Studies at Duke University

The three-year project will also partner today’s activist organizations with early career archivists who have experience working with groups underrepresented in the archives. The idea is to bring movement organizers and archivists together to use practical and digital tools so that today’s organizers can tell their own stories on their own terms and ensure that their records endure. It will also provide training for those archivists to center ethical practices rooted in respect for community driven archives and learn from movement organizers. Documenting movements that are in-progress today will also serve to inform and encourage future activists and archivists alike.

At the conclusion of the project, a digital collection of pivotal historical materials documenting contemporary organizing efforts will be made available online. In addition, all materials generated by the Our Story Project, including the recorded conversations among activists, will be preserved and housed in the John Hope Franklin Research Center for African and African American History and Culture, part of Duke’s David M. Rubenstein Rare Book & Manuscript Library.

This isn’t the first collaboration between Duke and SNCC veterans. The Our Story Project will build on the example of the SNCC Digital Gateway, a widely used documentary website hosted by Duke that allows visitors to explore the history of the 1960s voting rights organization in detail. That groundbreaking initiative —also funded by The Mellon Foundation—brought together activists, academics, students, and archivists to create a digital history of SNCC that places the voices of SNCC veterans at its center.

“The Our Story Project is an outstanding example of how libraries and archives are learning from and sharing space with communities long underrepresented at elite universities, as well as advocating for increased representation of marginalized stories in our nation’s historical record,” said Deborah Jakubs, Rita DiGiallonardo Holloway University Librarian and Vice Provost for Library Affairs at Duke, one of the project’s principal investigators. “We are grateful for The Mellon Foundation’s generous support of this important work.”

To see examples of other collaborations between Duke, the SNCC Legacy Project, the Center for Documentary Studies, and other project partners, visit our webpage.

Eleanor C. Pressly: A Duke Alumna at NASA
Rights! Camera! Action! Presents “Granito: How to Nail a Dictator” (2011)
Pull for Your Candidate