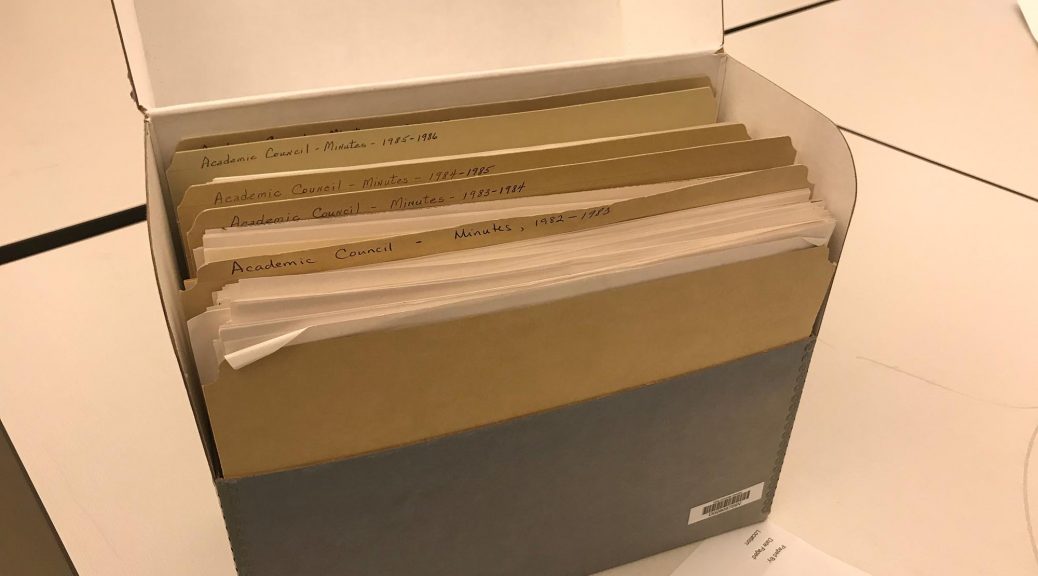 Academic Council first indicated their interest in faculty files and records management with an announcement at the January 21, 1982 meeting, declaring that “the Executive Committee will shortly appoint a three-person ad hoc committee to ascertain what university files are kept on faculty members and who has access to them.” The Ad Hoc Committee on Faculty Files was established the following month at the February 18, 1982 meeting and consisted of committee chair Professor Paletz (Political Science), Professor Weistart (Law), and Professor Dearlove (English). The focus of the committee was on identifying university files that contained information on the faculty, including whom had access to those files.

As part of their work, the Committee drafted and sent out the aforementioned memo to university departments, seeking data to report back to Academic Council. Some of the questions asked in the survey are still asked by records managers today including: Who has access to the files and under what conditions? What is the content of the files? Who purges or expunges files? When are they purged?

While an initial report from the Ad Hoc Committee on Faculty Files was expected in March 1982, it was not filed with Academic Council until May 25, 1982.  Sadly, the actual report, including the results of the records survey, appears to have been lost to time. The Executive Committee of Academic Council provided a brief update on the report at the September 16, 1982 meeting, with the promise that further discussion would take place once the report had been more closely reviewed. This update did clarify the reason for Academic Council’s interest in faculty files: “the concern is with faculty rights to access of their personnel files, the ability to correct factual or other errors contained in those files,” and the absence of a clear University policy on faculty files.

The development of this policy stayed on Academic Council’s radar, and at the May 5, 1983 meeting, they reviewed a proposed policy draft. This review resulted in over five pages of documented discussion on faculty records issues. Major issues touched on during the discussion included the number of files to be maintained by the administration, who within the administration should be responsible for maintaining files, and whether information should ever be removed from files, and if so, under what conditions. There was also an in-depth discussion of confidentiality, particularly as it relates to faculty recommendations and the university’s procedures for appointment, promotion, and tenure.

After this substantial discussion, Academic Council agreed that a clearer policy was needed and decided to resume talks again in the next academic year. As far as the Academic Council records show, the policy discussion never resumed at this level.

11 of My Favorite Haitian Creole Expressions from the Radio Haiti Archive
I Wander all Night in My Vision: Commemorating William Gedney and Walt Whitman
SLGs Have Their Roots in Woman's College Experiment