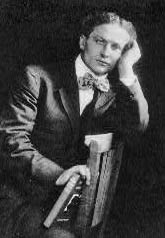 While searching through Duke’s Parapsychology Lab materials, I uncovered some evidence that Houdini himself had at one point contacted J.B. Rhine. As an amateur magician and great fan of the folks over at the Rhine Research Center, I had to know more.

After doing some digging, I found this photo in the Rubenstein’s Picture File:

The writing on the back of the photo may be difficult to read, but it says, “J.B. Rhine Best wishes, Houdini.” Armed with proof, I scoured the guide to the Parapsychology Lab Records for the letter that I was sure accompanied this photo.

I soon found this to be much more difficult than anticipated. Although the correspondence folders have been kindly indexed, I saw no entry under Harry Houdini or under his other names (Erik Weisz, Ehrich Weiss, or Harry Weiss). It seemed that The Handcuff King had found his way out of our records.

This is an item that I immediately wanted to share, but I wanted to share it with some context so I expanded my search. As it turns out, Houdini was a great admirer of President Lincoln (you can read more about the quirks of his personality here) and the Harry Ransom Center in Texas has some proof of this in their collection of Houdini’s personal papers. Wondering if perhaps staff had some answers to my question of how this photo came to be at Duke, I sent an email to what I thought was the reference librarian for this collection.

That email address was no longer operational. I then tried to email someone in an admin position in the center to ask them to refer me to the right person, and I await a response.

Even though I didn’t find exactly what I was looking for in time to write this post, I think the things I found during my search are just as valuable. As a long-time fan of Houdini, I had heard stories of his passion for debunking fraudulent soothsayers and mystics but I didn’t realize just how deep his fascination went.

In addition to the collection of personal papers at the Ransom Center, I discovered that throughout his life, Houdini had also been an avid collector of books- to the point that his collection is considered to be one of the largest in the world on the topics of magic, witchcraft, demonology, psychic phenomena, and spiritualism (this post has some great links to see what some of those are).

It’s the biggest collection I’ve never heard of, and it’s remarkable to think that someone who lived on the road like Houdini did had the time, space, and motivation to hunt all of these down- I can only imagine the shock on librarians’ faces when, after his death, the collection was delivered to the Library of Congress.

While I was digging through the Library of Congress’ holdings, I found a digital copy of the photo that started this whole adventure: Houdini and the ghost of Abraham Lincoln. As it turns out, the photo was a result of one of Houdini’s many efforts to debunk a mystical fraud. As the Library of Congress describes, the photograph was created to illustrate “how a photographer could produce fraudulent ‘spirit photographs’ that purportedly documented the apparition and social interaction of figures from beyond. Demonstrating the company he could keep if the right technique were employed, Houdini had himself photographed with the ghost of Abraham Lincoln.”

To tie this back to J.B. Rhine, Houdini’s efforts with the Lincoln photo were published in the read Journal of the American Society for Psychical Research, a publication that later declined to publish one of J.B. Rhine’s own papers debunking a medium named Mina Crandon.

Thank you for reading this long post about the beginning of my journey down this rabbit hole, and I hope you’ve found something in it that piques your interest. Houdini and J.B. Rhine were pioneers in the study of psychic phenomena and we’re very fortunate in the Rubenstein to have a wealth of materials on the topic because of the Rhine Center- who knows what might still be waiting to be found in one of those boxes?

Correction: An earlier version of this post had the incorrect name for the Journal of the American Society for Psychical Reserach. Thanks to an astute reader for alerting us.