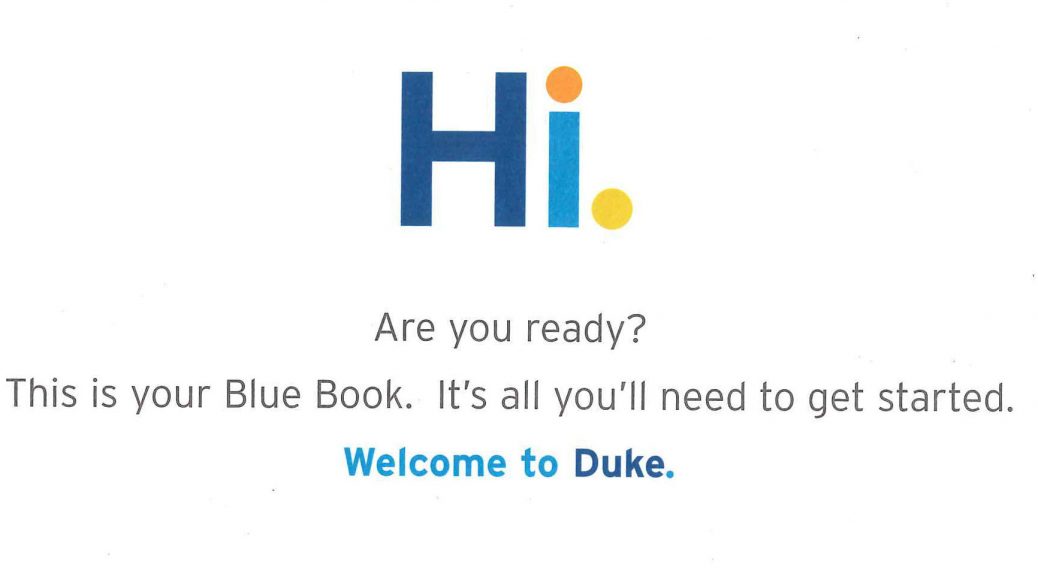 Hello new friends who are arriving on campus this week! Duke is big and busy and multi-faceted and, well, sometimes you need a guidebook. (And there’s no shame in that; I’ve been here for 14 years and I sometimes still need a guidebook.)

First things first, it’s Orientation Week, so of course you need a guidebook to orientation week activities (for you and your parents), just like these 1971 orientation schedules for the Woman’s College and Trinity College/the School of Engineering (coincidentally, this would be the last year of the Woman’s College, which merged with Trinity College in 1972). That year, your orientation activities would have included a Union “Happening,” whatever that might have been, and a discussion of The Lord of the Flies. If those events were signs of their times, then so too was the “Welcome to Personal Computing at Duke” session you would have taken as part of the 1989 Orientation Week. You’d also have taken part in the inaugural annual address to the first-year class by poet, author, Wake Forest University professor, activist, and legend Maya Angelou, which is pretty enviable in my opinion. Starting with the class of 1970, you’d also receive a class directory (sometimes referred to as a “pic book,” since its main feature was photographs of your new classmates). Initially published by the Associated Students of Duke University (Duke’s student government until 1993, also known as ASDU), they’ve more recently been a gift from the Duke Alumni Association. This page from the Class of 1992’s directory includes a now-famous alum. Let us know if you spot her! We’ve digitized these, if you’d like to browse through a few decades of hairstyle trends.

As with any community, there are policies and rules meant to ensure that everyone has a safe and positive experience. These were outlined in The Duke Handbook (admonishingly titled The Duke Gentleman from 1965-1968) and the Woman’s College Handbook.

Woman’s College students took a two and a half page “exam” about the regulations outlined in their handbook as part of their Orientation Week activities. A question from the 1964 exam reads: “What procedure would a student [follow] if she wishes her brother to carry her record player to her room?” and yes, I’ve asked most of my colleagues this question this past week. I don’t actually know the correct answer—any alums reading this who can help us out in the comments?

But wait! If you were a student at the Woman’s College, one handbook wasn’t enough. The Social Standards Committee of your Woman’s Student Government Association provided you with a guide to proper campus etiquette called “It’s Not in the Handbook” (late 1940s-mid-1950s) or “Design for a Duchess” (mid-1950s-early 1960s). This 1954 edition promises “frowns unlimited” to students who “wear socks to the Union for Sunday dinner” or “use the phone as if it were a personal possession.” (You were to wear hose to Sunday dinner and yeah, there was one phone for your entire dorm.) Design for a Duchess did also advise you to keep up with studying so you don’t have to cram, get plenty of sleep, and eat breakfast, which is still pretty sound advice.

In the late 1960s-1970s, progressive students appropriated the handbook concept to create an “unofficial” guide to Duke called The University Experience. In addition to some fantastically psychedelic covers, the table of contents from the 1974-1975 edition below shows some of the voices that were beginning to speak out and claim space on campus, with articles titled “Duke’s History of Feminism,” “Being Black and This Being Duke,” and “Being Gay and Proud.” (There’s also an article titled “Journey through the Archives,” which I’m fond of.) You can browse through digitized copies of all of the issues here.

(And this type of handbook is alive and well in the recent Duke Disorientation Guides; here’s the 2018 issue!) There are stacks of guides to student organizations, including guides to Religious Life groups on campus and to club sports and recreational activities, but let’s just focus on one of my favorites: this 1930s handbook from Duke’s Young Women’s Christian Association. Yes! The spinner on the cover really spins! Of course there’s a guide to the Libraries. And a 1982 guide from ASDU—titled Bull on Bull: Duke’s Guide to Durham—reminding first-year students that they should get off campus and explore Durham! It’s also digitized, if you’d like to see where Duke students hung out in 1982. Hmmmmm. Do I love these handbooks so much that I found it difficult to choose which ones to share and just . . . included way too many here? Yes, and I apologize. Please don’t feel overwhelmed, new friends. You’ll figure all of this out more quickly than you think you will—and until then? Just ask anyone on campus! We’re the best guides around! Good luck this year and come visit us at the Duke University Archives!

One thought on “So Many Duke Handbooks”