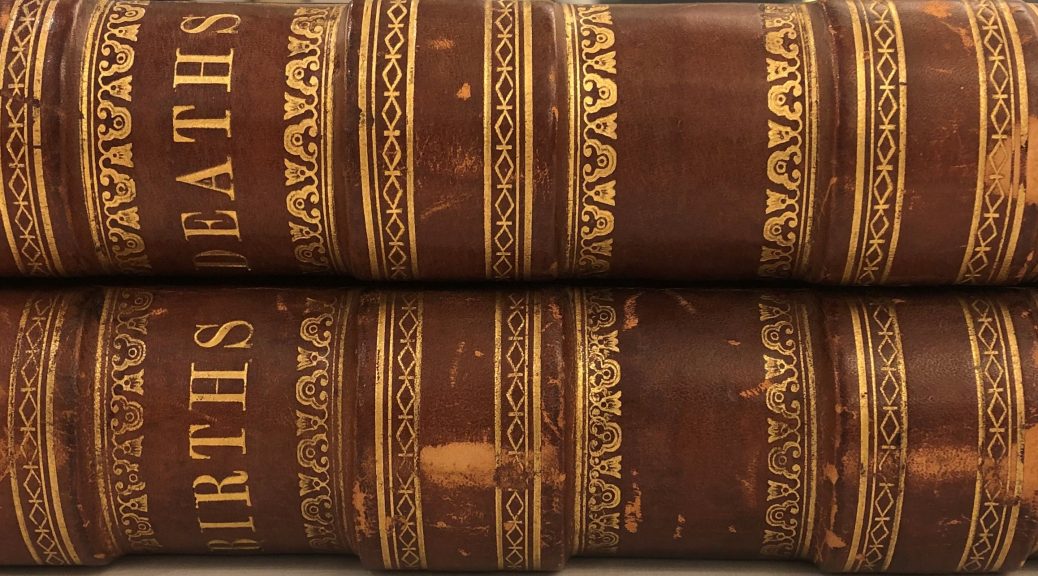 A pair of books, nearly identical in appearance, live on the shelves of the Rubenstein Library. Both are beautifully bound and were clearly well-maintained by their original owner, Dr. Charles Brayton, who used them throughout his 19th century career. Despite their outward similarities, these books are almost exact opposites. Brayton kept one volume to document the births he attended and the other to record deaths in the same community: Stonington, Connecticut.

As a practicing physician from the 1870s to the early 1900s, Brayton provided care for many members of this community, which numbered around 6,000 to 8,000 at various points in his career. These books give us a sense of what life in 19th century New England was like, thanks to Brayton’s thorough records.

Each volume documents different types of information. The “List of Births” included the date (and sometimes time) of each birth, the child’s name and gender, the parents’ names and ages, and the baby’s surname. Dr. Brayton also sometimes described the parents’ race, where they were originally from, and any significant details about the birth. The timeline for this volume extends so far that it includes some instances where the babies Dr. Brayton had delivered later grew up and he delivered their children as well.

Tracing new mothers back to their own births happens on several occasions, including for Theodora “Dora” Sylvia Holland. Dr. Brayton delivered Dora at 10:15pm on July 3rd, 1877. His notes indicate that this is Theodora A. Daveny Sylvia’s fifth labor, but there are no anecdotes or records of complications. Reading through his notes from the decades that followed, Dora’s name reoccurs several times. Dr. Brayton delivered six of her children! Dora’s first adult occurrence in this book (after her own birth of course) was in 1896 for her second labor. Mrs. Dora Sylvia Holland gave birth to a baby boy at 5:50pm on May 11, 1896.

Conversely, Brayton’s “Record of Deaths” lists the date of each individual’s death, their name, approximate age (if he knew), and reason of death. For some individuals, he also included their relation to other community members and their place of birth. On some occasions Brayton included even more information, such as a narrative of the events leading up to the death.

This is the case for Dr. William Hyde, who died of consumption at 64 years old after spending nearly half of his life with the disease. Dr. Brayton describes Hyde as “a good friend to me and my preceptor in the study of medicine.” Brayton undoubtedly experienced a strong reaction to the passing of his teacher. Brayton’s record goes on to eulogize Hyde by listing his family and accomplishments, though unfortunately none of his five children lived longer than Hyde himself.

Records like these shed light into the practices of those that lived centuries ago. We use these books and others to help Duke medical students and undergraduates understand the historical context of the practices that they learn about in their coursework. Dr. Brayton’s records help us see the ways of life in 19th century small-town Connecticut, even if just through the lens of one man’s professional career.

Dr. Brayton’s List of Births and Record of Deaths are available to view in the Rubenstein Library’s reading room. Click here for more information about using our collections.