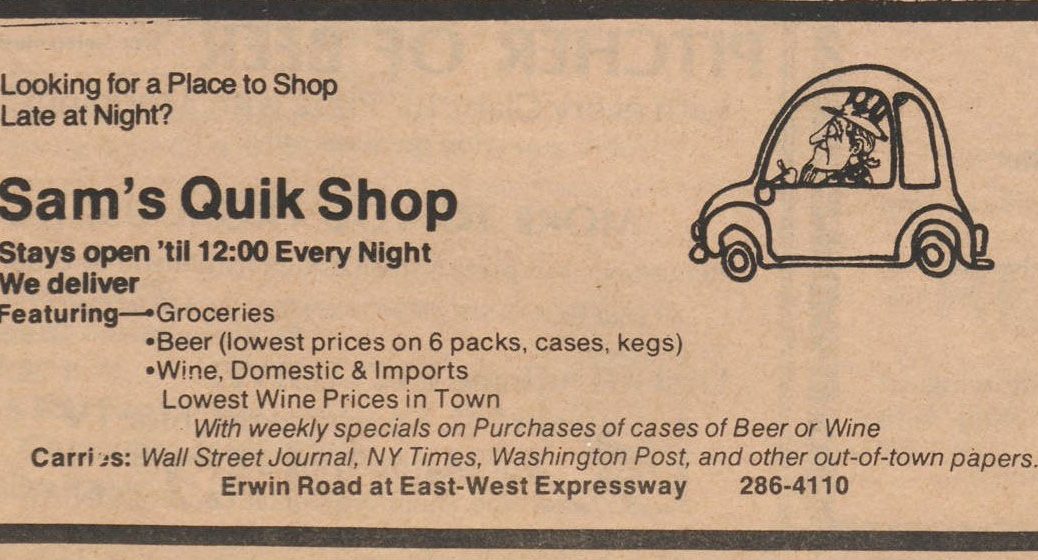 Spend a moment chatting with me and there’s one thing you’ll likely learn: I really like beer. Since my arrival in Durham nearly a decade ago, I’ve spent an uncomfortable amount of my income at Sam’s Quik Shop. It’s changed a lot since my time here—expanded indoor space, the addition of outdoor seating, a less surly staff. However, it has always been a hub for me, a family-owned bottle shop that still feels like the Durham I met years ago. In an evolving cityscape featuring more new high-rise condominiums than personality these days, Sam’s is iconic. Like many local beer drinkers, I was stunned but not altogether surprised by the news that the bottle shop will close at the end of the month and the property sold. As a beer-loving member of the Duke community I started thinking about what Sam’s, in all its historical iterations, has meant to generations of Duke students. Taking advantage of resources available in the Duke University Archives we catch a glimpse of the evolution of Sam’s and a feeling for what the institution meant to generations of Duke students.

In the 1950s, when the Woman’s College was still active, codes of conduct choreographed interactions between men and women on campus. Consequently, students sought friendly establishments off campus where they could socialize freely. One of these was Sam’s Blue Light Basement, named after the hit song “The House of the Blue Lights,” which opened its doors in 1954 to students eager for a new nightlife spot in the city. Modeled on the German Rathskeller, students could dance to juke box tunes, drink beer, and mingle in proximity to the opposite sex, all without the heavy hand of administrative oversight. In a 1981 profile of Sam’s Quik Shop in The Chronicle, owner Sam Boy spoke fondly of current Duke students who tell him that their parents “came a courtin’” to the Blue Light years earlier.

While the basement boomed, the ground floor Blue Light Cafe thrived as well, with locals and students alike lining up for the drive-up food delivery. During the annual Joe College celebration, a mainstay of every Duke students’ social calendar in the 1950s, students found the time between scheduled events for a trip to the Cafe. “At 5 the lawn concert breaks up . . . a quick stop at the Blue Light for an in-car supper,” reads a poetic homage to Joe College weekend in the 1955 Chanticleer. The in-car service was so popular that by the 1960s local police were required to direct traffic on busy weekends. “Cars were lined up outside looking for a place to park,” Sam Boy remembered. In 1974, Sam and his wife Gerry converted part of the business into a convenience store, changing the name to Sam’s Quik Shop, while retaining the neon Blue Light sign that adorned the facade.

The Quik Shop became a one-stop establishment for anything one might need. From convenience store staples to automotive supplies, the Quik Shop had it all. However, alongside the self-serve carwash, books and newspapers, and VHS rentals (over 3,400 titles!), beer was the most prominent feature of their offerings. Sharing shelf space with standard brands like Miller, Budweiser, and for those with an aversion to beer, Bartles and Jaymes and a large selection of wines, the Quik shop also stocked less familiar names and imports like Old Peculiar, Glacier Bay, Chihuahua, and Sol. “That’s our drawing card as opposed to the supermarkets,” noted a prescient Sam Boy in 1981. Sam’s found its niche.

By 1984, a legal drinking age of 21 put beer drinking by law-abiding college students out of reach. However, thanks to advances in home computing technology and photo editing software, a surfeit of fake IDs hit the nightlife scene in the late 1990s. During this scourge of lawlessness, many Durham drinking establishments reported an increase in fake ID confiscation—IDs most easily identified by their atrocious quality. Sam’s on the other hand reported a decline in the number of fake IDs. “Usually we have a whole wall full by the end of the semester,” exclaimed Robert Clark, a Sam’s clerk in 1999. “Right now, we only have four or five.” (If you were one of those lucky students publicly shamed on the walls of Sam’s circa 1999, let us know!).

“It has been said that one cannot stand in the way of progress,” began an editorial by student Marc Weinstein in the October 5, 1990 issue of The Chronicle. The extension of the 147 Expressway to the west turned the area around Sam’s Quik Shop into a construction and traffic nightmare that affected the livelihood of the family-owned business. While approving of necessary infrastructure improvements, Weinstein went on to say that he equally liked Sam’s Quik Shop. “I like being able to snatch a 6-pack of Colt 45 . . . rent Breakin’ II: Electric Boogaloo, and grab some hot pork rinds at 10 on a Friday night,” said the Trinity senior. Weinstein vowed to contribute in some small way to ensuring the survival of this “shoppers paradise” by making extra trips to the Quik Shop each week. His fear, surely shared by many, was that the institution would go the way of Pete Rinaldi’s Chicken Palace, a beloved eatery on 9th Street.

Alas, progress has finally caught up to Sam’s Quik Shop. As another Durham landmark is swapped for clean, commodious living, let us—Durhamites and Duke students alike—mourn the loss of one of the city’s most enduring locales . . . over a beer, of course.