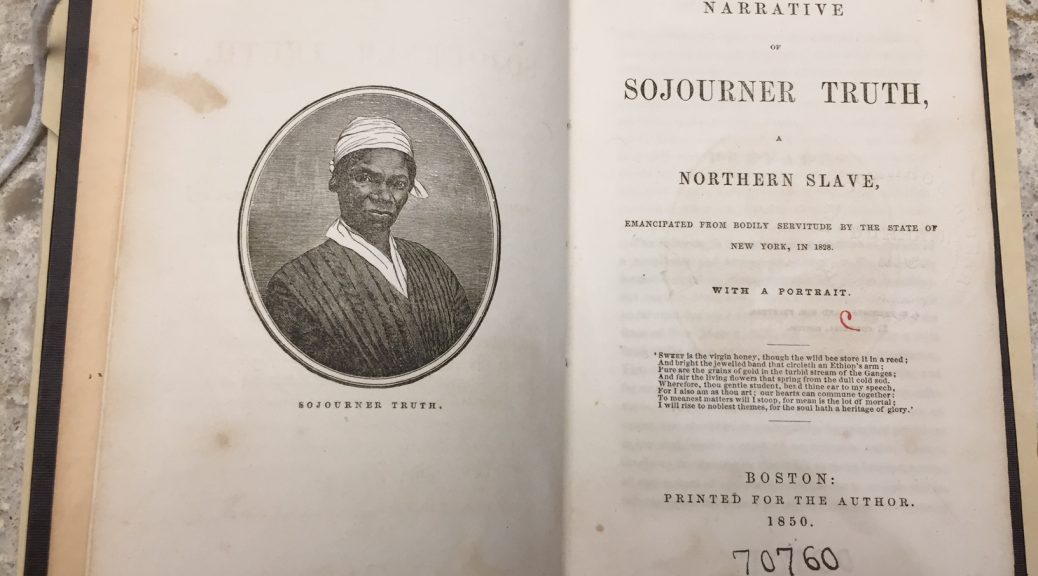 Over the past few years, the Rubenstein Library acquired some early editions of the Narrative of Sojourner Truth. These new acquisitions allowed catalogers in the Technical Services department to reevaluate and re-catalog these editions of the Narrative according to more current standards. We were surprised to find upon searching OCLC, the union catalog used by libraries around the world, that authorship for the Narrative was given to Olive Gilbert in most of the catalog records for various editions. This gave us pause and cause to look more closely at the history of the Narrative, the life of Sojourner Truth, and ultimately how to approach the cataloging of one of the most important books of the 19th century by one of the foremost abolitionists and feminists.

The attribution to Gilbert is problematic given that the first edition in 1850 and subsequent editions to 1878 reference Truth as the author in the publication statement with wording such as, “Printed for the Author,” or “Published for the Author.” Cursory research would show that Truth acted as her own publisher and distributor. This statement confirms that she also considered herself the author. Additionally, Gilbert’s name does not appear anywhere on any 19th century editions of the Narrative. Meaning, those attributing authorship to Gilbert had to be conducting some research into the history of the Narrative, and were likely to come across the fact that Truth was also the publisher and distributor.

What emerged when we looked at more recent research, mostly consulting Nell Irvin Painter’s biography Sojourner Truth: A Life, A Symbol, was unsurprisingly that the history of the writing and publication of the Narrative is complex. This however does not account for this century-long misattribution of authorship.

Truth was born into slavery as Isabella in Ulster County, New York in 1797 (Painter 1996, 3-5). By the time she was a free person in Northampton and beginning work on the Narrative in 1846, she had re-christened herself Sojourner Truth. She met Olive Gilbert in Northampton; they both had been members of the utopian and abolitionist Northampton Association for Education and Industry. Hoping to mimic the success of Frederick Douglass’s, Narrative of the Life of Frederick Douglas, An American Slave and raise enough money to afford her own home, she embarked on her own narrative by dictating it to Olive Gilbert (Painter 1996, 4, 105).

Historians Erlene Stetson and Linda David describe the writing of the Narrative as “that of transforming an oral tradition into written form,” and describe the Narrative as “recorded, shaped, and filled with scribal interpolations by Olive Gilbert” (Stetson and David 1994, 14-15). Painter dedicates an entire chapter of her biography to the history of the Narrative and the role of abolitionist friends like Gilbert and William Lloyd Garrison in its construction and publication. Garrison connected Truth to his own printer, George Brown Yerrinton, who printed Truth’s Narrative on credit. Truth then acted as her own distributor and bookseller (Painter 1996, 110-111).

When reading the Narrative, it is clear that there is not one single voice present; it alternates from third to first person, for example. However, it remains Truth’s story, one for which she had the idea to put to print and acted as publisher, bookseller, and marketer. You can see this history in a manuscript inscription of the first edition copy held by the Rubenstein:

Resolved on this conclusion, we made the decision to create authority records in the Library of Congress authority file that gives authorship to Truth and editorship to Gilbert. With these edited or newly created authority records established, we then went through each of the hundreds of OCLC bibliographic records for the Narrative and updated the authorship to Sojourner Truth.

The project did not quite end there, as the complicated publication history of later editions of the 19th century surfaced during our research. Significant changes to the text were made to the 1875, 1878, and 1884 editions. For example in 1875, in addition to edits to the text itself, Truth decided to expand her biography and had Frances W. Titus edit a selection from her scrapbook, titling it, Book of Life, replacing the original appendix by Theodore D. Weld, Slavery A System of Inherent Cruelty.

Below are the title pages of some of these later 19th century editions, showing some of the change in content over time.

Now Accepting Applications for our 2014-2015 Travel Grants
My Rubenstein Library: Mary Ziegler on The Abortion Wars
Black Presence in the Picture File