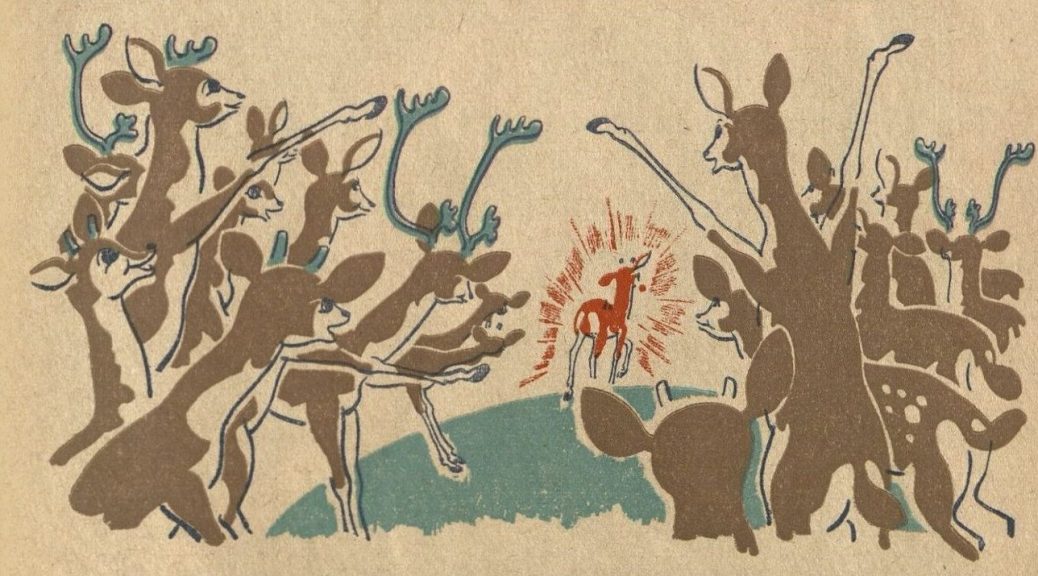 Just in time for the holiday season, the Hartman Center for Sales, Advertising & Marketing History in the David M. Rubenstein Library has acquired a copy of the 1939 booklet that introduced Rudolph the Red-Nosed Reindeer to the world.

Rudolph was invented by a Robert L. May, a 35-year old copywriter, for a promotional campaign at the Montgomery Ward department store in Chicago. May was inspired to pen the story of the humble, resilient, reindeer to cheer his daughter Barbara, whose mother was dying from cancer. Drawing from the “Ugly Duckling” story and his own memories of being ostracized as a child, May wrote a tale of an odd-looking deer whose unusual bright-red nose saves the day after Santa asks him to light the way on a particularly cloudy and foggy Christmas Eve. In the end, Rudolph is feted and admired by reindeer-peers who previously had bullied him. May collaborated with Denver Gillen, a colleague from Montgomery Ward’s art department, to create drawings to accompany the story. Their booklet, which first appeared in November 1939, became a hit, with nearly 2.5 million copies printed and distributed.

Production of the pamphlet ceased during WWII. Montgomery Ward resumed the marketing campaign in 1946, printing another 3.6 million copies. But in January 1947, for reasons that remain unclear, department story executives turned over copyright on the Rudolph story to May. This was a boon to the May family, which was reeling from medical bills accrued during the illness and death of May’s wife. Luckily, the delightful story continued to enchant. In 1948, Rudolph became the hero of a short animated Christmas film. The following year, May’s brother-in-law, a songwriter named Johnny Marks, composed a jingle based on the reindeer’s adventure. The song was picked up by country-singer Gene Autry, whose version would become a smash-hit, selling more than 25 million copies worldwide. This song became the basis of a 1964 stop-motion animated film by Rankin/ Bass Productions based on Rudolph’s story.  The film became a classic holiday special that continues to air today. Rudolph not only saved Christmas, he also saved the May family from bankruptcy. This unassuming 78-year-old booklet introduced an unlikely hero who transformed the life of an Illinois family and the culture of Christmas around the world.