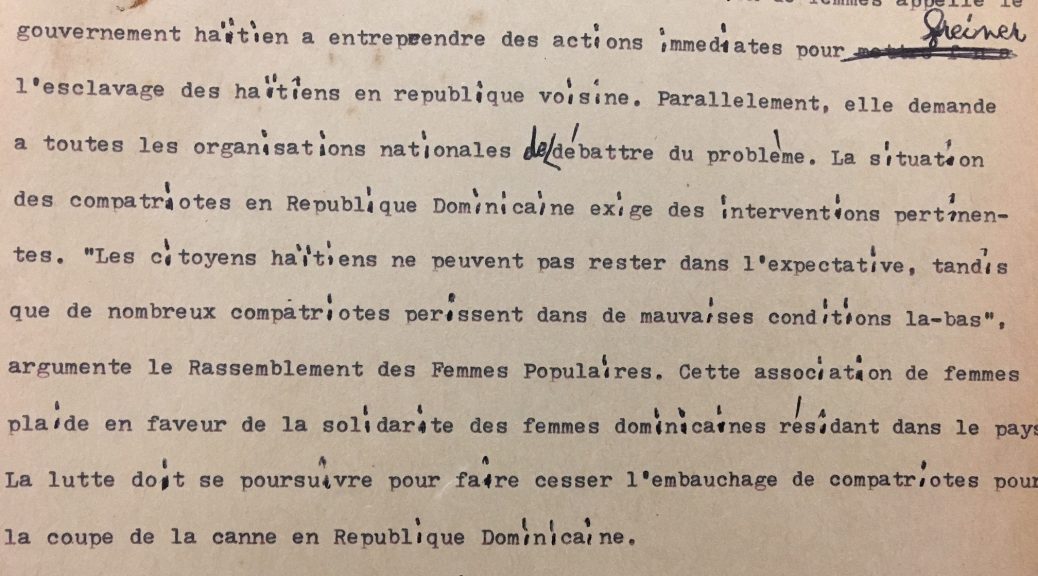 Amidst the ups and downs of life at Duke, one of my most treasured experiences was working as a student assistant for the Rubenstein Library’s Radio Haiti Archives. The collection has over 5,000 recordings covering decades of Haitian history, and listening to just a portion of them was like traveling back in time. While most of the recordings covered the various human and political rights issues of the Haitian people in the last century, they also made me think critically of how quickly the present becomes the past. It’s so easy to look back and judge the actors of the past for their mistakes. What’s harder is to draw parallels between our present and what that will look like to people listening to or reading about our exploits decades from now.

Progress is not granted by some unspoken law of nature, whether we look at U.S. history or the twentieth-century Haitian history covered in the Radio Haiti Archives. The themes in the archives that I found most sobering were the ones that are still being debated today. The first that comes to mind is the treatment of Haitians and Dominicans of Haitian descent in the Dominican Republic by the Dominican state. In 1979, Radio Haiti reporter Sonny Bastien interviewed a sugar cane worker (click on the hypertext to listen to the interviews in Duke’s Digital Repository) who described to Radio Haiti listeners the working and living conditions of a bracero (Haitian cane worker) living on the batèy (squalid camps for braceros) in the Dominican Republic. This worker, in addition to describing being shortchanged for his labor by the sugar cane speculators, describes Dominicans calling him and other Haitian migrants “pigs,” because if his country were in good shape, he wouldn’t be working in sugar cane fields in the Dominican Republic.

The events covered by Radio Haiti also foreshadowed Haitian political issues of today, since the issue of human rights of Haitians and Dominicans of Haitian descent remains a salient issue for the island. Relations between the two nations have been strained from the time of Haiti’s occupation of the Dominican Republic, to the Dominican Republic’s independence from Haiti, to the 1937 genocidal massacre of Haitian and Haitian-Dominican families by the Dominican army under dictator Rafael Trujillo, to the antihaitianismo (anti-Haitian sentiment) pervasive in Dominican nationalism.  Most notably, in 2013 a Dominican court ruling known as the sentencia stripped citizenship from the descendants of undocumented immigrants to the country up to 80 years prior. The result was the statelessness of many who knew no other country than the Dominican Republic, and a massive influx of Dominicans of Haitian descent to a Haiti still reeling from the 2010 earthquake. Many of those who fled had never been to Haiti nor learned to speak Creole. This forced “repatriation” was not a new phenomenon. The Radio Haiti archive contains testimonials of deported Haitian-Dominicans adrift in Port-au-Prince as early as 1976, and extensive coverage of Dominican repatriation policy in the 1990s and early 2000s.

The minimal change between the present and the past is saddening, but it also serves as a mirror reminding me to judge my actions against the human rights abuses of today. Protesting against human rights violations is not a necessity of the past, but an essential component for any nation or group of people to create the change they want to see. Just as most Americans look back at the Civil Rights Movement as a tumultuous yet crucial part of the nation’s entrance to a more progressive age, future generations will look at our involvement or lack thereof with the Black Lives Matter movement. The difference between the past and the present is that there is still time to get on the right side of history. I am heartened by the efforts of activists like Sonia Pierre, a Dominican activist born to Haitian parents on a batèy who fought for the rights of migrant workers and Dominican peasants for most of her life. At age 14, Pierre led a group of cane cutters to march for better wages and living conditions. Pierre was arrested, but the demands of the marchers were met. During her life, she received recognition from her human rights work from Amnesty International and the Robert F. Kennedy Human Rights Award.

In a way, listening to the archives also transported me to the future. The world is no stranger to Haiti’s troubles, be they environmental or political, yet few know how they came about, or how adamantly Haitians refused to be defined by these terms. Radio Haiti gave a platform to Haitians often overlooked by their own government and media, so they could express themselves on issues most important to them. By listening to the voices of the past, I know that the fight for a better future is not a fight I have to enter alone, and I retain the hope that I can add my voice to those that will encourage the next generation to fight on.

One thought on “Bitter Sugar: The plight of cane-cutters on Radio Haiti”