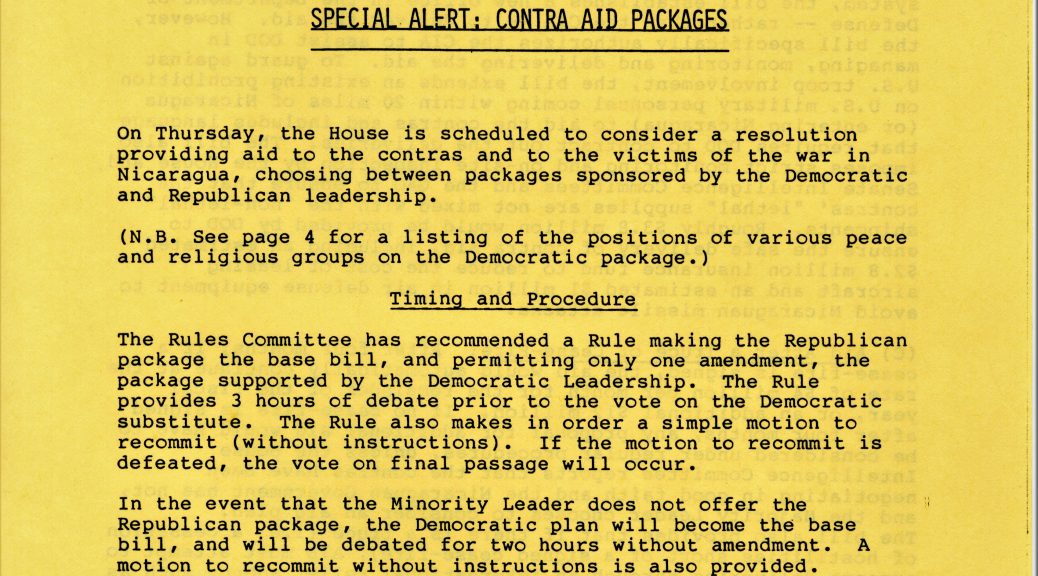 Post contributed by Erik A. Moore  Ph.D. student in the History Department at the University of Oklahoma, is recipient of a 2017 Marshall T. Meyer Research Travel Grant.

This summer I had the privilege of visiting the David M. Rubenstein Rare Book & Manuscript Library to conduct research in the collection of the Washington Office on Latin America (WOLA) records. WOLA’s records are held in the Duke Human Rights Archive. My research was made possible through generous funding from the library through the Marshall T. Meyer Research Travel Grant. Durham is a wonderful city to visit, and the facilities and the staff at the library were great. And the research was fascinating.

I am working on my doctoral dissertation that examines how non-governmental organizations (NGOs) such as WOLA used arguments based on human rights to contest U.S. support of counterrevolutionaries (the Contras) in Nicaragua in the 1980s. The Reagan administration claimed the Sandinista government in Nicaragua was an ally of the Soviet Union and wanted to spread communist revolution throughout the hemisphere. Reagan used the Contras to pressure the Sandinistas to adopt democratic reforms, but, in doing so, Reagan funded and armed a guerrilla force that was accused of committing atrocities against the Nicaraguan people. I am investigating how successful NGOs were at using human rights advocacy to influence U.S. foreign policy. WOLA is as one of NGOs on which I focus in the dissertation.

My work at the library revealed a surprising level of coordination among not only NGOs, but also government officials and Congressional staff members who opposed U.S. support of the Contras. Members of Congress such as Representative David Bonior (D-MI) worked closely with WOLA and other human rights NGOs on issues facing Nicaragua and lobbying other members of Congress to support legislation.[1] I also found a memo from a Congressional staff member, Holly Burkhalter, to the Human Rights Working Group in which she provided analysis of the then-current functioning of the State Department’s Bureau of Human Rights.[2] The Human Rights Working Group was a coalition of national organizations, including WOLA, that periodically met to coordinate efforts toward common goals. WOLA seems to have operated within a large community of progressive human rights-conscious NGOs that often pooled their resources and expertise to influence debates in Congress over U.S. foreign policy. Often, representatives from various organizations met to discuss pending issues and how they could all work together.[3]

This coordination is particularly fascinating for my research because I have found that many of these organizations operated with different agendas, though not necessarily conflicting agendas. One such instance that I found in which the community of human rights NGOs split was over a Contra aid proposal in 1988. Democrats offered a package based on humanitarian non-military aid that served as an alternative to what Reagan and Republicans wanted to offer. The Republican proposal would have centered on military aid. WOLA supported the Democratic aid package in order to bring humanitarian aid to Nicaragua and the rest of Central America and to prevent the Republican plan from coming to a vote and likely passing. Other NGOs, such as the Nicaragua Network, Witness for Peace, and Quest for Peace, all of which worked closely with WOLA throughout the 1980s, opposed any form of aid to the Contras and rejected the Democratic alternative.[4]

Encountering Ghanaian Political History in Durham, North Carolina
The Enduring Power of Witness
If It Walks and Quacks Like a Duck . . .