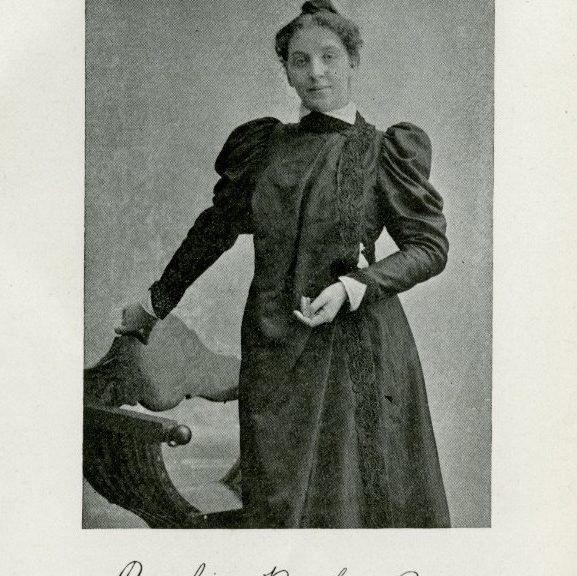 Caroline Bartlett Crane (1858-1935) was an American Unitarian minister, suffragist, civic reformer, educator, and journalist. Among the first wave of college-educated women in the U.S., she worked as a teacher, school principal, and newspaper reporter before pursuing the call to ministry she first experienced as a teenager.

Bartlett Crane was accepted as a candidate for the ministry at the Iowa State Unitarian Conference in the 1880s. In 1889, after ordination and completion of her first church assignment, she began work at the Unitarian church in Kalamazoo, Michigan. Within a short time she led the church to open the first free public kindergarten, a school of manual training and domestic science, a gymnasium for women, a day nursery, a cafeteria, and the Frederick Douglass Club for the “young colored people of the city.” The church continued to expand until it outgrew its building. In 1894 a new one was built and renamed “People’s Church.”  In 1898, after illness and differences with the board, she resigned her ministry.

The Sallie Bingham Center has recently acquired three rare pamphlets written by Rev. Bartlett Crane between 1896 and 1898. Two are sermons delivered in the People’s Church. Why the People’s Church…, published in 1896, outlines Bartlett Crane’s philosophy regarding opening church membership to “any human being who is willing to join in the work of helping the world.” The second, Is God Responsible?, published in 1898, is a reflection and expression of sympathy and support for her congregants after a tragic fire and explosion in a local chemical plant.

The third pamphlet, If I Were Twenty Again!, also published in 1898, offers the accumulated wisdom of a woman who had already had four successful careers and was about to embark on her fifth and final career. Turning to public health and sanitation reform at the turn of the 20th century, Bartlett Crane successfully campaigned for meat inspection ordinances after discovering unsanitary conditions in local slaughterhouses. She founded the Women’s Civic Improvement League in 1903-4. By 1917 Bartlett Crane had inspected facilities in sixty-two cities in fourteen states. As a result of her work to improve urban sanitation, she was known as “America’s housekeeper.”

A tribute to Caroline Bartlett Crane is a small house in Kalamazoo, Michigan which won first place in the Better Homes in America contest in 1925. Bartlett Crane headed a local committee that designed the house to be functional and affordable for a family of moderate income. Called “Everyman’s House,” it was built by volunteers and received national attention. Almost sixty years later Bartlett Crane’s achievements were recognized by her induction, in 1984, into the Michigan Women’s Hall of Fame. The pamphlets are available for researchers in the Rubenstein Library.