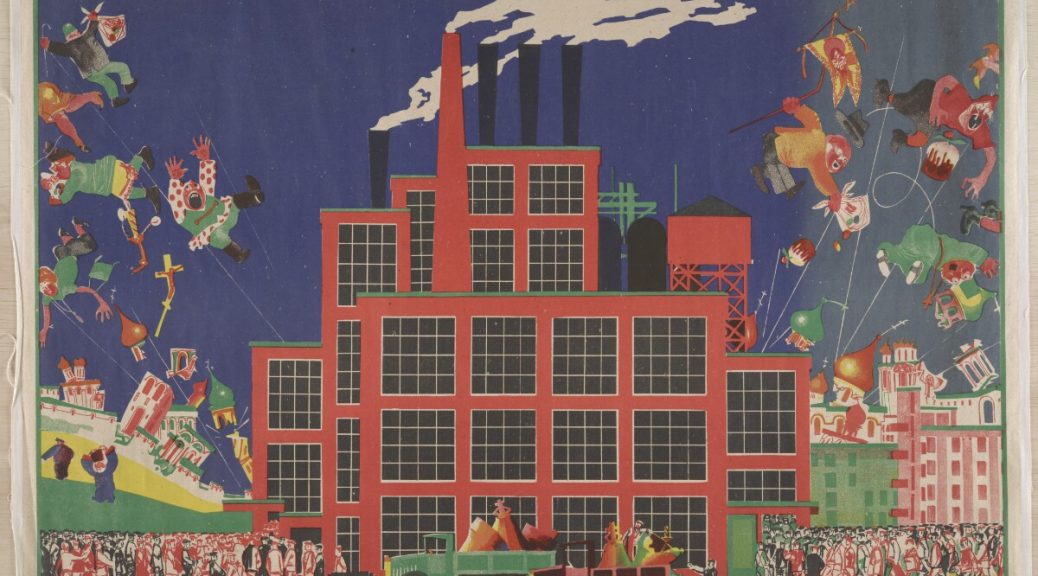 In 2009, while conducting research for a proposal to digitize Duke University Library’s collection of Soviet-era propaganda posters, I uncovered evidence that the handwritten, English-language titles/summaries found at the top of the thirty items in the original, “General Political Poster Series,” were penciled-in by none other than Raphael Lemkin (1900-1959), “the man who criminalized genocide.”

It is well known that, from April 1941 to June 1942, while serving as a “visiting lecturer” at Duke’s Law School, Lemkin worked on the book in which he coined the term “genocide.” Less well-known is the fact that sometime during that same period, the Polish-Jewish jurist was asked to translate/describe the posters that Professor Calvin Bryce Hoover (1897-1974)—chairman of the Department of Economics and Dean of the Graduate School—had purchased a decade earlier, during his research trip to the Soviet Union (1929-1930).

Until recently, it was believed that there were “no documents …in the collection [at Duke] directly relating to his tenure at the university” and that “Duke Archives does not contain material relating to Lemkin except for a biographical file.” However, an accession record created in 1984, during the transfer of the Russian poster collection from Duke’s Manuscript Division to its Rare Book Room, specifies not only that the first thirty items were “the gift of Dean Calvin B. Hoover,” but also that the “titles of the broadsides were translated by Professor Raphael Lemkin of Duke University Law School.”

A comparison of the handwriting on Duke’s Russian posters to surviving examples of items known to be written by Lemkin—such as the draft of a telegram from Lemkin to Mrs. William Dick Sporberg, a member of the United States Committee for a United Nations Genocide Convention, asking her to organize a cable campaign aimed at influencing the American delegation to the UN to support a genocide convention—confirms the veracity of this archival annotation.

Juxtaposing the hand-written, English-language translations with the posters’ original, Russian-language titles not only reveals Lemkin’s command of both languages—two of the eight that were supposedly at his disposal—but also demonstrates his understanding of communist Russia, and of how the “new, Soviet man” might be different from his capitalist counterpart. This information was undoubtedly very useful to Hoover, the acknowledged founder of the field of comparative economic systems.

The posters, together with Lemkin’s handwritten annotations, can be viewed on the new and improved site of Duke’s Russian poster collection, which was migrated to the Duke Digital Repository in April 2017.